I’m trying to figure out how to re-create the good old mlr-reverb in ableton. Those mlr-heads among yourselves know what i mean… Pressing the reverb-button, the reverb starts and fades out, after releasing it, while everything is playing normally… Sure, I mean it’s possible to turn on the effect via midi-controller, but after turning it off the reverb doesn’t fade out - it just discontinues…
Do you see my problem?

(I probably would have problems explaining this in my language, lol.) I was already thinking of that sends/return-stuff, but it’s not working the way i want it…

do you guys have any ideas?

You can do this with “Max Api CtrlEnvelope.amxd” controlling a reverb wet/dry mix.

Thanks for your answer, mate! Unfortunately I don’t know a lot of all this… I’m just that ignorant user dude (please have mercy ;D). Can you guide me through this?

Looked around for a pre-made tutorial and came up empty. Maybe I’ll have time to make one at some point.

Would be very kind of you

Isn’t it just a maxforlive file which i can download somewhere?

It comes with Max For Live, you already have it, I’m guessing.

well i’m on the latest version of live and have max for live and I even found some other reverbs (which don’t do the job either… 2 “Convolution Reverbs”), but found nothing related to “api” or “CtrlEnvelope” ;(

also had a look at ableton’s website, but didn’t find anything

If you can’t see this, then I apologize, I don’t remember where I got it. 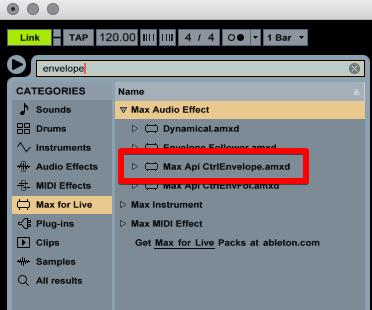 Nope, unfortunately not… ;(
But! Maybe you can send it?!

Found it. It came from here:
https://www.ableton.com/en/packs/max-live-building-tools/

Thank You Very Much

Sure thing. So to make this work, you’ll want to pick the right values in the Track, Device, and Parameter menus, so that you are modulating your reverb’s wet/dry level. Gotta admit, I’m a little fuzzy on what triggers the envelope here. (I haven’t actually built the thing you want, but if I had, I’d have written a better tutorial for you)

Alright, I think I can figure it out

hey @ithkaa, that was my first thought, too, but i’m working with re:mix and all those tracks (for the groups) are MIDI and somehow i can’t activate them…?? my second thought was to route the audio from the master via resampling to the return track. but that doesn’t seem to be possible either…

you can do this with re:mix. the group outs should be on audio tracks. (i don’t think it’s possible to put them on midi tracks) and the send toggle should open/close the send dials on those tracks.

first you need to assign send values for the row(s) u want the reverb applied to, (sends section in re:mix) then when u trigger the send toggle, the track sends will jump to those values. when u trigger the toggle again, your delay/reverb should fade out like u want.

Yay! Sorry I am not so familiar with re:mix. I’m glad there’s a simple method.

Somehow I knew that it’s possible with re:mix, as well…

But I still dont get it, @elquinto… 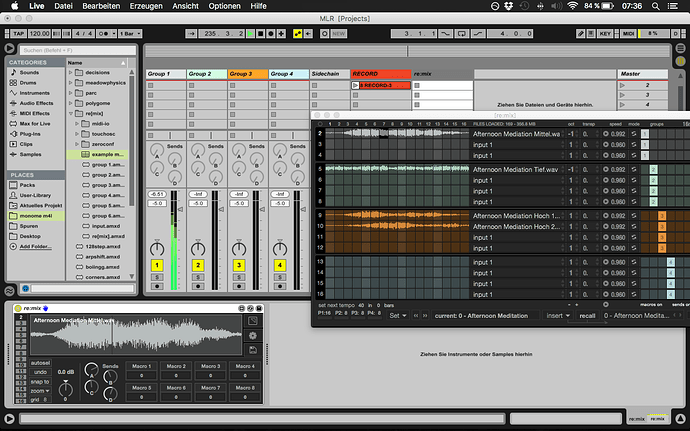