Following a few mentions in the Disintegrating loops thread, specifically: picking up from a comment by @trickyflemming, it seems like a dedicated Reaktor thread might be worthwhile.

With many of us engaging with the Depth Year principles this year, Michael rightly pointed out that Reaktor could be a great asset when faced with urges for new inspiration or obstacles we perhaps can’t find answers with in our existing gear.

I picked it up initially to benefit from some of the incredible user library ensembles - specifically Cloudlab 200t (which just had an update) and Space Echo - but, after hearing about Mark Watt using it as a prototyping tool for his iOS app, Spacecraft, would like to use it to create my own devices to give back to the community too.

I had also read about Euro Reakt, which sounded (both conceptually and in the videos I’d seen) incredible. But of course I would encounter the author here because: Lines

I guess I envisage this as a place to collate user library recommendations, tips for people new (and not so new) to creating ensembles and basically anything related.

For housekeeping I’ve retained the links Michael gave me when I originally enquired about Reaktor threads on Lines:

Euro Reakt is amazing. It’s currently on sale and more than worth the price. It’s worth paying for the updated version – the front-panel patching is super useful. With just Euro Reakt and the built-in blocks, I think anyone would be set for their depth year. (I do have one tiny request, which is for updated documentation – IIRC Michael’s thesis covers the original set of blocks, but some were added subsequently.)

One thing I’ve been doing recently is using Euro Reakt as an advanced mixer, where by “advanced mixing” I mean combining two audio tracks in ways that go beyond just simply adding them. There are a bunch of blocks (eg ring mod, vector mixing, bit mixing) that allow for creative scrambling of multiple signals.

Thanks for the tip - I’ve just added the free block to my Native Access and will have a play around later on. I love that Euro Reakt grew out of a doctoral thesis - I’m doing a Masters by Research at present and am considering how I might be able to create a device as part of my study.

I’m putting the finishing touches on my first “full” reaktor ensemble, an adaptation of the Lyra 8. (Haven’t seen one yet in the User Library.)

One thing I can’t find a lot of good information on is how to handle custom knobs / skins / GUI. I get that I need to use GIMP to make the background and probably knob shadows. There are a few good knob sets on the user library. But they add a ton to the file size? Do I need to keep all the different Instruments that get added? There are shadow files in the ensemble below, but I have no idea how to use them. Knobs

Most tutorials I’ve seen on this part of the job are super high level. Anyone have any suggestions for reference material?

I’m afraid I don’t have anything constructive to add but just wanted to say that a Lyra 8 ensemble sounds like a superb way to kick things off!

Thanks, it should be fun. It’s probably 90% functional, I have the Voices, LFO, Delay, and Distortion done, I’m just trying to figure out how I want to handle some of the feedback and FM routing.

I’m trying to keep it as simple as possible but add a few enhancements, like a stereo signal path with panning for each voice and drone control for each voice. There are few other fun tidbits thrown in as well.

This is something with entirely too much distortion that I liked the sound of. No processing, just what’s in the synth:

That sounds absolutely fantastic! Even taking into account your statement about the distortion, it sounds incredible to my ears!

This is Organism 8 with no effort to skin it, just the stock Reaktor controls. But it is minty green!

Changes from the hardware: 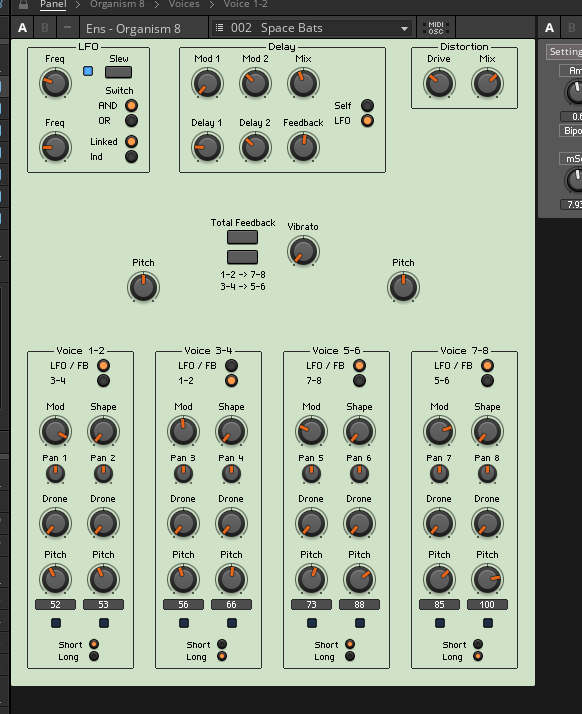 I’d be interested to see what people think. I still want to get it looking pretty before I upload it to the User Library, but maybe I could drop it in a Google Drive folder so Lines people can try it and give feedback?

I can give it a spin today if you want to share. 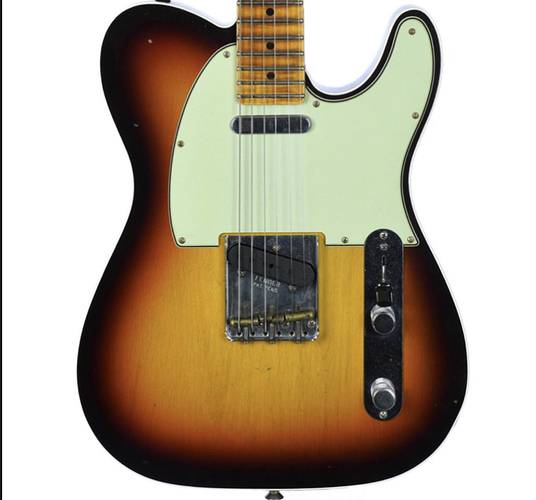 I’d love to give it a test drive

Same, I’d be curious to give it a try especially since I never actually played a Lyra 8, I guess I will at least take this as brand new!

The good news is that after reading through the Blocks template document, I understand the GUI side of things a lot more. That’s the next priority. Then I’ll implement any feedback I get from you fine ladies and gents, and then put it up on the User Library.

There are two snapshots, an init patch and one that I just thought was neat.

The “pads” are only activated by the eight white keys from C2-C3.

Feedback requested: Anything really, but any knobs or controls that don’t act as expected, things that don’t work, etc.

The Google Drive directory below should work, please let me know if you can’t access the ensemble.

I had a play with it today, and it fit nicely into a track I’ve been working on, so thumbs up and thanks!

All up, sounds really good, and a worthy addition to the Reaktor user library.

Despite all the drone knobs and feedback amounts being at zero it did seem to drone on regardless. I didn’t check why (I was using it as an AU within Logic).

I’ve had that a few times, it was just that one of the drone controls wasn’t really truly all the way down at zero. I might have to build in a buffer zone on the knob.

I did find a few times I wanted to be able to control / mix the relative levels of each voice, especially when I had different shapes on each voice.

Can you describe what you mean a little further? If the drone knobs are being used, they are basically attenuators for the oscillators. If being played via keyboard, the velocity will impact how loud each voice is.

I also felt like I wanted to play it across the entire keyboard at times, though I wonder how that should work with the triggering of the 8 individual voices

That’s a tough one, part of the charm of the original hardware is the inherent limitations. Your suggestion is an interesting way to go about it.

I’ve no idea what the buttons in the middle do!

Total Feedback: When this is toggled on, any voice that has its modulation source set to “LFO / FB” will be modulated by the final output of the synthesizer, that is, the audio output after the distortion. The entire synth is feeding back into itself for modulation.
Numbers: Normally Voices [1-2 & 3-4] and [5-6 & 7-8] act as pairs for modulation. If the numbers switch is active, Voice 1-2 will be a modulation pair with 7-8 instead, and likewise voices 3-4 and 5-6 will become a modulation pair. It’s not terribly intuitive on the hardware, either.

There should be hover tooltips explaining those, and I’m adding tooltips for every control.

Thanks for taking the time to write up your observations!

Getting closer… the methodology for doing knobs / shadows / values in Reaktor Blocks, which I attempted to adapt to this, is so awkward and clumsy that I have to believe I was doing it wrong. There’s no way NI could have made it that hamfisted on purpose, so I’ll assume that’s on me.

Instead I’m importing the knobs I need and doing the rest in GIMP / Paint. NET.

Here I imported a screenshot of the Lyra as the background image so I could get the knob layout done. Now I have to generate some shadows and do all the labeling in an image editor so I can bring that in. This has been a big learning experience!

The aesthetics of the panel work out quite well since the two extra knobs I added per voice fit nicely over the contact pads. 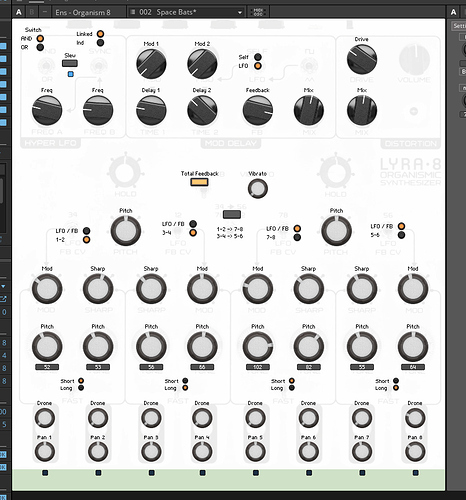 There’s no way NI could have made it that hamfisted on purpose, so I’ll assume that’s on me.

This is a sentence I pronounced out loud many many times while using NI products before finding out, each and everytime… There’s DEFINITELY A WAY.

um this looks great (as someone who never ever made custom graphics for their reaktor work). now to find out how backwards compatible it is…

Thanks. It will require the latest version, which as of right now is 6.3.2.

It is indeed a giant PITA!

Have you tried selecting the panel elements (knob, scale, shadow) in the main/macro/core editor (rather than the panel editor).

Select the items you want to move together in the main editor (shift+click or click and drag).

Shift click on one of the corresponding elements on the panel editor (e.g. the knob) and all the elements should move together.

Hops this makes sense (?) and helps.