Looks great by the way!

One suggestion/idea I would have (that I wish my real Lyra had) is a way of quantising each voice to a scale. Tuning the Lyra to ‘traditional’ scales can be a real pain, having someway of achieving this on a virtual version would be super.

There is a really nice Scale macro on the Spiral sequencer ensemble included in the Reaktor Library.

I did find a few times I wanted to be able to control / mix the relative levels of each voice, especially when I had different shapes on each voice.

Can you describe what you mean a little further? If the drone knobs are being used, they are basically attenuators for the oscillators. If being played via keyboard, the velocity will impact how loud each voice is.

I was playing via keyboard, and did end up using velocity as you said, which works fine. However, the brighter (more shaped) oscillators generally sounded quite a bit louder than the softer (less shaped) oscillators at the same velocity. Not really an issue as such, but it means that as you play the keys you effectively need to play with different velocities per finger / note, or adjust afterwards (which is what I did). Only if you’ve setup the 8 oscillators with different levels of shape.

If there was an overall level adjustment per oscillator (separate to drone level) you could balance things how you like … at the expense of complexity / more knobs. Not sure it’s really necessary though.

I also felt like I wanted to play it across the entire keyboard at times, though I wonder how that should work with the triggering of the 8 individual voices

That’s a tough one, part of the charm of the original hardware is the inherent limitations. Your suggestion is an interesting way to go about it.

Agreed. The physical Lyra very much feels like NOT a keyboard … so maybe this ensemble should be true to that.

Yeah, I did all that selecting business, but it’s incredibly cumbersome when it comes time to do the overall layout. I guess for single Blocks it’s not such a big deal since they’re much smaller! Also this means you can’t move multiple controls at the same time, which is a huge downer.

Tuning is something I’ve thought about, right now the knobs are not infinitely adjustable, they are using the default Pitch input resolution which is a half-step. Right now all eight voices can go the full range of the oscillator, maybe I should “restrict” them to lower voices on the right and higher on the left to make tuning easier.

If there was an overall level adjustment per oscillator (separate to drone level) you could balance things how you like … at the expense of complexity / more knobs. Not sure it’s really necessary though.

I see what you’re saying. Once I’m done doing the UI I’ll see what I can do. Maybe it could be as simple as increasing the level of the triangle oscillator relative to the saw/square so they’re naturally more balanced.

Almost done with the UI now, couldn’t sleep last night so I just kept plugging. (Obviously the middle section is a bit haphazard.) 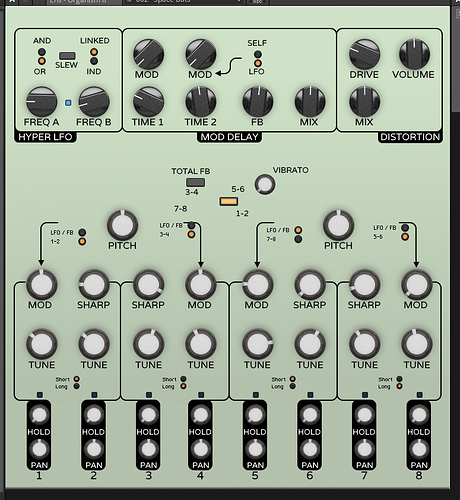 Having the voice banks in ascending range of pitch would be cool (and follows how the real Lyra works).

I can easily add a scale function so don’t add that to the list.

The one thing I would say; having independent hold controls could limit the potential for using an important (IMO) real Lyra technique; using hold to play cluster of voices, or even chords if you can get it tuned (no small feat

Looks very cool! I already included a bunch of sounds from your ensemble in a track. Very much on board with the “not a keyboard” thing, although it could be great to have that option but I’m not sure. So far so good from where I stand, it seems great and weird in the way I’d expect the hardware to be.

Off he goes. Feels like just yesterday I was getting started, now it’s time to pat him on the bottom and send him off to be horribly maligned by the internet. Circle of life.

Note that if you played with the beta (which I’m taking down now), the snapshots will need to be re-saved. I changed the switches for Fast/Slow to a toggle. 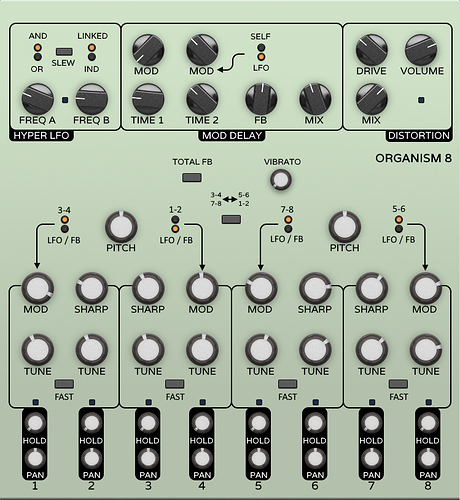 Brilliant! Will be grabbing it this evening - fantastic work!

I agree the final version looks stunning, amazing work @hermbot I’m super impressed by how quickly you put this together.

I was playing via keyboard, and did end up using velocity as you said, which works fine. However, the brighter ( more shaped ) oscillators generally sounded quite a bit louder than the softer ( less shaped ) oscillators at the same velocity . Not really an issue as such, but it means that as you play the keys you effectively need to play with different velocities per finger / note, or adjust afterwards (which is what I did). Only if you’ve setup the 8 oscillators with different levels of shape.

I think I figured out part of this. There’s kind of a dead spot in the output when the Sharp control is at 10-11 o’clock. This is due to the way I was mixing and filtering the oscillators. I just tested a different configuration and found a more consistent volume when going from triangle to sawtooth. (At the expense of a tad more CPU, but this ensemble is pretty light to begin with.) This will be one of the first updates I push.

I got an idea for synthesizer with particular interconnected controls, bunch of sine waves and bandpass filters, and so on. Inspired by Lyra-8, Meng Qi Wing Pinger and such. So finally I took a delve into Reaktor proper, and started my first own ensemble outside Blocks interface. I’m only at primary level of course, but it’s surprisingly straightforward so far. Reading some of the documentation and looking around in the software even Core doesn’t look that intimidating. I really should have gotten into this earlier, but I guess a good idea for a project goes a long way when it comes to learning stuff.

Something I’ve been tinkering with is shaping the oscillator output. I wanted to try and add more analog “ripple” that you’d see from a real synth to the stock Primary oscillator.

Basically it’s a comparator that triggers a very short envelope, which is connected to an oscillator running at twice the pitch of the first oscillator. 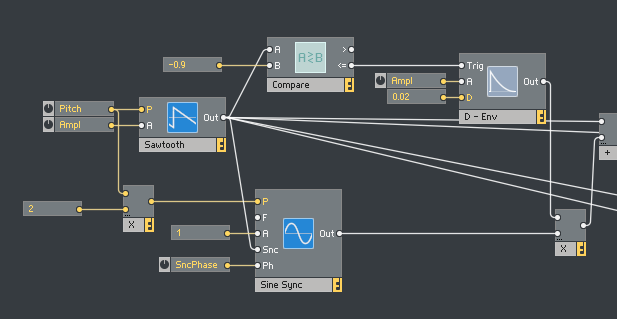 The difference is subtle, and perhaps not worth the overhead. Still, something to toy with.

It’s a really great ecosystem to build up a synth. For some reason I gel with it better than Max/MSP.

Primary can be a bit intimidating. At first glance there is not much difference, but there’s a lot under the hood. I’m just starting to delve deeper into it.

I just found out today that there is a bulit-in virtual keyboard in Reaktor.

This would have been so handy for all the time I spent working on ensembles on my laptop and away from my desktop / MIDI controller. I use Reaper which also has a similar feature, but building in the standalone Reaktor application is so much better.

It turns your computer keyboard from Z to M into a two octave input.

NI has one of these software managers you have to install. This usually stops me from getting software. How irritating is this one?

I don’t find it intrusive at all.

Regarding the mess that NI softwares can be / have been, I find it’s very relaxing to have the NI access thing now. It’s rare that a company have such a bloated ecosystem that these softs are useful but for NI it definitely is. It’s not perfect but it’s simple enough that I never think about it.

I agree. I would be annoyed if I only had Reaktor or any other single plugin and nothing else, but as Komplete 12 owner I’m for once glad for the hub. It doesn’t bother me, works well, generally doesn’t suddenly forget my login info etc. which I can’t say about all the other software hubs. For managing a lot of plugins it’s ace, and with Slate Everything Bundle I actually wish it had a central installation/manager program.

I’ve personally taken a hard line against any manager software or hardware licensing (I’m looking at you, ilok), but NI is the one exception. And I have to say, theirs is pretty darn good. Makes updating and installing a snap. No issues with it at all.

I finally had the time and energy to finish up the synth I mentioned earlier, 4 voice drone synth, and make a little Youtube demo too. Super happy with how this turned out and I’ve already used it on couple of tracks I’m working on. First entry on User Library.