A companion receiver mod for Norns broadcasts on https://broadcast.norns.online/
See thread on @infinitedigits broadcast here.
It receives streams (live or archived) from Norns users and plays them back through the Norns input. 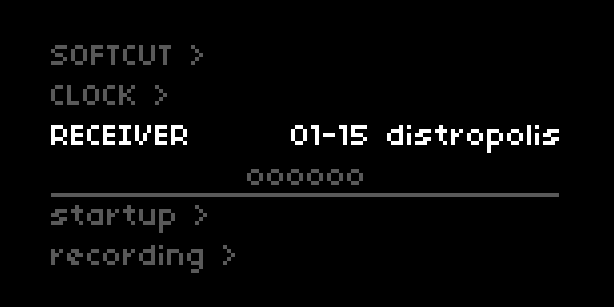 It’s lots of fun to play over/sample other people who are or have been recording!

norns, internet connection, MPV installed, a running script (it will update what’s available on the broadcast website upon loading a new script)

When this mod is installed, plus MPV player (instructions), it will look for MP3s up on broadcast.norns.online and will list them in the PARAMS menu when a script is loaded (not under the mod, but in the PARAMS menu!)

There you can select a stream, either live or archived.
WARNING! You CAN run the broadcast mod and the receiver mod at the same time, and even listen to your own stream, you will however get feedback

Lots of room for improvement, such as:

220122 - Fixed live streams not properly playing, would only take archived streams
100422 - Updated to be compliant with new website (still scraping… this should change some time)

so cool!! do you need an endpoint that lists the current live streams being advertised? that’s easy to add

Thanks! I think that, and an endpoint of the archived streams would be wonderful, instead of my hacky, web-scraping ways

Edit: Also, feedback is totally possible, doing it now- so funny to use this ‘internet-looper/delay’

it’s about three second delay round trip for me.

I have had an exciting morning following your thread with this around Lines, really appreciate your work. I was able to stream aporee to the input from the command line, then got your mod for it working, then installed Receiver and it too is working well. I then tried to Broadcast and Receiver at the same time and Broadcast shows as online and public in the mod menu but it doesn’t show up on the broadcast.norns.online page and doesn’t show as a selection in Receiver. I then thought to disable the Tending the Waves mod and restarted a couple times but can’t get Broadcast back. any ideas?

Hey! Thanks! And how strange- did you do a full sleep/power down & back on cycle, maybe uninstalling Tending… in the process? Might help.
I think the first step should be getting Broadcast to work and your stream showing up!

When you run it, does Matron show anything?

with several restarts and full power cycles interspersed I first tried to just uninstall TtW, no change, uninstalled Receiver, no change. I then tried to uninstall and reinstall Broadcast but that also didn’t change anything. I could then create an archived file on the broadcast page if I go online with the archive on, but it is a null file ultimately and I don’t show as online while making it. then I decided to go full nuclear and uninstall MPV and even that didn’t change it. I will check out maiden and see if I get anything. thanks for your help.

So strange!
I am wondering though, how to debug mods? Do they show up in Matron if something is wrong- I’m not sure. Have to figure it out myself.
But by all means, please first reinstall Broadcast and when you restart Norns, let us (or @infinitedigits ) know what comes up in Matron.

Hello! So I ran into this similar issue. I had receiver working wonderfully, but after updating it wasn’t appearing under the params. Broadcast is working perfectly fine. Uninstalled, receiver then reinstalled. It shows under params now. But I can’t turn it on and it’s stuck in the off position. I’ve attached a few screenshots from the terminal. I have no clue what I should be looking for. But if there’s absolutely anything I can do to help fix it, I’m more than willing to. Absolutely loved this when it was working and really can’t say enough how much id like to get it working again. 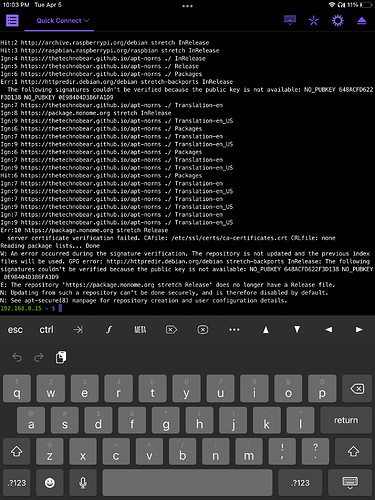 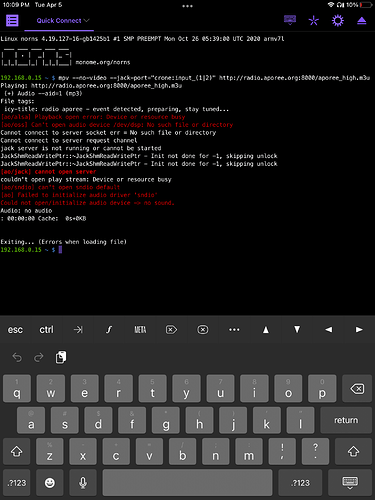 Receiver works for me, on updated norns. Currently in Westminster Abbey

Tried that one. Still no luck. Tried restart and sleep then powering back on.

Alrighty, I’ve been messing with this some more. before, i wasn’t getting anything in maiden, but after uninstalling and reinstalling receiver a few times, then selecting a few different scripts. I got

Testing with other scripts. Tried with oooooo, and got this

;calling: my init hacks
RECEIVER mod up and running

I guess it’s up and running, but the E3 can’t turn it on?
But further down in maiden is this.

::Update::
Finally got this working again. After uninstalling, deactivating all other mods. Installing Tending Waves, then reinstalling Receiver it started right up. No clue why. Still more than willing to help any way I can to iron this out.

i’m guessing the key was missing mpv. (did you install it manually? does one of these scripts attempt to install it on launch if not found? etc)

(one thing about the new image is that it will for sure wipe away any attempts to add or upgrade (!!!) other programs or OS components.)

None of my scripts tries to install any external package- you always have to install mpv by hand.
Sorry for not reacting- life’s busy. Very happy you got it working. Seems that installing mpv was the fix

Great to hear you’re enjoying it!
Haven’t tried it myself on the newest image as I have some performances lined up, will not update anytime soon…

Hi all, because of a change in broadcast.norns.online the Receiver script is currently not working… working on it!

EDIT: Updated and working again! Copy the script code or reinstall from: 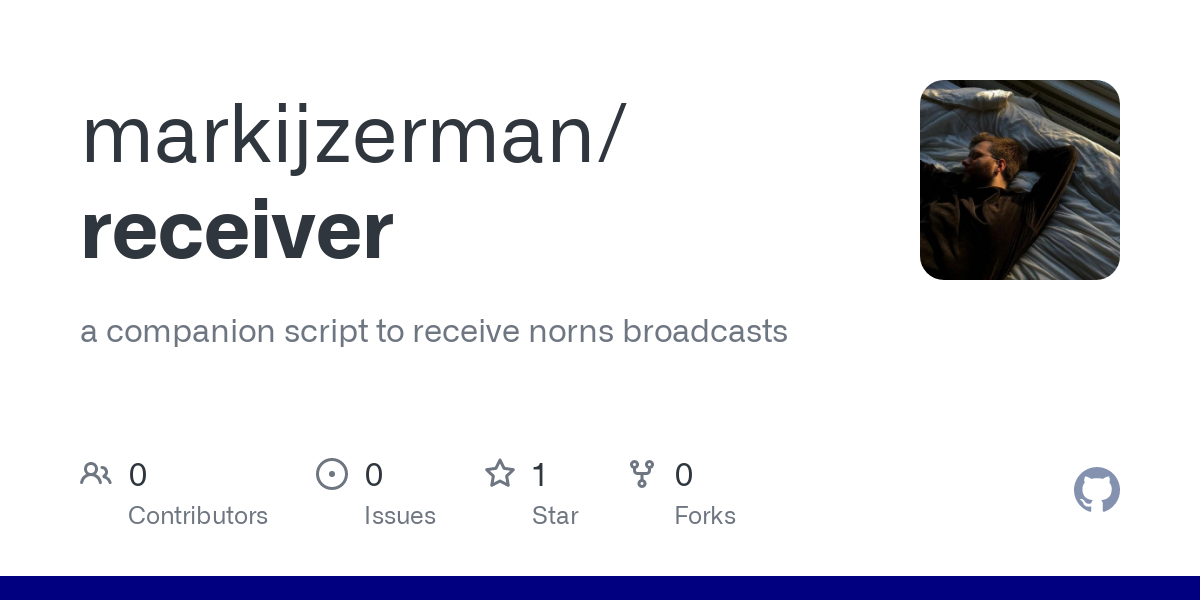 a companion script to receive norns broadcasts. Contribute to markijzerman/receiver development by creating an account on GitHub.

After quite a bit of futzing about, it seems to be working, though here is an example of some matron output when it does work:

Not sure if there is any cause for alarm here, but thought I’d run it by the community

there is no specific cause for alarm here, we’re seeing reports of these warnings when new processes are launched and connections made by scripts, and will look into it.

Hello again! Just got my Norns updated on the latest firmware, jumped straight over here to install the mod. Got mpv, tending waves, broadcast, Norns.online, but for some reason I’m not seeing radio under the parameters menu. Any ideas on what step I might be missing?

I haven’t used my Norns or Receiver much in the last few weeks, but is there anything Maiden says in regards to Receiver on startup?

Hey! Sorry for the delayed reply. Totally missed the notification that you responded. I had checked and wrote it down, but I can’t find the saved file. I’ll try and make another note if it happens again. In the meantime, I was just going through some of receivers stations, and came across some people talking through Morse code. I took a video but I can’t upload it for some reason. Shortly before I started recording they were talking about some war on the US. And I all I could think of was Stranger Things S3 or Red Dawn.

They signed off with “Let’s go Brandon”.