i really miss the line-in on my old macbook pro. looking for a small, reliable usb line in converter for sampling in mlr from the modular, contact mic, etc. i have a proper interface already, just looking for something more minimal and compact.

perhaps too minimal for your needs?

Can’t really get cheaper than a Behringer UCA202. Class compliant so you don’t need to fuss with any drivers.

but really worth spending a bit more: motu microbook 2

thanks! those are all great options.

thought i’d follow up on this thread with my decision:
http://www.amazon.com/Behringer-302USB-Xenyx-Mixer/dp/B005EHILV4
adorably tiny, lightweight and cheap. also serves double duty as an analog utility mixer for the modular + op-1

PS. If you have a newer mac then you can still receive a mono input using the headphone jack. The cable you need for this, I believe, is a TWS to TRRS.

as I’m starting to look for live mixers on the mid level range, I’ve seen the microbook a few times. I know @Rodrigo uses one as well. any chance you could you quickly sum up what you like about it, @tehn? I’m on the fence, just need a push.

I would strongly suggest you DON’T buy the Microbook. I loved it and used it for years, but for whatever reason, the driver/interface now runs like garbage on several of my computers. It crapped out on me on a gig, and I had to borrow an interface from another act, which thankfully they had.

Feature/size wise, it was perfect for me, but it got to the point that I couldn’t trust it on stage. I upgraded to a RME, which is considerably more expensive, but it’s a frigging tank and reliable as shit.

If the RME is too pricey for you, I’m very happy with my FocusRite Scarlett. Several different sizes are available depending on your needs. They can run in class compliant mode, which is handy.

oh man. thanks for the update. i wonder if the newest released one (microbook llc) fixes some of these issues – or would just buy a few years’ time.

well, there goes the mid-range prices.

I think that a lot of Apple’s software updates have knocked some great contenders out of the race. the iConnectAudio4+ is reported to have plenty of issues interfacing between iOS 9 and El Capitan, but using one or the other seems to work well for now. that might be the direction I go in.

From the looks of it it has an extra USB port, so you have to have 2 slots taken up to use it. I’m guessing this is due to the power/driver type issues myself (and others) have had.

So from that, I would say the problem is fixed, BUT it looks like you need 2 USB slots.

This is not cheap, and not very small, but after much consideration and numerous trials with different units I have settled for this A&H mixer. It has just enough inputs and outputs that I find it useful in integrating multiple streams straight from the modular, and some additional sources that might be part of the live event, like voice or other instruments or external boxes. It also has a slew of built in FX, which I do use on occasion to augment some stems. Having 12 inputs is huge for me… and there are times, when I wish it had more!
I took these hideous plastic side panels off and now it’s just a simple battleship gray metal box 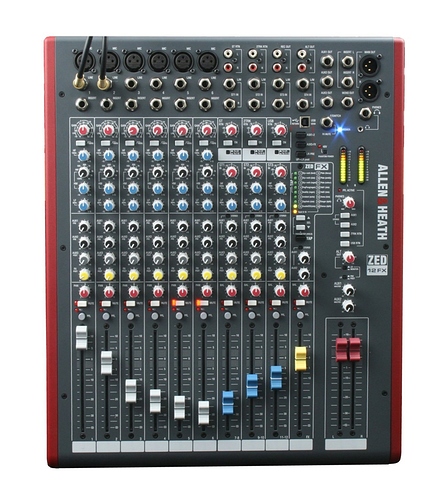 Having said that… all the talk of @tehn designing a performance mixer gets me very excited, and I can’t wait to see what he might come up with!

Careful with the Apogee Duet 2 USB. It’s a mess with El Capitan and shows random audio dropouts. Apogee kinda ignores this with customer support emails that solve nothing.

Careful with the Apogee Duet 2 USB. It’s a mess with El Capitan and shows random audio dropouts. Apogee kinda ignores this with customer support emails that solve nothing.

Ruh-roh. I was planning to bring a duet on a trip next week. Can you point me at a relevant thread? Apogee just boasts compatibility.

Anyone with an Apogee Duet 2 have a problem since El Capitan update?? My card just randomly goes...

Bummer. Thanks for the link @kza!

cheap option for anyone already owning adat converters I guess!