thought it would be interesting to start a discussion on reel to reel tape deck techniques and tricks. i recently purchased a uher 6000 universal (part of their report monitor series). 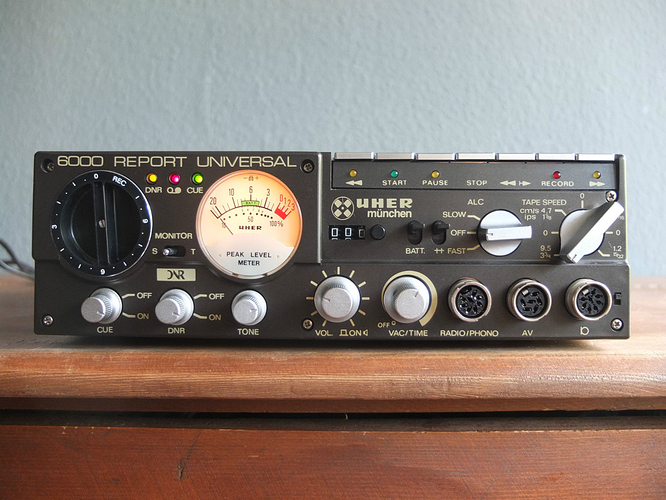 the deck itself is in excellent condition… but it has been difficult to setup (haven’t been able to find an english manual). with the help of google translate i’ve been getting through it slowly.

finally have the proper cabling and have it connected to my mixer and other gear.

i haven’t yet explored making any tape loops… interested in hearing how other have integrated tape into their workflow… and any interesting techniques you’ve established and like to share.

definitely interested. been thinking about using reel to reel for quite some time. especially curious about nagra 4.2.

A friend of mine has a music project/band that only uses reel to reel tapes as the composition tools.

There are those who howl with derision at the thought of anyone being hare-brained enough to set up a label specialising in obscure sound art in the midst of a massive recession. Then there are those who record such howlings onto old reel-to-reel...

they’ve just done a short tour of portland/SF but are mainly based in the UK.

here’s a short video of a soundcheck at a recent gig.

Yeah! Tape has been one of my main music tools since I was a kid.
My recent collaboration album w/ Taylor Deupree is all based on tape loops made at my place with my nagra

I’ve been doing performances with long tape loops that utilizes elements of the architecture of the space… Including a show with brian + Kelli at control voltage a few years back.
Like in this photo below… It was two long loops (about 35 feet each) that went from the bottom floor up to the atrium of the building being suspended by balloons. one loop was from a fostex 8 track and the other from a stereo teac. 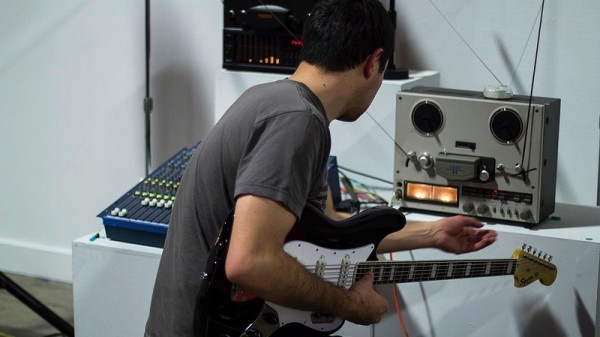 My number one tip is to try and cover the erase head sometimes when you are recording loops. It won’t result in an equal volume overdub but you can still get some cool results.

check out the open reel ensemble from Japan. Interesting use of long tape live.

Brings back memories … my first experiments were in the early 80’s in a studio with three Telefunken M5’s (mono, valves/tubes I think) and one M15 (stereo). Apart from this a small mixing desk which was used for oscillators (feedback) and we used long tapeloops via mic-stands and often through several recorders. I still have a fully working Telefunken M15A at home that I’ve tried to give away for free, but no takers, it is to heavy to move (over 50kg). It wants the tape wound oxide-out - I think this was how they were used in radio. I still sometimes mixdown to a Studer A810.

I’ve been experimenting on and off this past year or so with an old Tandberg Series 15 mono reel-to-reel tape recorder my wife found on the street when we were still living in London. I discovered an interesting technique that took advantage of one of the machine’s (many) quirks that I documented on my blog here: https://bitsnibblesbytes.wordpress.com/2015/04/15/acid-drag/

Can anyone recommend a good portable deck? I love the look of the Nagras and have started to do a bit of research, but would love to hear from folks with experience. Mainly looking to use it as a creative compositional/effect tool, rather than hi fi mastering or anything like that.

edit: I should also add– what are the most important things to watch out for when buying? what components are essential to have in good condition and what parts are more easily serviceable yourself or by a tech?

http://cargocollective.com/allymobbs/drum-phil
back at my mums house over christmas I found an old university project, thinking of trying some further mods,

nagras are amazing machines but very costly and although they are portable they are still quite heavy. i have a great inexpensive teac stereo reel to reel that i actually take out to shows more often than my nagra. it is a little larger but probably weighs less and is stereo rather than mono like most nagras.

the most important things you will want in a reel to reel are a strong working motor and record/play heads that are in good shape. things like belts + pinch rollers can be replaced easily.
i would encourage you to buy a machine in person rather than online so that you can test it out yourself.

@marcus_fischer: Is this you selling a Nagra in Berlin? If yes, why? And is your price fixed around 850€?

A thing I do often is run the same loop through two or more machines, all of them connected to the same mixer that also get fed with field recordings, synths or whatever I want to push into the loop. Then use a bus or send on the mixer to feed one of the deck’s input with the combined sounds from all these sources. This together with the covering or disabling of the erease head is maybe the most frequent thing I do with tape, also just letting different loops of slightly different lengths run simultaneously is something I use frequently.

nope. thats not me.
i live in Portland, Oregon

that is just too fresh 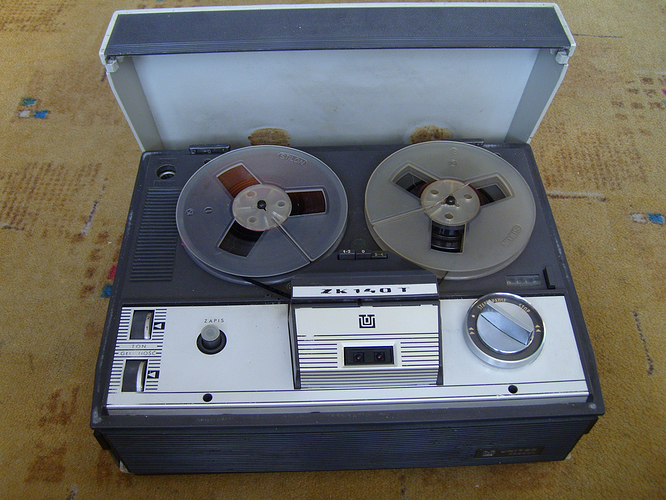 This deck was my first experience of experimenting with tape.
As a kid I discovered the amazing possibilities afforded by the three buttons in the very center of the device. The one of the left activated the playback of channel one, the one on the right, channel two. You could record program on each channel independently. And THEN, the button in the middle made it possible to play both channels at the same time!.. Amazing.

One silly thing i love to do is recording things double tempo at 30IPS and reproduce 'em back at 15IPS, get’s grainy and thick…
I used to work as an assistant for an engineer that was a pretty huge fan of Schaeffer and all the Concréte approaches, he always phased guitars using two Studers, and used to compose for his own projects using tape loop techniques. This track was completely done using different tape loops simultaneously he told me once: