RENICK BELL (Halcyon Veil/UIQ) [Tokyo]
Renick Bell is a computer musician, programmer, and teacher living in Tokyo, Japan. He is a graduate of the doctoral program at Tama Art University in Tokyo, Japan. His current research interests are live coding, improvisation, and algorithmic composition using open source software. He is the author of Conductive, a library for live coding in the Haskell programming language. Previously, he was a doctoral student at Tokyo Denki University. He has a masters degree in music technology from Indiana University and an interdisciplinary bachelors degree in electronic music, studio art, and philosophy from Texas Tech University. He has performed in many countries. He is from West Texas but has lived in Tokyo since 2006; he previously lived in New York City from 1999-2001 and Taipei, Taiwan from 2001-2006.
http://www.renickbell.net

KINDOHM (Conditional/Nada)
Kindohm is the music project moniker of Mike Hodnick, a computer programmer and sound artist. His current musical interests include additive digital sound synthesis and algorithmic sequencing and live improvisation using the TidalCycles live-coding environment. Hodnick strives to achieve alluringly minimal yet bruisingly complex arrangements through off-kilter code-based sequences that don’t quite repeat. He has performed internationally at events such as the International Conference on Live Coding (Leeds 2015, Hamilton 2016), Algomech (Sheffield 2016, 2017), and his music has been DJ’d live by artists such as Aphex Twin, Errorsmith, and Rian Treanor. He has released music on Minnesota’s Nada label and Berlin-based Conditional.
http://kindohm.com/

JESSE WHITNEY (Æther Tapes)
Jesse Whitney is an experimental composer working with synthesizers, embracing both digital and analog instruments. His work focuses on exploring the shifting nature of consciousness through sound. He lives in Minneapolis.

PAPERBARK (Seil Records)
Paperbark has been sculpting sounds for years using analog instruments. His studio has been a revolving door of vintage and modern synthesizers and samplers. You will rarely find him composing music in front of a computer. Instead, he prefers to interact with unique, hand built instruments that evoke moods that define his music. His views on politics, culture and life are felt in the textures he creates. 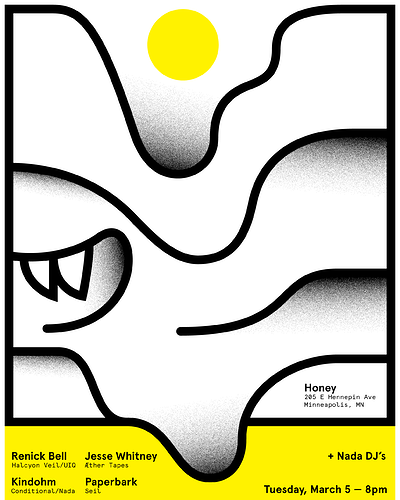 Great lineup, wish I could make it. Is this an ongoing series? I’m moving close-ish to the cities in April & curious to know about things like this.

Been checking out kindohm lately! Have fun!

Not an ongoing series, but we occasionally host electronic music/sound art events in the Twin Cities throughout the year.

Nada. 150 likes · 12 talking about this. Nada was established in 2011 as a medium for publishing and distributing subversive musics and sound works. Nada occasionally hosts electronic music events

That’s awesome to hear – I also just realized you guys put out that excellent Keroaän tape as well!

who did the design for this poster? I love it.