Any Renoise users here? I’ve been using the software for about six months on and off and am really enjoying it for the most part. A very different and cool workflow, and a very powerful tool available at a low cost on Linux systems.

Also curious if anyone has integrated a grid into the mix.

I’ve used the grid with it. Was a while ago. More detail here:

Hello, Does anyone have Duplex + 128 working in Renoise 3.0? I have the following working: serialosc Mark Eats Sequencer sum However, when I load up Duplex, I don’t get any feedback to/from the 128. I’m sure this is just a port/prefix/configuration problem. Any suggestions? I have tried setting the Out port to match the port number in the Bonjour browser, but this had no effect. [image]

Code has been taking the bulk of my time these days but I’m definitely a renoise fan.

I’m diving in right now and it’s my first time using scripts to effect audio. It seems like a very maximalist software and you can do so much so quickly.

Do you use Duplex in a significant way?

I’ve met many who praise renoise and never use duplex (understandably so based on the niche renoise so fittingly fills, but for me duplex seems like it could be a better bridge for those looking to have more sampling and performance in a tracker enviro.

No, not beyond the testing mentioned in the thread above. I agree that it seems to have untapped potential.

Another Renoise fan here. Using it for all my sample editing needs, but also with the grid, mainly as a sampler/plugin host with some external Python scripts to control it via OSC.

I’ve been intrigued by Renoise for sometime but I’m pretty much married to Ableton and I’m reluctant to use ReWire again. Redux looks interesting though. Anyone here using it? How does it compare to Renoise (no comparison sheet that I can find on their site)? I also assume that Renoise itself can still not be used as a plugin?

Are/have any of you used Renoise in a live situation? Renoise seems fairly static to me, in the sense that you play the track and that’s it. I’m trying to expand my thinking on this point. Definitly seems like there are some different ideas, moving loops around, playing some midi phrases on an input device…

I used it to play several gigs as audio and plugin host controlled by external (Python) scripts. You can indeed play notes & phrases, but also play sliced audio (mlr-style or not). Live pattern & song editing (duplex/gridpie) are possible too, but I never found a way to include them in my workflow.

Getting into Renoise again; I was wondering how you all deal with Renoise and hardware? Do you only sample into Renoise or orchestrate synths with midi out and record it outside of Renoise? And how about external effects? How do you deal with longer samples? So much questions hah

I used hardware synths controlled by midi from Renoise (with audio routed back to Renoise), it’s super straightforward. Make sure you record audio tracks next to your midi tracks anyway because anything can happen

Samples in renoise can be as long as the track, I never had any problems with those. I didn’t do anything special with longer samples either, but try slicing them - could be fun

Does anyone know how to change the midi channel that midi clock data comes out on linux? I looked under preferences>midi but I can’t seem to change it! I have some hardware that only listens for clock on channel 16.

This is strange. Midi clock data isn’t channel-specific. What kind of hardware is that?

Here’s the part in the manual about it: 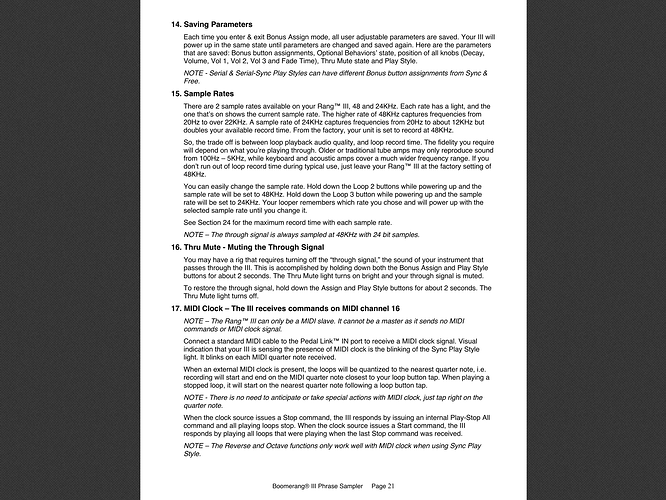 It doesn’t mention that midi clock should be sent to specific channel (which is impossible by design), so I’d just try enabling clock send in Renoise, it should work.

Exactly. Switch Latency option in the Line In effect to MIDI Return Mode to play your synths live, record with the sample recorder for storage/editing