Just got my Retrokits RK-008 today from the Netherlands. It’s inspired by the Alesis MMT8 but way smaller and in my opinion easier to use.

Thinking about this as the brain in a setup of small boxes is pretty exciting. I still have to dig into the manual but on first approach the basics are pretty easy to figure out. There is a bit of menu diving but pretty shallow and well spread out. 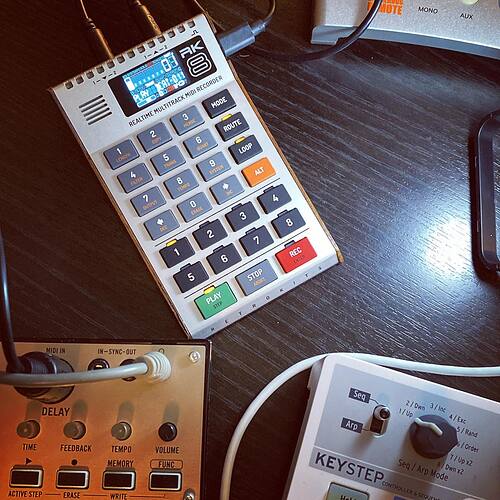 Wow. Congrats. This is on my shopping list for sure. Love my RK-006, and the 008 seems like a worthy purchase, for sure. I keep looking but I never see any pre orders open.

I forgot about this sequencer, it debuted like a year ago but I guess they just started selling it? It looks so awesome.

I have an rk006 coming and I am a big fan of the creative gear that retrokits is making. They truly understand Midi and the pain points we can have syncing/connecting gear. I am really intrigued by this sequencer. Please keep us posted on what gear you pair it with.

I think I’ll be getting the RK006 to use with it. The RK008 has 2 midi outs, so you need some kind of hub/splitter to use with a bunch of devices. I have an mio10 in my rack, but I’m looking at this as a solution to be mobile with a setup of small synths.

Can the device be used as a calculator?

not as far as I know

I got mine back in April, and I think it was the second round of preorders? In both cases they were very small runs, weren’t well advertised, and sold out extremely quickly. Not ideal to say the least.

I’d suggest reaching out to them on Instagram if you have an account - they’ve been very responsive and helpful, and I probably wouldn’t have snagged one if I had to rely on the email notifications.

So far I love using it, the only thing I would note that surprised me is that it doesn’t natively do MIDI over USB (i.e. it doesn’t appear as a MIDI device in a DAW). I’ve been using it with a Blokas Midihub for this reason, but the RK-006 would be even better as the 008 can address it as a separate output.

yes - I had trouble with the preorder email as well - but reached out to them over instagram. I believe these are going to move into regular production now with plastic side panels so hopefully more widely available.

Gotta get that RK-006! The ability to use the outputs as gate outputs to sync up modular gear is awesome!

Was tongue in cheek, bit of a geek

I have both the RK008 and the RK006 and I can atest to how useful a combo they are. Never tried the RK008 with the Midihub, since the RK006 is instantly recognized as additional outputs.

RK006 just landed - great companion for the RK008, and super easy to figure out. Amazing devices. I still have a lot to figure out about the RK008, but it is a lot of fun as a quick jamming tool.

It would appear that all the RK stuff works with CME wireless/bluetooth MIDI, so I guess I’m going all WIDI next

Has anyone used it with ableton? Just curious how accurate the clock sync is.

I like this, just watched True Cuckoo do his thing with it and it seems pretty capable.
The Alesis MMT-8 and a Korg Kms-30 were my hub back in the day, i am currently considering getting an Arturia Keystep pro which is about the same price as this RK-008, i get on with my keystep 37 pretty well and to have 4 arpeggiators with the pro would be awesome, if this Retrokit was a little cheaper and available now i think i would get one.

I also have the key step pro. The RK008 is considerably smaller, and can run 8 tracks of midi vs the 4 of the key step pro, but I don’t think of them as an either/or - both are useful in different ways.

Non-destructive Part Modifiers – Each part can be individually transposed, quantized, swinged, filtered or set to a different MIDI channel or even – to seperate RK-008 (or RK-006) outputs.

Whereas the keystep pro has randomisation/probability and other useful functionality, BUT it can’t record mod, bend or aftertouch or send program changes, yes it can chain 16 patterns but no song mode, i believe the Retrokit can do all that.

At the moment my sequencing duties are covered by my kits internal sequencers and a little black book, if i want to do a full production I’ll use Nuendo.

So as i already have a keystep 37 I’m thinking the Retrokit might be a better option.

I’ve got the 37 here, and a beatstep pro. I was very tempted by the Keystep Pro too, but for all the reasons listed in the last few posts, I went smaller instead.

The RK006 can play MIDI files from an SD card, so I was planning on utilising that, or recording/playback of multitrack MIDI (and audio) via an RPi and tiny screen, for mobile gigs/sessions with tiny, low power gear, negating the need for the bulky Keystep Pro. The RK008 kinda removes a big part of the hassle of getting everything in/out of the RPi, and means Im not just playing back an SD card MIDI but actually have on the fly options too.

As suggested earlier in the thread, I sent Retrokits an email, and managed to purchase an RK008. This was a mere few days ago, so maybe they have more?! Mine just shipped today

Worth sending em an email if you decide you want one