Does anyone have any favorite books or media related to ritual as it pertains to sound and music? Even sound healing stuff would be cool. I have been interested in ways of using modular + guitar to make a performance more minimal/ritualistic but still containing improvisation and I’m looking for some fresh takes on this.

I believe that any music with the right intention can be healing. Having some experience with spiritual healing and shamanic work best is to follow your heart and find / build your own rituals.

A book I love: Joachim-Ernst Berendt: The World Is Sound: Nada Brahma: Music and the Landscape of Consciousness (and other books by the same author).

“Ritual” is going to mean vastly different things depending on who you ask. “Ritual music” could mean anything from the occult-inspired stuff like Metgumbnerbone, Coil, and Halo Manash; the ecstatic drumming and glossolalic vocals of someone like Jon Mueller; most song and/or dance associated with spiritual / religious / ceremonial practices; or even things that would lazily be filed under “new age” or “world music” genre categories.

I haven’t read this yet, but it came up early on in a search for books related to ritual in sound and music: 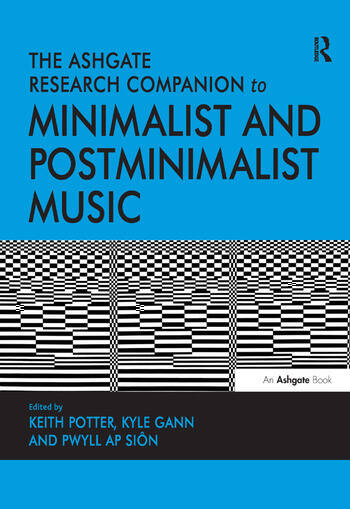 The Ashgate Research Companion to Minimalist and Postminimalist Music: 1st...

In recent years the music of minimalist composers such as La Monte Young, Terry Riley, Steve Reich and Philip Glass has, increasingly, become the subject of important musicological reflection, research and debate. Scholars have also been turning...

That’s how I would interpret it myself, for the most part. (There are also social rituals, like weddings, sporting events etc. with music but I’ll bypass that.) I’d categorize it into three main types, which can cross over:

– Music meant to enhance group bonding and participation in the context – like hymns and praise songs.

– Music that is itself an invocation.

– Music meant to set a mood but not distract, which can be performed by musicians “on autopilot” so they can spare attention to the proceedings. The original “ambient” music.

I was a Kemetic Orthodox (ancient Egyptian reconstructionist) priest for several years, and often acted as a drummer. Most of our songs were written for reason #1, though they could cross over to #2 when appropriate. A couple were specifically intended for #2 in specific circumstances. #3 was entirely improvisational but also quite simple – several people shaking sistra, either in a straight rhythm or making a gentle susurrus, and maybe one or two softly drumming.

Most, but not all, of our #1 songs were lyrical with no specific drum parts, so those got improvised. (One of those was in compound time, unbeknownst to the author of the song (!), gave many drummers difficulties and resisted my campaign to change the rhythm of the song to simplify it.) One of them was written with its drum part, and one was a drumming rhythm before the lyrical part was written. Non-percussion instrumental accompaniment was rare, but usually just improvised harmonizing.

We often had what we called “Gods’ Dances” which was informal, alternating between improvised drum circle stuff and type #1. Actual ritual was likely to start with #2 and then stay mainly at #3… and then trail off, emphasizing the silence in an intentional way or putting 100% focus on a part of the proceedings, and maybe go into #1 if the moment called for it. (Our rituals had very formal parts, and in some cases, left space for unscripted things to happen.)

I really love encountering music in a ritual setting.

One book that comes to mind is Music of the Spheres by Jamie James, which has a broad approach to music and cultural significances. From memory it doesn’t really address ritual but might open your mind to applications in that area.

A book I read recently about ritual in another fun context is Sacred and Herbal Healing Beers by Stephen Harrod Buhner, which has opened my atheist mind on how to understand notions of the sacred.

Here’s an ethnography on the ritual music of the Ewe people of West Africa. Might be interesting for you, if you don’t mind the dryish academic style of writing:

Ritual, mysticism etc. are matters that must be thought from themselves, that must be thought out of specific ways of comportment which enable the phenomena to show up, ways which are in turn constituted by the phenomena. This circle cannot be transcended by any proper investigation, any inquiry that purports to reveal something of the phenomenon. Revealing begins with what is most near, but thenceforth becomes a spiraling-out within this circle – never finishing, never getting anything clear, consistent, or complete as demanded by the universalizing approach. Indeed, our own work as musicians and artists, really only comes meaningfully into its own within this circle, within the spiraling process.

Had to read that several times as it’s so well expressed. You really hit the nail on the head!

you HAVE to read z’ev (rip) work: Rhythmajiik
a complete method for drumming based on the kabbalah and related concepts.

Thanks everyone for so many great insights! I’m getting a better idea of the direction I want to take the music and these perspectives and links (what I’ve gotten to check out thus far) have really helped. I know we’re all used to singing the praises of this forum, but the people here are officially the best, and the insight to post ratio here is off-the-charts amazing!

@hyena Any way to get/read Rhythmajiik? That sounds super interesting.

when z’ev was alive he asked anyone interested in reading it to contact him and request it directly to him. he then provided a free download. i found this way of keeping a first hand contact with his readers a very important choice. this led to my conversation (by email) with him that gave me a lot of interesting insights on his views and a lot of interesting suggestions on how to translate those guidelines, that method, to electronic music production and performance.
now that he left this plane i think it’s safe to affirm that there’s no problem in sharing it. in fact i just found out there is an archive.org free d\l:
https://archive.org/details/Rhythmajik

This is where I’m at with the music right now. These are two short Instagram vids showing my approach with the ritual music. The idea right now is to to have the modular playing random notes quantized to a scale, and on top of that, I’m playing a constant stream of notes, improvising around the scale, but trying to keep the pulse constant.

The balance of sound isn’t there yet—these are just iphone recordings, but I’m excited by the possibilities. I’m booking a show locally this Fall in my home of Richmond, VA----this will definitely force me to figure it out/be able to perform it for people.

Candomblé (Portuguese pronunciation: [kɐ̃dõmˈblɛ], "dance in honour of the gods") is an Afro-Brazilian religious tradition, practiced mainly in Brazil by the povo de santo ("people of saint"). Candomblé originated in Salvador, Bahia at the beginning of the 19th century, when the first temple was founded. Candomblé is practiced primarily in Brazil, and is also practiced in other Latin American countries, including Argentina, Uruguay, Paraguay, and Venezuela, having as many as two million follow Ca...

Divine Horsemen: The Living Gods of Haiti (1985) is a black-and-white documentary film of approximately 52 minutes. It is about dance and possession in Haitian vodou that was shot by experimental filmmaker Maya Deren between 1947 and 1954. In 1981, twenty years after Deren's death, the film was completed by Deren's third husband Teiji Ito (1935-1982) and his wife Cherel Winett Ito (1947-1999). Most of the film consists of images of dancing and bodies in motion during rituals in Rada and Petro se...


Voices of Haiti by Maya Deren

this film does contain footage of animals being sacrificed and it is definately not my intent to offend anyone with this post.

there is also a book which i have not read:

Includes photographs and drawings. Foreword by Joseph Campbell This is the classic, intimate study, movingly written with the special ins...

this is classic and I don’t think listed above (?

Now in its second edition, "Sound and Sentiment" is an ethnographic study of sound as a cultural system--that is, a system of symbols--am...

I’ve read the book, though it’s been a while. It was actually recommended to me by a friend who’s a mambo, as being surprisingly not terrible

i’ve read the book, though it’s been a while. It was actually recommended to me by a friend who’s a mambo, as being surprisingly not terrible

that’s because maya deren got sincerely involved with voudou in haiti. she went there to simply study traditional dances and music, by a westerner point of view, by an artist and researcher point of view. then she was ridden by Erzulié and her life changed for ever.

Well I did my first solo performance using a lot of what I learned here, and it went great! I played in a small room in the middle of a local park, and the night and the vibe was perfect. The project is called ‘Ritual Magick’ and it’s definitely something I want to do a lot more. Thanks for all the info and keep it coming. Here’s a pic a friend took of the scene: 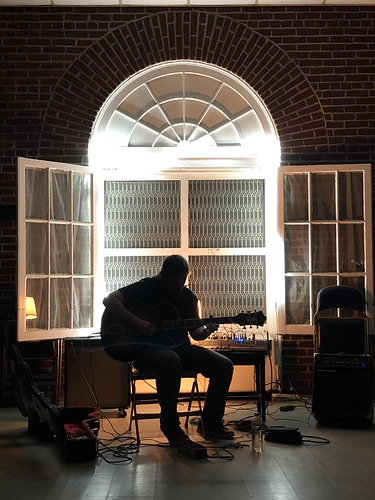 IMG_2333.jpeg3024×4032 2.13 MB
The main piece I played revolved around a constant stream of guitar notes that were all evenly spaced. I had the guitar sending gates that would trigger the other sounds, so as I gradually increased the speed of the guitar, everything else did too and it gave the music a gamelan feel.
5 Likes
youaresound September 25, 2018, 10:41pm #22

its funny, just saw this thread as im working on some ritual music right now!
worked on this a year or so ago

and now we are making a new one…
my good friend lucien is a sculptor and performance artist.