This script is a little util that allows to record a sound an play it back at various RPM ratios.

The main use is to replay the sample sped up into a hardware sampler to save memory and add some punch to samples (demonstration of the effect).

It comes with its own fork of the timber engine with some tweaks, so a sleep is necessary.

Samplers, sampling, suggestions for a sample based workflow Equipment

Currently this is a typical process for me: Record stuff -> put it in Ableton/simpler to edit, mangle -> do a a few takes with the Push2 while running the sound through my eyrorack and pedals. Is there a way to do these things inside the eurorack domain? What kind of sampler module could be good? Thanks!

I searched the forum months ago before purchasing and while trying to troubleshoot some issues but…didn’t find as much as I hoped for (at least not in one searchable location). It’s quite amazing how often MPCs are discussed here in other threads w/o existence of one like this. So here it is! I hope it will be a place to discuss our shared interest in the legendary sampler series. I expect some of you might wanna share your history with the machines, why you love em, and how you’re currently u…

No release for now, not yet on maiden. 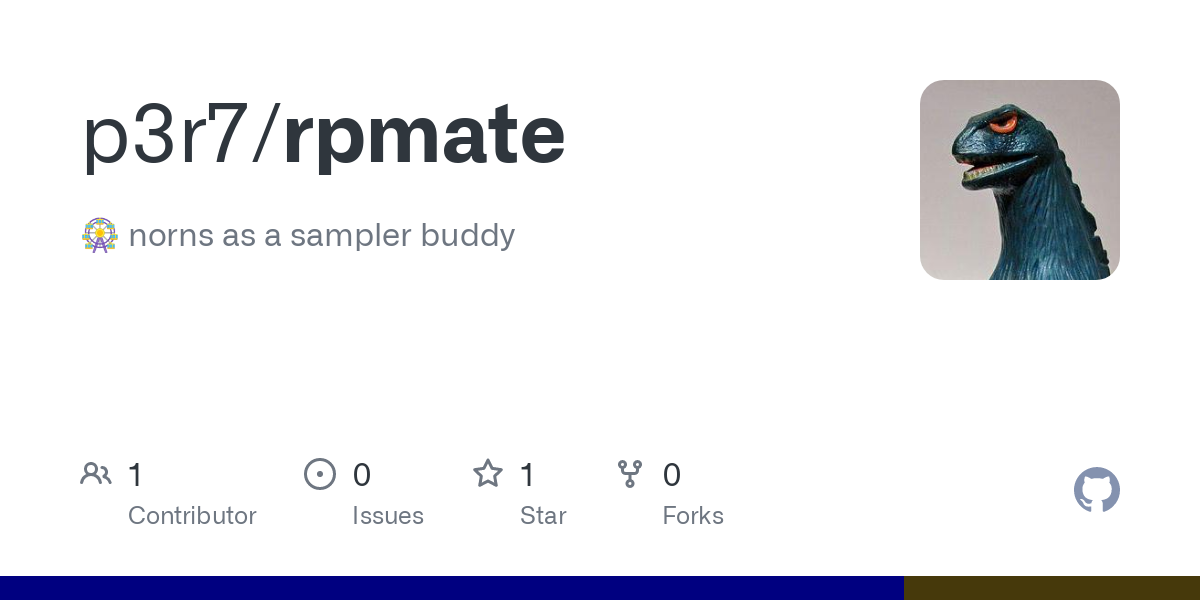 🎡 norns as a sampler buddy. Contribute to p3r7/rpmate development by creating an account on GitHub.

I know its not your priority but a simple slice and save option with clever/fast naming would be great!
Cool stuff btw !

I thought about it, even though it’s not the primary purpose of the script (where a hardware sampler would do this duty).

In the meantime, although minimalist, sam might suit your needs.

Hey there. I’ve been wanting to try this out and just got around to it. After restart getting an error: load fail.

Need to load this up and see if I’m experiencing the same thing. Really looking forward to trying this!

The issue seems to be that you cloned the repo as a rpmate-main folder instead of the expected rpmate.

Renaming the folder should fix the issue.

The reason why it fails is that I include the lib with path rpmate/lib/*. I later discovered that lib/* would also work, making the code agnostic to the folder name. I will update the code accordingly.

Wow! Looking forward to using this with my SP1200 & Mirage samplers

That worked! Thank you!

I finally got access back to my MPC 2k XL and was able to test.

It works surprisingly well, even with a youtube video recorded at regular speed and then sped up w/ RPMate.

I tried in the past by feeding sped up youtube video to the MPC and the result was pretty garbage (lots of artifacts).

Also, I managed to steal the 3 band EQ from pedalboard. Its buried deep in the params menu, I need to create an UI page for more direct control.

Wow! Looking forward to using this with my SP1200 & Mirage samplers

Don’t know about the Ensoniq, but it’s a beast of a machine (early Alchemist sound, IIRC).

could not recall the name of this at first but am glad to dig it up again…what crazy, wonderful idea and ui!