I’m really excited to share the second release on my new micro-press/label <blink>, “A Sea of Cogs”

This project has been in the works since summer 2021 when @tvo / @ruaridhTVO and I started talking about the music/audio he had made for a video series (more about the original video pieces: Ruaridh Law Art & Music). I was just in the beginning stages of imagining this new imprint and the combination of artwork, sound, and text is exactly the kind of thing I was thinking about.

Over the next few months we worked together on a concept that combined an album edit of the audio from Ruaridh’s video pieces and a conceptual poetry book using text from the video interview transcripts as raw material.

The end result is a 30 page risograph poetry book that accompany’s @tvo / @ruaridhTVO’s new album. To create the poems I edited the interview transcripts, trying to hone in on core ideas, themes, and language. Each spread of facing pages includes text on one side, and the transcribed background sounds on the other.

The album is an edited track for each of the original videos, named for the people that Ruaridh interviewed during the project.

The book is a limited print edition of 50 copies, and is also included as a PDF with digital purchases.

This is the second official release for <blink>, which will focus on this sort of combination release of text, sound, and artist multiples. I’ll likely do only two or three releases each year, based more on finding the right kinds of projects rather than trying to hit a number.

I hope you find it interesting, and please feel free to ask any questions.

You can read more and listen to the music here: A Sea of Cogs | Ruaridh Law | <blink>

This was an absolute pleasure to work on…really excited to see what else @emenel / have lined up and eagerly awaiting the arrival of the book!

Also, what a weird way to realise that I had a different alias on here at one point that I didnteven remember setting up

Lol! wow, I totally got the username wrong. 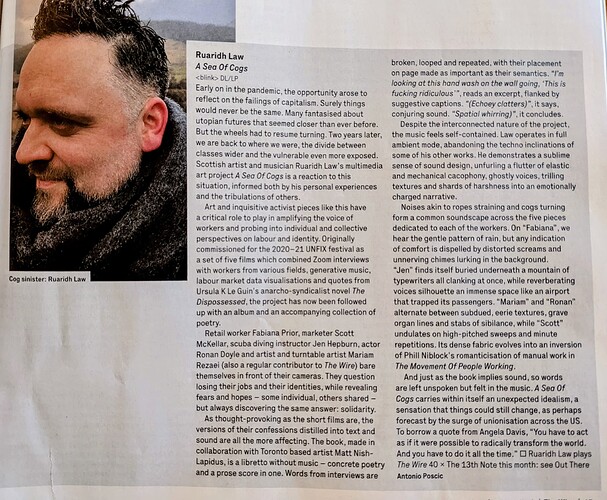