I haven’t seen more than a couple of references on Lines to this powerful and versatile module. With that in mind, and having recieved one in the post a couple of days ago, I thought it was worth giving it a thread and sharing a few thoughts. 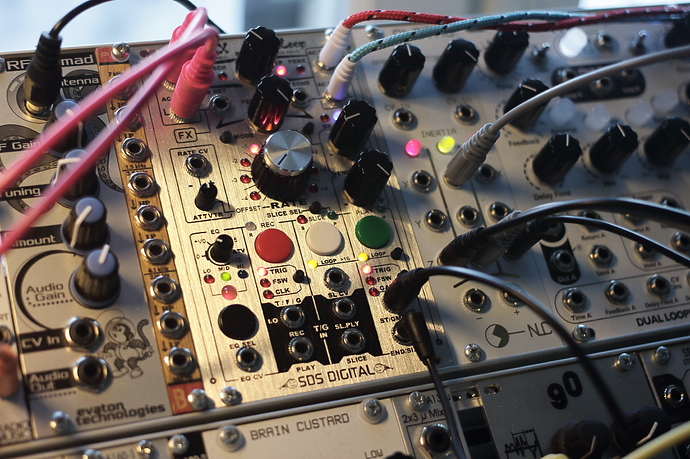 RLL is designed and built by Sandrine Sims aka Fresh Nelly. Check the official product page for her own full summary of what it is, is not, and what it can and cannot do: http://www.freshnelly.com/reflex/reflexhtml.htm

I bought it in my search for a replacement for Phonogene. I mean I was looking for a sampler-mangler with more intuitive controls; obviously Phonogene is cool, but I never really got much out of it that I felt justified the HP. I couldn’t afford a Morphagene, and everyone else has one anyway. For reference, this is $180 cheaper than a new Morpha. It’s also stereo, which was what persuaded me to try it over a Ginko Synthese Sampleslicer.

The way it can record incoming audio into sliced samples seems quite similar to a Sampleslicer. It can also function as a looper, an echo and a granular scrubber/mangler. It has a hidden ‘phonogene mode’ but I haven’t tried it yet. At the highest sample rate, it can record over two minutes of audio; the buffer gets very long with reduced sample rates. Impressively, it has its own three-band EQ with somewhat user-definable Hz ranges. An incoming clock will also open up a lot of possibilities. It’s basically nuts.

Here’s a scrappy demo I just made containing a few excerpts of hasty jams. NB: I’ve been drinking IPA and I still don’t really know so much what I’m doing with this module. All audio comes from samples played into the module, apart from the final excerpt. In that one, it’s a sample first dealt with by g0 and then fed into RLL.

I am a little disappointed by how crackly/poppy the grains/slices are. This will put some people off and is definitely an acquired taste these days - the effect is a bit like a damaged CD. I gather Sandrine is continually improving the firmware; perhaps there’ll be envelopes on the grains later or something. In any case, now that I have the module and must get to grips with it, I’m learning to like this jerky sound (very Mille Plateaux!) and the best ways to integrate it with the other modules & textures in the rack.

Thanks for mentioning this device. I had been tracking it for awhile, and wonder occasionally what people are making of (and with) it.

So many more options and features - the manual is like a tome! It’s. It’s very like w// actually - muscle memory and cheat codes

Check her RITM, VCO (which is also a drum module, cv recorder) and all super reasonable and she’s an awesome dev - big fan

Thanks for elaborating! Clearly I’ve got way more to learn in the 60-odd page manual - I’ve not even begun to explore sample slicing yet. Pretty much just R/P mode with g-move so far. I have a feeling this one will never be left out of patches!

I just emailed Sandy about getting one myself - planning on using it for live work with guitar, for regular looping and for more extreme stuff!

Since making that initial post, I’ve really come to enjoy the RLL as much when it crackles as when it doesn’t! It was the centre of a pair of little gigs I just did, mixing dry samples going through it with wet mangled looped versions. I really felt I wasn’t making the most use of it - I still haven’t attempted anything with slices yet - but I was pleased with the results. It’s so brilliantly versatile.

I’ve also been looking at this for some time. The things that have kept me from getting one are mostly just the way the panel looks and the fact that it does indeed seem rather complex (the very fact that the manual is so huge does put me off a little bit). Ok, I’ll be honest, the main reason I didn’t consider this is mostly because I’m not really buying new gear atm.
This said I’m keeping an eye on it, since it still makes more sense to me than the Morphagene, or even the w/ (sorry, I know a lot of people are in love with that one), so thanks for bringing this up!

I’m still a little torn between a midi syncable loop pedal like a ditto x4 as it’s the looping stuff that appeals more than the choppy stuff, the loop is cheaper and as I use guitar a lot too it’s more hands free, I’m just worried I’ll miss the speed and fx modulation, which is why I like the liveloop.

Sorry to have taken a while to respond. I’ve been too busy to get on this forum much, even for my usual lurker habits.

I can certainly imagine it being a little difficult to use to record initially when you have both hands on a guitar. I’m not sure I could suggest anything you’ve not already considered, but If you have any cheap/easy way of sending a CV signal from a pedal or otherwise with your feet / a free limb (could perhaps even be an open cable that you fix somewhere and tap with a bare toe!) then you’re good to go, for there’s a CV in for REC. The midi board expansion would also trivialise this issue, but that’s adding yet more to the price.

I’d also like to check back and say that I’ve done a couple of little gigs with the RLL at the centre of the eurorack patches, as well as played around with it for a while on most evenings. I’m really in love with the sounds it produces now. I have to say, though it’s powerful and very versatile, with each section having two or more modes and each mode interacting with the others in different ways, the controls tend to be quite simple - each of the playFX modes, for instance, has only two controls after all. Messing with a loop that retains its timing and pitch is immensely satisfying.

One of the most important albums of my early twenties and to this day is Breizhiselad by Éric Cordier - https://www.discogs.com/Éric-Cordier-Breizhiselad/release/750613. Listening to choral music manipulated in complex ways is so satisfying and absorbing to me and I’ve used choral textures in various ways in almost everything I’ve made since. Now I’m finding that running some choir samples into RLL patched into DLD can produce a vaguely similar kind of sound to that album. Very exciting!

I friggin love this module. First eurorack module I acquired, actually. I’ve had it for 6 months now and I still learn new stuff every week. It’s just absolutely bonkers, and Sandrine is the closest thing to a mad scientist I’ve encountered in the real world. Everything she designs feels like it’s exploding, and I mean that in the best way possible ahaha.

Im really intrigued with her ideas.

Does anyone use chained RIT_M. They look really “handy” for drums.

I was just thinking about picking up a couple of RITM’s - 120 each (i think) - again theres just so much there. I cant wait actually…thats after Norns, ect

Also quite interested in this one for some time now.
Like papernoise, always put off by complexity and graphics.
Could do an alternative panel ofc but given all the stuff on there a rather hard job.

So i wonder, as the company name suggests, does it sound rather digital or can it do the tapey pitch things in echo/phonogene modes?

Or basically…i do like the simplistic tape inspired loop manipulation of PG, been a while but i think i did like the sound too if a bit lofi. What i am wondering can the RLL do mostly all the PG does?

I am between this, a now pretty inexpensive PG or W/

It will do most of what the Phonogene does, as well as a lot more. The controls are more complex on the RLL. The pitch shifting does sound quite digital–especially when pushed to the extreme. I have not played with a Phonogene or Morphagene myself, but from what I’ve heard they are a bit cleaner and smoother sounding when doing granular stuff or pitch shifting.

Just checking in again to report that I still find this module exceptionally useful and fun. The EQ control is so helpful when sampling external audio, and the fact you can control it with CV is cheeky. I STILL haven’t delved into slices yet, but will start giving it a go now that I have some sequencing modules set up.

It’s in my rack to stay: I’ve just invested in the flash-8 expansion board, allowing permanent storage of up to eight sessions and meticulous MIDI control.

i am interested in the MIDI expansion. i have been using the SDS since it came out and i just added the eventide DDL and a bitbox so i am kinding shifting focus and enjoying the thoroughness depth that Sandrine put in her work

MIDI expander is way cool. This was the first module I got so for a while I was just controlling it via MIDI from a Digitakt. You can do a lot more with it that way than with CV, and you even get enough control over the right and left channels separately that you can kind of use it as a dual mono sampler. Save slots are great, too. This week I’ve started making a bank of synth voice scales and a bank of filtered/effected noise. At the full sample rate you can have 3 minutes of content per slot which gives you a lot of room to work with.

Hello there. I’ve been agonizing over this module vs a Morphagene or a Nebulae V2 for months now. The fact that the jacks in the black section at the bottom can be configured to work with foot switches was always a plus. However, I always wondered how easy it would be to use this module in place of a simple guitar pedal style loop pedal. It seems like it would “just work”. Have any of you tried it that way?

It seems like it would “just work”. Have any of you tried it that way?

This is part of the core functionality of the module and, particularly in loop mode, it can do it very easily. Still, having the record and play controls as buttons on the module means that if you plan to have a guitar in your hands at the same time, you’ll need something like a footswitch patched into the REC trigger input.

you could use a floor module too i assume