Segmod - "a non-standard sound synthesis that embraces the discrete nature of digital sound."

This is absolutely wonderful. Endless gratitude!

This reminds me of how SID Wizard for the C64 handles ‘instrument tables’ by allowing you to switch between waveforms inside an instrument!

If I recall correctly one of the things that gave SID chip its distinctive sounds is that the fastest that any updates could happen (changing waveform, filter frequency etc.) was at TV refresh rate (so 50Hz for PAL region).

UI is online and waveforms now also work, next up wave-dsl (so the two bottom left text areas part aren’t working yet)

Oh and you can drag and drop different themes on using @neauoire’s theming system.

I checked it again and I see that you already implemented sharing patches, that’s really cool!
I won’t comment on internals because I see that you are still working on it, but on UI side there is this weird thing that on safari the row with frequency, controls and scope has a height of 0. Setting flex-basis to auto for row class style fixes this.
And while we are on topic maybe someone could shed some light why following behaviour was implemented in css:
default values for flex are 0 1 auto but if you set it to single value like flex: 1 then the two latter values become 1 0 so effectively when you type flex: 1 you define flex: 1 1 0. That is totally not what I would expect. I would expect the values that were not defined to default to default values which seems to not be the case with flex-basis.

Hi, thanks for porting this, looks awesome!

Does this iteration produce sound or is it just a UI concept?
Can’t get any audio playback or download functionality to work. 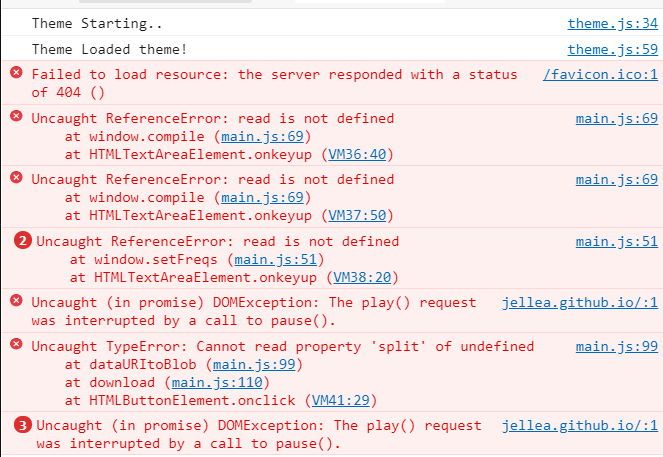 It should work, but the defaults are a bit broken at the moment.

Here’s a link which should work, just add a space to the waveforms formula (left text field) and hit play.

edit: Screenshot didn’t load before, it seems like something else is going wrong. What browser/os are you using?

Would it be possible to add a random seed parameter to wave-dsl? That way I can make the share links for determinate? I’m hashing the wave-dsl strings now, but they get different random values applied; I think it may be nicer to have idempotent links

Managed to get it working… sometimes. Sorry, I know it’s not the most helpful answer!

Let me know if there’s anything you want me to test/do from my end.

Sure, I think it should be doable so I will try to add it in the evening. Maybe I will also improve a parser a little.

mac seg faults when i run it from terminal

I also had this problem (on Arch Linux) and it turned out that I used some wrong command line arguments. So be sure to double check those, maybe then you’ll get it up and running!

yeah, just running it results in seg fault, you need to pass at least one input file. You could try running example with using sine as a wave by calling:

EDIT: @lijnenspel I added possibility to pass seed as an second argument to parse so the links should give repeatable results now (already pushed it to GH). I used some PRNG lifted from stack overflow which might not be ideal but at least it shouldn’t block you with your work. Also it should be possible now to enter comments with spaces in them.

Thanks for all the reports! Did some work on stabilizing the web UI yesterday, so please let me know if there are things which feel buggy

Some other things I’ve added:

I really like what you have done already!
But as you are asking for suggestions:

the AudioContext wasn’t able to resume. but it looks gorgeous.