They’re about to launch a new version of this kit based on updated boards and smd components, it will be much easier to build than the old one.

It’s also not super clear how you go about building with the larger panels. Do you have to seek out each individual pcb behind the panel on your own?

The panel kits come with all the pcb’s for the entire build. The build guides on the R*S website were good enough to get me through it with a little help from Ralf, who is great at responding to email with assistance. I used a spreadsheet to put together a Mouser order for the components for a whole panel at a time.

Also happy to help out with DIY in this thread…

hot take: the serge DUSG & VCFS make a better 303 than the 303. a few demonstrations from my IG(please follow me!)

I bet i could get even funkier results with the DUSG as an EG instead of the Contour. I really can’t say enough about the magic of the DUSG and slope generators in general. I’m still trying to understand the differences between Maths and the DUSG in regards to their triggering behavior and general envelope shapes. Maths acts like a fairly standard EG but the DUSG’s Rise and Fall controls act much differently. the shortest envelope times seem to be with the knobs at 12:00, whereas on maths the shortest EG times are on fully CCW. then on the DUSG, turning the rise/fall knobs CCW from noon slows their attack but also shifts the timing of the triggering of the envelope. it’s quite weird, but sounds AMAZING in practice. Anyone have an explanation for this behavior?

I can’t wait to sequence the serge oscillators with the new Rene 2. I have never pre-ordered a module within 8 hours of the full announcement. It’s the first module that i have been genuinely excited about in a long time.

the thing about maths is that it has that shape knob. serge general slope is linear at heart by design. so the maths is linear too, but it has feedback built into that shape control. i actually have this internally patched on my modcan bastard version too. take the output and feed it to bipolar cv input. negative goes log and positive goes exp. pretty fun and will i think account for the difference shape you mention!

It’s been about 15 years since i’ve used a soldering iron. How difficult are the R*S builds? Seems like the best entry to 4u.

Essentially a standalone mono and it’s plenty to start with. Serge functions are amorphous, and it has a steep learning curve. The La Bestia is pretty much the RS version of the Animal, both I’d say are very rad and fine as standalone synths. The only downside of both (imo) is that you don’t get a “full” DUSG. I also think the self cycling left side of the DTG on the RS design is infuriating but ymmv.

I’ve never used Serge but getting some time on one at EMS in Stockholm next April. Wondering if I should dip my toe in before then or go in ‘blind’, as it were. Don’t have the cash for a 4u system (yet), but the Euro stuff is tempting since Thonk have full kits in from time to time.

t’s also a bit of a gateway

The only downside of both (imo) is that you don’t get a “full” DUSG.

So La Bestia is basically a Serge 0-Coast lol. Thanks!

I also think the self cycling left side of the DTG on the R S design is infuriating but ymmv.

What don’t you like about the self-cycling side? I assume you’re talking about the mini-DSG on the La Bestia and Carnivore module…

I’ve used mine to good effect… but I’m also glad I have more full size DUSGs in my system.

I wouldn’t say that exactly, I think a La Bestia or Animal would provide a completely different workflow and sonically I don’t think they have too much in common.

Indeed, the Carnivore is what I’m talking about. I don’t like that it’s patched to permanently cycle simply because it doesn’t have to. If I wanted it to, I could use one shorting bar to get it to do that. I’d rather have two standard DTGs instead of just one, and one that has implications of it functioning as an oscillator (which in my experience is difficult to tune, even though it’s possbile). The cycle toggle switch also seems unnecessary, even if convenient, because I could use a patch cable to do the same thing. I feel like the DTG (and this where the ymmv kicks in) is already a compromise between an oscillator and a full DUSG. Not saying you can’t do cool stuff with them, but the DUSG is super powerful comparatively. I understand they are similar but also very different. I think Ralf has an incredible understanding of what a DUSG could be (as evidenced by the incredible new XL module) which is what leaves me scratching my head as to why you’d hardwire a DTG to self cycle.

Does anyone know of sellers in the US who are building the R*S serge panels?

I was just kidding based on the quotes I pulled

Thanks for the advice though

I know someone near Toronto in Canada that does builds for people. Happy to give you the info if you’re interested.

The other place I know of that sells fully build panels is Patch Point in Berlin.

Yes please that’d be great! And yes I keep seeing Patch Point come up as the go-to, just curious as to if it could work out cheaper locally

its sounds like the 4u DSUG XL version is more innovative than the original or 3u version. Maybe I should grab a 4u system someday in the future! But how is the PSU? because I heard that the PSU is not as flexible as eurorack?

I think the DUSG XL is a big a step forward as any STS - can’t wait to get one (though my bank account probably could!) PSU is big and clunky. Not sure about 4U power solutions w/r/t portability, doesn’t bother me so much as it doesn’t leave the house.

Hadn’t seen it mentioned in here, but anyone thinking Serge/4u should also consider Loudest Warning - does wicked things in panels and as individual modules. My own small Serge below, patched for playing at Fort Process weekend just gone. In paperface style, one panel is. ‘Superanimal’ (inc 258s instead of PCOs) and a Vintage Voltron 3+, including bonus divider and quantisers. Lovely little system: 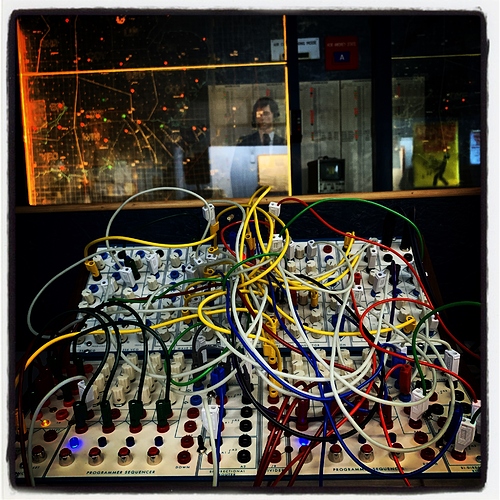 57 Likes, 7 Comments - Grant Wilkinson (@muncky) on Instagram: “I see a lot of wiring in my future... thanks again to @loudestwarning for the design,…”

Nice! I was looking at that panel on his Tumblr the other day

Not sure what you mean by flexible. There are a few options - there are large supplies that can run multiple boats and there are small supplies that are mounted in the boat or case.

Random*Source offers both options. The in boat supplies are basically the same as eurorack power.