Been having some stability issues with serialosc. I frequently see 2 or 3 instances of serialoscd running in Activity Monitor. This morning I woke to my MBP fan wooshing loudly. Checked the console and found:

Here’s that crash report. There are a total of 11 crash reports for serialoscd stretching back to the beginning of November. 4 of them are divide by zero errors like this one:
serialoscd_2015-11-29-072636_Jasons-MacBook-Pro.crash (10.8 KB)

There doesn’t appear to be any way to determine which version of serialosc I’m running? I’ll also mention that I wasn’t using the monome at the time of this most recent crash.

Please let me know if there’s anything I can do to help further debug. I’m greatly interesting in developing a more thorough understanding of the inner workings of serialosc.

I was having lot’s of crashes going on running osc 1.4
I installed 1.2 right over it and haven’t had any crashes since.

@jasonw22 was this 1.4 crashing? what other hardware was plugged in?

Here’s what the system profiler has to say about my USB environment.
usb.rtf (54.4 KB)

That list makes it look complicated, but it’s just the internal keyboard/trackpad, the internal bluetooth host, and the two internal USB hubs, to which are attached a monitor which has an internal hub and media reader. Attached to the monitor is a KVM switch which has a mouse and keyboard attached. There is also a new Anker USB hub attached directly to the Macbook. This has the Monome, Scarlett 18i8 attached. Finally, my silly large Manhattan hub is also attached to the Anker hub, but since I’m only using that to charge things at the moment, I’ll remove that to simplify things.

Here’s what it looks like with the Manhattan hub removed:
usb_v2.rtf (12.8 KB)

How do I determine the version number for serialosc? It was installed with monome_sum, but all I can find about that is “2014”.

I’m assuming it makes sense to download and install serialosc 1.4? Do I need to uninstall 1.2 first?

Edit: just noticed that the serialosc 1.3 release date makes it a candidate for what I already have installed as well. Which version was included with the monome 1.1 installer? That Github repository doesn’t appear to have any files in it, so I can’t verify for myself.

I learned that a restart is required before the new version will start.

I also learned that while serialosc 1.2 just has three indistinguishable serialoscd processes visible in activity monitor, 1.4 shows serialoscd, serialosc-devic, and serialosc-detector. So that’s one way to tell the difference.

Feature request for version 1.5: a version flag that would be visible in crash reports and from the command line.

How do I determine the version number for serialosc?

@jasonw22: did you ever figure out how to do this?

If we’re talking about a Mac, searching for serialosc in Activity Monitor should look like the image in this post:

Unfortunately the version flag is not set. In other words, I believe there is no way to tell. Fortunately the installer for the latest version uninstalls any previous versions. Edit: another difference between 1.2 and 1.4 is the way it looks in Activity Monitor. 1.4 looks like this: [image]

Anyway (and aside), since this comes up somewhat often maybe another community effort could be maintenance of an FAQ for serialosc. For example, I noticed that there’s a stale link on the OSC docs and filed a bug but I’m not sure where that source lives or I’d just submit a PR!

@jasonw22: while I have you… Is there any way to manually start serialosc? IOW, I killed it via the activity monitor but would like to start it again without a full restart.

In an old thread, I found this advice from @tehn:

but it doesn’t work for me. (Perhaps it’s out of date? That thread is old!)

Also, interestingly, I don’t see serialoscd in /usr/local/bin. Anyone know where the installer puts it? (Yes, Mac.)

If you haven’t installed serialosc v1.4 yet, I recommend going ahead and doing it.

Thanks! I did. Now I’m just trying to kick it off / verify that it installed. Any way short of a restart? Where does it live on your system? 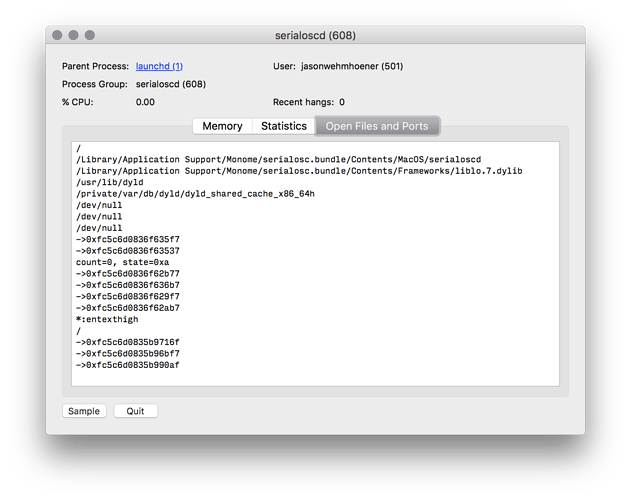 After a restart, I appear to be golden.

(and my process details look similar to yours.)

Aside: I opened an issue to track the idea of a serialosc FAQ on the serialosc repo (#25). I wonder though if this wouldn’t be better hosted more centrally and encourage community input. Maybe a new repo in monome-community to host user maintained docs?