Anyone knows more about this box?

Wish there was more IO but certainly looks intriguing!

So the idea here is that it transcompiles max patches into some sort of native language that runs on the hardware? Seems… very fiddly without buy in from Cycling. Would be awesome if it all worked though.

From what I gather it converts Max patches to an HDL suitable for running on an FPGA. If they’ve really got that running it’s pretty damn cool. Looks very proprietary though.

I would definitely want English documentation and details about Cycling74 involvement, but if those things came to light, I’d be pretty intrigued.

Here is the Google translatation of the How to Use section:

※ sigboost is under development, will be able to if you use a function of conversion, will be the only person in the part of the test user. If we wish to support us, and, if you are interested in this project, please contact support @ sigboost.audio or Twitter @sigboost.

Looks like a really interesting research project, but sadly like everything to do with FPGAs, far too closed.

Here’s a picture of the board: 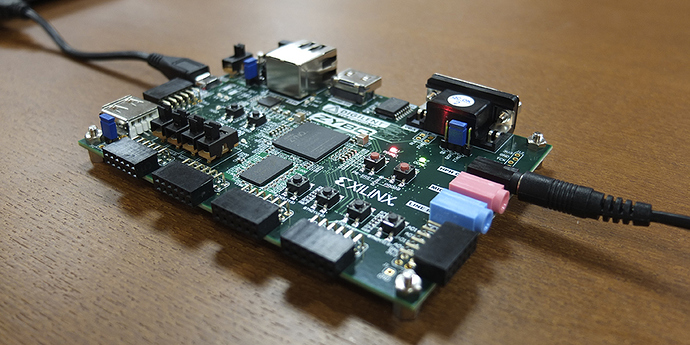 So you write stuff on your computer, then transfer it to this computer to play it? Is that right? I don’t really see the point tbh.

It’s an FPGA rather than a general purpose computer.

An FPGA is a programmable circuit board (only for digital logic in this case), where as a computer is running a program executing a series of instructions.

Alternatively, an FPGA is not a computer running a program, it is the program made into a circuit board.

Anyway, if they’ve done it properly it will be stinkingly fast, and with virtually no latency. Big if though.

as I understand it this would be more akin to something like an aleph, or teletype, or w/e, than a general purpose computer.

They’re all just computers under the hood, but dedicated devices go far to feel a lot more like an instrument.

aleph and TT are in-box realtime scriptable/mappable. this looks like an target platform for static programs. FPGA is definitely interesting.

i’m pretty sure cycling74 has no direct involvement in this-- i mean, they also cite microsoft.com. the general presentation of this project sets off all sorts of vaporware alarms.

My money is on this being the byproduct of someone’s PhD thesis.

I’ve seen a few of these alternative to VHDL/Verilog things crop up over the years, and they usually come from academia. Sadly due to the overly closed off nature of FPGAs they never take off. (Plus academics only seem to care about publishing papers…)