Grid-based sequencer take on the M185 sequencer by RYK modular/Intellijel Metropolis, also inspired by the m18s script by @jlmitch5.

Place the grid vertically, with the USB port on top. Change pages with E1. 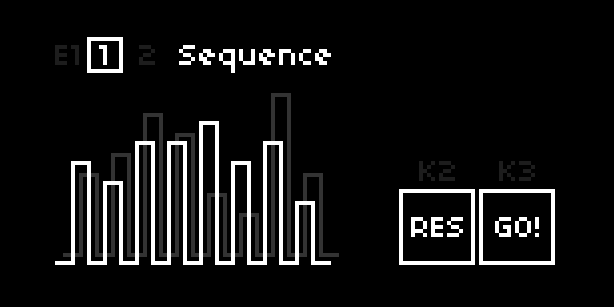 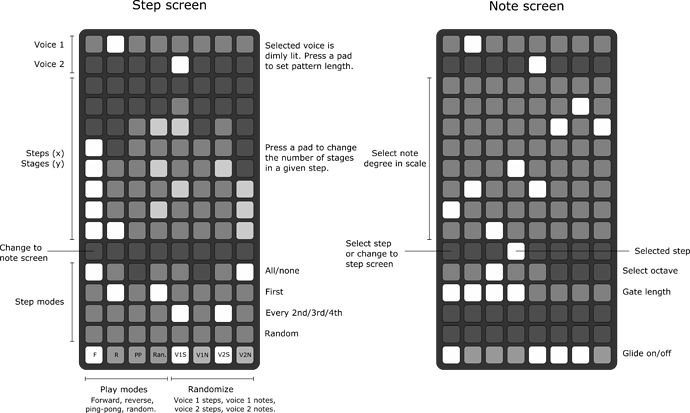 The top block of lit LEDs represents memory slots for presets, which store all the information of a patch (except for the internal clock tempo). 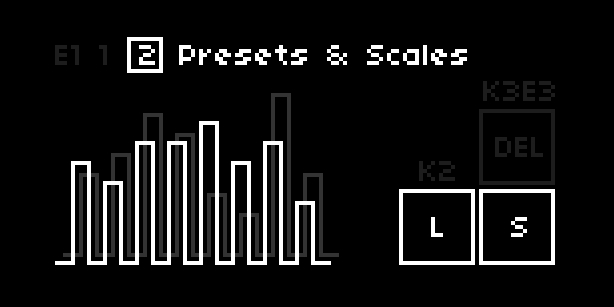 The second block of LEDs represents an octave on a piano, black keys on the top row and white keys on the bottom row. Press any of these keys to change the root of the current scale to the corresponding note. 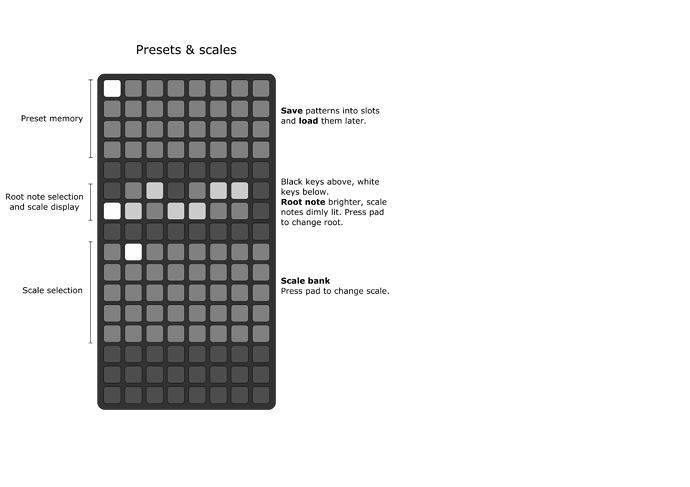 Awesome!! I had some grand plans for m18s but it’s been a struggle to see things through. I’m really excited to see your take. There’s a lot of really cool music to be made with this type of sequencer I think

I totally agree! I love the idea behind the sequencer, especially with some external modulation for the envelopes of the steps. Adding a second voice makes it very fun to play with too.

I loved your take on it, the norns UI is beautiful! Would love to see your plans for it happen

Great sequencer! Deceptively complex for what seems like such a simple dual 8 step sequence at first glance. I’ve got this up and running on my Norns making sounds internally, but can crow currently output cv and gates for the two sequences or is it just for clock in? I’m not near my modular to check…

I’ll edit the docs to make this more obvious

This looks great. Will this work with Grid and Ansible? I’m keen to replace my actual Metropolis (also based on the m185) with an Ansible and a grid

I wish I had the programming chops to port this to @scanner_darkly’s multipass and have it on ansible or teletype, this has crossed my mind but feels a bit daunting to be honest

this makes me want to figure out how to use a sequencer - grid interface looks great !

This is wonderful and I am excited to give it a go!

@markel_m
You HAVE to find someone that could port this to Ansible to get it into Eurorack.
What skills would they need to have? Is it very different programming for Ansible vs Norns?
People would really love this if it could be done.

Is everything open source, and anyone can access your code to port it potentially?
Sorry if my questions are dumb, I’m new to the monome world, but excited by it.
Having this on Grid and Ansible would make my day!

I think I will try to take this on at some point after I have refined the norns/crow version, in order to learn how to write with multipass. But it does feel like a bit of a challenge for someone like me, who has not written anything in C besides basic teensy/arduino code. It’s hard to leave the comfort of the lua environment once you get used to it! But this is a good reason to learn more stuff

had a lot of fun messing with skylines this evening.

Everything was clocked through ableton link, which is still the most incredible thing to me. Had three oscillators controlled by the two skylines voices (via crow)…1 with mangrove doing the more bass-y plucks and 2 both plaits (the classic waveform mode) and verbos complex oscillator doing an am sound. I used just friends to generate envelopes…some combination of it’s own cycling and triggers from skylines.

The sequence was pretty sparse, so I ran it into supermassive’s sagittarius algorithm and this weird angular swing developed with the rhythm that I thought was pretty cool.

Not sure if this will eventually get more layers or not.

This sounds amazing!! Glad you are enjoying it, and great to see that the global clock is working well through Ableton Link in the script too, I haven’t tried that yet!

I have also found that clocked delays work very well with this kind of sequencer, had mimeophon on that duty in the demo.

Planning to add midi over the holidays, as well as a bunch of UI improvements

midi transport out is already in though!

(All I’m thinking about when I hear the word “skyline”)