Hi,
i’ve been working the last two days on a sequencer that i will use in a museum in situ with a sculpture from Sol Lewitt (who is one of my major inspiration in the relation between music and the other arts, btw).
It appears to be really fun to play even in a simple musical context, so i thought i would share, even if it’s far from finished.

It’s meant (for now) to be used with an Ableton Live’s Drum Rack.

You can load up to 4 of them in a 128. Each consists of two 4x4 squares. The top one represents the Drum Rack. The bottom one is for functions and play.

16 Drum Rack Cells. You can just play them if the ‘Live’ function is on.

From bottom to top :

Load a SLMaster anywhere.
Load one SLPatterns_DR_Sat in each Midi track hosting a Drum Rack. Change the # of each Satellite.

Hit Play in Live.
Hold a preset button and tap a pattern (Step by step). Release. It plays. You can then hold the OVERDUB button and play ‘on top’.
Record several presets. Have fun with rate, mute, retrigger, reset and switching patterns.
Multiply this by 4 Drum racks.
Use the two midi-mappable buttons of the Master device for your glitchy thoughts.

Is it the missing trigger part to the renome patch?

Well i have not pulled the trigger to use both at the same time but that might be crazy.

Maybe we can help with this…

I remember using the rene’ for playing notes and sending the trigger to a drum module, nice crazy beats.

Lots of fun to be made…
I seriously can spend hours with four of this triggering nonsense samples.
I used to perform with Renome driving to voices alongside pre-made drum clips, but this could lead to a 100% live and improvised setup.
Will give it a try when i can.

Anyway feel free to suggest changes and make tweaks. I already feel the need of a live recording option.

this is so sick CF!

Cool!!!
Sorry if I always jump on your patches but they are so inspiring!!!

I will have a play as soon as I got time but I will definitely take the invitation to propose changes and try to make tweaks.

Does this new patch have autofocus?

(about the Renome, X and Y directions are already there, unless you mean the trigger sequencer itself ?)

Well…autofocus can be easily added.

Regarding x and y directions for renome, it is true they are already there but you need to press the button everytime you want to change…instead I would like to include the command in the trigger sequencer…
This shall allow to produce sequences like the original Rene’ (like snake and pendulum mode)

Why not, like a double-press, the step would be half-bright, and would make the counter go backwards.
My only concern is it would be confusing in use.
I’d rather set this for the pad square itself and just add a pendulum mode. (Anyway, this should be in the renome topic !)

This thing is badass! Nice work!

Edit 3: Would be nice to be able to set a starting note (so that you could move around in a > 16 pad drum rack)

Edit 4: Would be nice to be able to sequence rests.

@chapelierfou,
Great Patch! I had a blast playing around with it right away! Very addicting.

I am trying to add autofocus to it. Here is where I am at: The drum pattern lights are appearing as they should. The bottom control lights are not reappearing though. Maybe @elquinto or @jasonw22 can chime in on what I need to tweak. 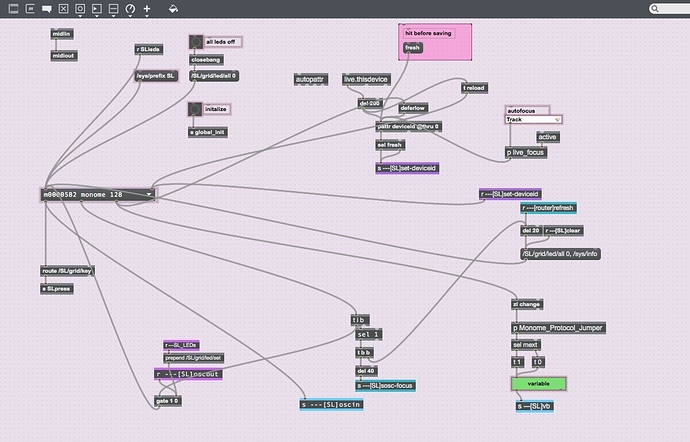 Thanks @jasper_ryder for the effort !

Did you set the prefix and hit initialize ?

Thanks for this. This is really fun! Super groovy. What was the rest input?

Insert a silence : while holding the preset button, hit the first pad on the top function row.

More to come quite soon :

I just uploaded the new versions. Please download both, i didn’t change the master’s name but it’s been updated.

TIP : you can record an empty pattern entering the number of rests you want and then overdub !

to do : recording a new preset while the previous one is still playing.

You’re on fire! Can’t wait to explore the update. Thanks.