Umbrellas is a multi-interface MIDI hat for Raspberry Pi 4. Some time back I noticed that the pi4 has 5 UARTs and thus could act as a multi-port hardware MIDI and USBMIDI router. Hardware/software hacking ensued

also found out we can’t make MIDI connections using WebMIDI, we can only send bytes from outputs, and connections are assumed

Fwiw - You could run the umbrellas stuff without the hat I suppose if you only wanted usbmidi devices.

@okyeron: Umbrellas looks great, I guess the only downside is RPi availability currently

Yeah its been kinda hosed by rpi unavailability.

I’ve had a device like what you described above in mind for awhile as well. Was waiting on TinyUSB on rp2040 to stabilize for midi stuff - as a bunch of work was done on that very recently.

Hobbytronics sells a bunch of different usb midi host hardware ( chips and a board) that are tiny. Link here:

Went down a rabbit hole this afternoon thinking about building an interface using a spare teensy 4.1. 8 serial busses, built in usb host and flash storage. Utilizing a USB host chip like this one, or this one (with built in crystal), 4 usb in ports could be added. My initial thought was to make it really small/thin, 4 trs in, 4 trs out, 4 usb-c in and run the teensy main usb connection to another usb-c port for uniformity. Additionally two digital I/O could be used to send/receive modular clocks or clocks to/from pocket operators, gameboys, etc… over 1/8 TS jacks.

Started a layout in kicad then remembered I don’t really have a use case for this kind of project… The norns shield has all the usb ports I need and I don’t have too many midi devices otherwise… Anyway just wanted to say it wouldn’t be too expensive to put together, you could send it to jlcpcb and have them assemble 5 boards for under $100, then add teensy’s and enclosure. If anyone gets a fire under them to finish this kind of project I can help out.

Hardware wise I tried this with a T3.6 and the TI usb chip but never got the crystal right and kinda back burnered it forever.

I was curious about how the USB hub chip would work out, thinking of just making a small board with just the hub chip from lcsc to see if the built-in crystal works without much trouble. I like the idea of it running without the overhead of linux but then again extending umbrellas with a midi router would be easier than rolling your own on the Teensy.

I think the big advantage would be to have something which could ultimately be quite small using only TRS midi, TS clocks and usb-c.

edit: actually I’m just going to use the FE1.1S which seems to be working better with less overhead (and pins) than other options… Will update if all goes well.

I’ve seen it mentioned elsewhere on this site, but in case anyone is browsing this topic: the Retrokits RK-006 will act as a USB host, and also has a ton of flexible routing possibilities, including DIN Sync and output triggers for modular systems. 2 physical MIDI in, 10 MIDI out, and can host multiple USB MIDI devices via a hub. 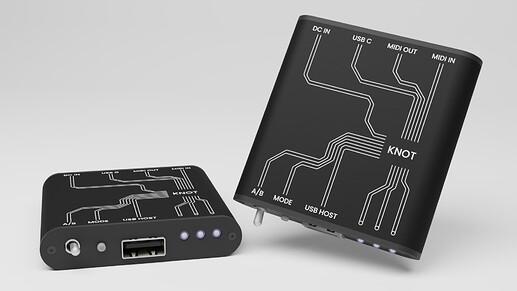 I know this is four years later, but its still a common issue if your building your own junk.

So I wanted to add a few notes on my journey using a USB host device.

The hobby tronics adaptor is pretty rock solid.
Although the firmware on the PIC chip is not opensource, i’ve found adding an Arduino compatible MCU makes it really easy to run the excellent Control Surcface library.
This enables to you to pipe MIDI streams to other serial ports or modify the stream to do what you want, filter, store transmit over bluetooth. Plus you can add knobs and switches of your own and add them to the MIDI stream. The world is your lobster.

Morocco Dave has written up how to add MIDI sockets directly to the hobbytronics board.
https://moroccodave.com/2017/10/04/diy-usb-midi-host/

All of this works great for simple MIDI keyboards or knob banks, silder banks etc.
But if your controller is very feature rich it may contain its own USB hub internally.

This board will not work for that.