Continuing the discussion from Field recording:

@lijnenspel, would love to hear your experiences when you get around trying the EM172.

Also, like @widdly, I’ve used class-compliant USB recorders together with my Android phone. It’s a great solution to capture a jam session, works in conjunction with video too (Open Camera app allows you to choose your audio source). But I’d love to have something more compact, a small electret mic (or a pair) that I could always carry around to capture an interesting sound.

The EM172-based Clippy would be great, provided that the 2v plugin power from smartphones is enough for it: http://micbooster.com/primo-microphone-capsules/98-mono-clippy-em172-microphone.html

Got it working, will hopefully make some demos tonight!

My impression, having worked on network voice quality test equipment, was that mobile phone headset inputs have pretty aggressive auto gain control. Maybe it is only enabled when the phone is on a call. I’d be interested to hear your results.

that is often true by default, but AGC can be disabled, and i’d think a good recording app would do so.

if one happens to be compiling a DSP graph from Faust, use the -NOAGC flag.

haven’t looked at android audio in a few years so can’t speak to it.

sorry for the technical derailment.

i too am interested in a good mobile recording setup, in my case for iphone/ipod (and not actually for personal use, but for a client.) specifically it would be awesome to find a way to power and capture some decent binaural microphones like roland CS-10EM… dunno if this is really feasible

Interesting topic, I was also thinking of getting a pair of Clippy EM172 for mobile recording.

that is often true by default, but AGC can be disabled, and any competent developer of mobile recording software should know how.

I haven’t tried a lot of apps to record, but i know that on iOS Audioshare has the option to disable AGC, indeed called Measurement Mode.

Good to know about disabling agc. A bit of googling shows an undocumented and version dependent option on android too.

Are the headset inputs stereo? I reckon it would be mono only.

I feel like a naysayer on this thread but I’d love to see something decent that works. I’ve got a portable recorder but usually it’s at home when I’m hearing something awesome out and about.

on iOS, yeah; AFAICT you can really only get a mono input from internal mic or TRRS to a coreaudio session. iphones have multiple mics now, but they are locked down for internal use in feedback suppression, noise reduction &c.

[edit] sorry, belatedly realized that i should clarify and hence the bold text. on iOS you can record stereo with an external audio interface.

On Android, at least “Easy Voice Recorder Pro” (perhaps the free version as well) let’s you disable AGC and other voice processing by the device by choosing “Music and raw sound” from the settings. I confirmed this with the developer as well.

@_mark
Continuing the duscussion from the other fieldrecorting thread:
The ‘irig pre’ is a device for your iphone/android that powers and connects to XLR with a preamp.
Nothing fancy high-endy but it will do the job.

(That one’s sold out though.)

Some updates on my little research

I sent the edutige microphone back as they are totally not sensitive.

Jonas from LOM wrote me back that the Usi are actually just EM172 and that he actually tried them with smartphones with poor results.

Also did some tests with the EM172 myself and it seems that its works on my ipod touch over trrs, but audio is quite noisy. Think I forgot to turn off wifi, so that might be a cause, but I think the 2.7v pip is not optimal. Would just adding a coin cell battery be sufficient? Gonna try today. Also frequency range of the ipod seems quite limited over trrs.

oh and for those without a headphone jack on their iphone 7, here’s a “how-to”

Jonas from LOM wrote me back that the Usi are actually just EM172 and that he actually tried them with smartphones with poor results.

I’m a bit surprised as I thought the Usi had really good low frequency response from the reviews I found, and even remember a post by Jonas explaining he found a solution to minimize it (fixed HPF) because low frequency handling cable noise could be sometime be too present and undesirable.
Looking at the EM172 datasheet, frequency range look to be 60-20000hz.

The good news is that I’m quite sold to get some EM172 capsules and go DIY now, or even buy the Clippy version (was looking for USIs for a long time, missed them everytime they were available).

Would just adding a coin cell battery be sufficient?

That should perfectly do it, tell us how it goes!

I’m a bit surprised as I thought the Usi had really good low frequency response from the reviews I found,

Does anyone have any experience/opinions using the various microphone attachments for the iphone to do field recording/etc? How do they compare to some of the entry level handheld recorders like the Zoom etc?

I feel like since I always have the phone with me why not use it as recorder, I could keep the mic in the bag I always have with me. But then if always have a bag with me, why not have a dedicated recorder?

I have my eye on these two: 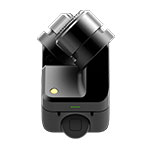 The RØDE i-XY is the ultimate recording microphone for iPhone® or iPad®. With up to 24-bit/96k* recording and on-board high-fidelity A/D conversion, your iXY recordings are rich, smooth and accurate.

But then if always have a bag with me, why not have a dedicated recorder?

This is the question I recently had. I used to do a lot of field recording with my iPhone. It’s been long enough since I was in the field recording habit that my mic (which I can’t seem to find so I forget the model) no longer really works with my current iPhone. When I decided to start doing some field recording again, I started by researching what was currently available for iPhone but then changed my mind. I decided that the process of using a mic on the iPhone was just too fiddly — take the mic and phone out of your pocket, plug in the mic, open the app, unplug and re-plug the mic ‘cuz the app doesn’t see it, click new recording, adjust levels…by that time the moment has passed. So, remembering that, I decided to go with the Tascam DR-05 (I first tried a Zoom H1 but exchanged it for the Tascam. The Zoom was smaller, which I liked, but it just felt like plastic garbage and I didn’t trust it). It’s a little big, but still pocketable. It might be bigger than you’d want to carry in a pocket all the time, but if you carry a bag anyway, it’s probably not a big deal. It’s still a little new so I can’t say 100% that I won’t change my mind, but so far I have no regrets.

I haven’t used it, but I work with a guy that does field recordings on the Rode - I’ve had to work on the subsequent recordings and they come out great - much better than I expected.

High-quality audio recording solution for everyone, everywhere and easy to use. Whether you're a videographer, musician, blogger or a student attending class, Instamic captures your every-day sounds at the tip of your fingertips.

I am almost intrigued enough to pick one up and check it out. Really like the idea of the magnetic base… that is something I feel like I would use a lot…

Sorry if this is an old question, I’m looking for tips for iPhone video + audio recording of stereo line-in signals. I have an old Art USB Pre which nearly works through a usb/lightning cable, but regularly fails with a ‘this accessory not recognised’ error.
Please do refer to another thread & delete this if I’ve missed it.

Im enjoying the Roland Go Mixer. Nothing super fancy with lots of inputs and plays nice with my iPhone. They just released a PRO version but I’m not sure of the specs on that. The only downside is the included micro USB to lighting cable that is only 2 FT.