Hey lines, I’m typing this on my phone as I sit at a doctors appointment, so bear with me if you spot any typos.

Today, a friend of mine shared how they found their Akai MPC 2k at an Ohio thrift store. They sold it to them as broken because the previous owner took it upon themselves to do some mods to the drive and failed. Upon switching the drive back, it worked like a charm. This device led to them getting into electronic music production. And as the early 2000s emo ballad goes, Ohio is for lovers, they’ve lived happily ever after.

I got to thinking about my relationship with one of my instruments, a 1991 Rickenbacker 2030. I was walking down the aisle at an old guitar shop in a suburban town in Michigan, looking to upgrade from a MIM Jazz bass I bought. Sitting on the top row was this funky looking bass guitar, kind of like a Mustang mangled by a kaleidoscope. I grabbed it down and it had a completely polyurethanes fretboard, a broken tuning machine, and a Garfield sticker on the back. I plugged it in and gave it a go, immediately loved the sound even with dead strings. The price I paid was dirt cheap, and it’s been with me through my punk rock years, on multiple tours. I still play it as my main gigging bass.

My question to you is: how’d you two meet? Everyone has that one instrument that they inherited that is broken in just the right way, or found at a pawn shop, or maybe gifted my a friend, that someone seems more special than other ones. If you want, feel free to post a picture with that special one, share a track and tell us the story. I’ll probably type up a longer version of mine later one.

Could be fun to collect these into a little zine and put them out as a community project! 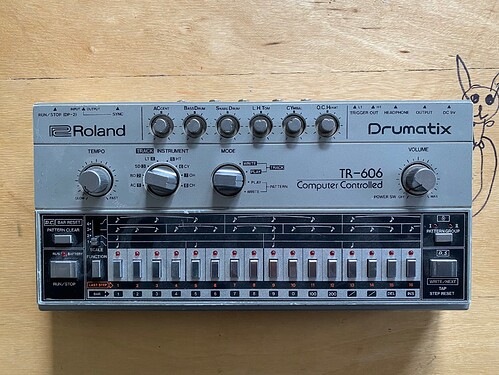 this is my 606. there are many like it, but this one is mine. I bought it at the santa cruz flea market sometime in 1994-96 for $40, I think from the same hippy I also bought a $10 EH DRM-16 from (should have saved that too). I bought it in the afternoon and immediately went and scrounged the C batteries required and took it for a walk with my then paramour out to a train bridge to see an evening bat emergence, all the while trying to figure out X0X programming as I walked. I immediately fell in love with the portability and the sound of the cymbals washing into each other, set against lavender evening light in early summer. I tried to mod it for individual outs at one point and it now has a parasitic drain, so it has been filed away, outshined by other things. but I fired it up a couple months back and it was like a phone call with a very good friend you only get to talk to once in awhile. it was my entry into drum machines and then almost immediately, synthesizers, and has set the path musically for everything to follow.

My first non-guitar instrument was a second hand Roland MC 505. A guy I knew showed me his MC 303 and I was amazed what that box could do. I picked up a flyer for the MC 505 and that seemed to have even more potential. I found a small add in a magazine, somewhere mid 1998 if I recall correctly. The 505 had just been released, so it was quite rare to already find it second hand. After a two hour’s drive in the tiny car of my then girlfriend’s gran, I arrived at the seller’s house. The guy turned out to be a DJ. His living room was packed with large crates filled with 12” records. There was a DJ booth in the middle of
the room. He was nice, but kept ranting stuff like: ‘this thing is unsuitable for DJ’s to use’. He said he was ‘misled by Roland’s advertising’ and that ‘he’d be happy to get rid of it, but could not promise me it would be of any use’. He was so seriously angry that he sold it to me for less than he could have gotten for it. To me (and my brother) this machine was heaven and a splendid introduction to hands-on synthesis and a great composition tool. I never could have afforded a new one. So I will eternally thank Mr. Grumpy DJ for selling his to me.

Here’s a bit about how I used it in my early days.

Which gear or workflow setup has brought you most joy and productivity? Process

Great topic! Made me think about what joy and productivity in music mean to me. Today they are very different from my early music days. But let me answer the question straight away, as it dates back to my early days: a Roland MC505 I bought from a DJ in the late 90’s. As a student I worked side jobs and saved diligently to be able to afford it. At the time it was the most expensive thing I ever bought in my entire life. It felt like ‘an instrument from above my league’. I did not know the full …

I have just recently finally fixed the last major issue on an old electronic Roland piano that I got for free. It stood in the hallway of the last shared flat I’d been living in a few years ago collecting dust. Apparently, up until a while before I moved in, everyone living there had been a musician, and this piano was left behind by them, probably because it was mostly unusable. The sliders and buttons were all broken, which meant it could only be played at full volume, and it really gets pretty loud. Also, the middle G key would always trigger at full velocity. But when I moved out, I asked the rest of my flatmates if they’d be cool with me taking it, and they agreed to trade it for the cheap industrial shelf in the kitchen that was mine.

So over the last few years, I made several attempts at fixing the piano up, first cleaning it, then fixing the broken sliders and knobs. Luckily, those replacement parts are easily available. Unfortunately, my first attempt at fixing the middle G key failed spectacularly. The issue was that the a knob on the rubber that triggers the sound on the circuit board when the key gets hit had a crack, so it would get stuck for a split second and then shoot back, triggering the sound at full velocity. I thought it might be fixable with plastic glue, but that just made the rubber stiff and would result in a similar problem, still triggering at full velocity.

A few weeks ago I had the urge to give it another try and found a somewhat fitting replacement part on eBay. I had to cut the rubber to shape, but luckily it fit and works like a charm, so now I have an electric piano with weighted keys that I got for (almost) free.

Not quite the romantic end to a love story, but I have to add that I barely know how to play the piano and mostly sit behind it from time to time to dabble around and improvise with my underwhelming skill, but whenever I do, it makes me really happy to be able to make it sound pleasing to me with knowing next to nothing. It’s always been a dream of mine to really learn how to play though and I also want to use it to learn more about music theory. 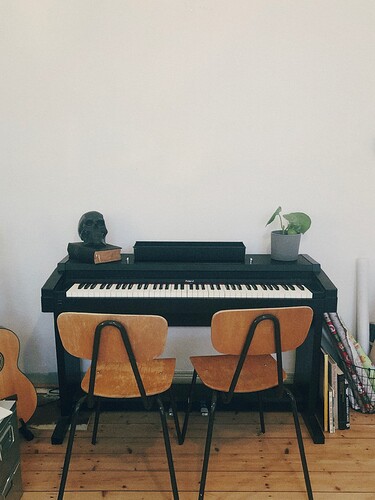 I did however redeem myself living in Singapore in the 2010’s when I bought a TR909 for $120 from a guy who had it in a bag with bicycle parts. It was covered in grease, smelt of cat piss and the clap didn’t work. One time I rented it out to a club for some Detroit DJ and got more than I paid for it. It sounded so amazing going through a club pa. 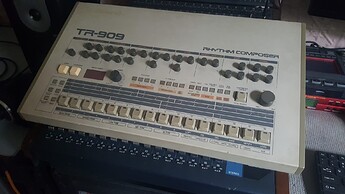 I have a DX7 that I kind of inherited from my uncle, in the 80’s he was playing in a band that recorded sessions in a studio, to record backings for some pop thing, and at the end of the session they said “well, there is no contract and we’re not paying you guys” so they decided to steal some equipment to get sort of even, in which was said DX7 (80’s classic !). My uncle played bass, he had not much use of it, some day he left it behind at my house (he use to play with my father), and I took it. Years after I said to him “I have your DX7 !”, he answered “Oh, well, it is not really “mine” and you’ll use it more so it’s your’s !”.

He died a few years after that, and right now the DX7 is not working anymore, it throws out weird white noise from time to time, like if FM algorithms are being changed and OP’s levels put at maximum level, then back to normal sound. It is kind of funny sounding but at the same time it reminds me of my uncle, he was a bit weird, definitely a really good guy and I miss him.
I decided I wanted to learn an instrument after seing him play with his friends at his wedding !

Edit : there is a sticker underneath it with the name of the studio lol.