New device from Vlad at SOMA. Not sure I’d call it a synth, but a synth-like device. For expanding (or possibly contracting) your consciousness. Vlad is clearly having some fun, but I think he’s serious about developing some kind of mindfulness practice around this device.

"I want to share some weird and powerful techniques I discovered on the junction between electricity and shamanism, science and spirituality.

This was at a time when I investigated intensively some strange projects and tools that were created in underground Russian physics research and such things as the Global Consciousness Project from Princeton University. At the same time I was doing my own inner practice, trying to discover the reality that lays behind consciousness, shamanic practice, this invisible world and the force that we call “soul”, “spirit”, “life energy” and “inner world”. Some of my studies turned into technologies that can be seen as electro-shamanism, a kind of cyber-dzen. Many techniques and methods for exercises were developed based on these devices and technologies. Successful implementation of these practices gave me radically new ways of perceiving the world, life and myself, as well as a deep connection with the unconscious and a kind of magical way of acting. All SOMA gear was created using this experience and the esoteric approach to engineering I developed during that time. Now I would like to share these dis-coveries with the world, as I think we have to do more experiments and further investigations in this area. I also feel a lot of people could beneﬁt signiﬁcantly in their life and self development from this. And no less important, I feel that with this approach we can ﬁnd a new spirituality and self-awareness that is ﬁtting for the 21st century, when satellites are ﬂying in the sky instead of angels and in Padmasambhava’s cave we have a well-working internet connection.

The name “Quantum Ocean” points to the base phe-nomenon of the Universe that can be called Chaos, and which is observed in its purest state on the quantum level of matter structure. I gave this name to the project because all real effects that were discovered during these experiments were connected with different kinds of natural chaotic processes. Little by little I realized that here we have an important secret key and I started to explore this direction intensively. Quantum Ocean is the ﬁrst electro-esoteric, electro-spiritual project that has become ready for public release. Of course, the main secret is not inside the box with the circuit, but in your brain, so, actually, this is a deep practice using an analogue electronic device as a living icon of the inner-most root of life and the Universe — a kind of modern, inner alchemy."

YES i totally know what this is now …

Where can i throw moneyz?

The presentation of this (including an extensive manual of practices) is neat and really tickles me, but I would love to hear what it actually sounds like!

Sounds like the inside of your head! Haha. I guess we’ll have to wait and see. Order submitted.

“Analog noise”, for 150 euros plus shipping and taxes.

he dropped the bomb, excellent. Lets bliss out-

The absolute madman Vlad. I think he’s selling dreams and getting way too high on his own esoterica, but I love him for it and am glad Soma exists. Will probably buy one just for laffs.

So much this. Y’all let me know when you find the Living Stream.

I’m all for meditation, but this kind of psuedo-science woo woo is a turn off. Scientology has some E-Meters available if you’d also like to measure your Thetans.

When you are pretty familiar with the previous exercise, go deeper into it and stay for longer. Watch the changes that happen again and again spontaneously, without your efforts or intentions. At a certain point, you will discover the Living Stream that flows through the QO space. It’s always fresh, new, unpredictable. It brings spontaneous changes to inner and outer life. When you discover it, you experience feelings like you observed something important, the living source, an inexplicable formless but moving being. This is an important deep root of life and the Universe. Many exercises can be built on this and it can be very beneficial in life and affairs if you are able to remain deeply connected with the Living Stream. Since the day when I discovered it and got the connection, I feel like I started to live a new life. But for now, just watch it and be relaxed, happy and full of energy — you are witnessing a mystery.

The main meaning of this and all further exercises with the Living Stream is breaking through the strong isolation of the SeLF, which in most cases is like a lonely island surrounded by invisible but strong walls that separate us from that we can call Life. One of the main challenges of today, and of modern civilization, is that separation from inner things like spontaneous natural feelings, causeless happiness, dreams, inspiration, irrational meaning of life, as well as the separation from the outer life as the direct feeling and connection with other people and with nature. If the Living Stream is found and the connection is restored, life will get its elemental meaning and power. A few lucky people have this connection already in a healthy state without any effort. Usually they are prosperous. But anything to improve this connection is worth it.

They’re usually prosperous, huh? Like, some of this is basic meditation stuff, a lot of it is culty dream peddling.

in a culture dominated by companies jockeying to make their iteration of whatever is trendy in time for NAMM, i will absolutely take soma making niche/arcane/goofy synths and noiseboxes. i won’t be buying this but certainly can’t see any reason to begrudge vlad for being vlad

This type of explanation actually fits really well with the experience I have playing with the Lyra-8.
There is something really special about the way SOMA integrates philosophy in their design.

Yeah, I agree. You don’t need to drop 150 euros on a noise box to meditate. You just meditate. I’m a Vlad fan — I have both Lyra and Pulsar — but I’m passing on this one.

The story around this one makes me think of the whole “communicating with whales” story for the Lyra-4, honestly.

I don’t think this product is intended as a musical instrument at all. Nothing in the documentation suggests this.

I concur with how this fits in with the Lyra-8, and seems to be an underlying philosophy with Vlad’s instrument design. Vlad did a great interview with Esoteric Modulation, focused principally on the Lyra-8, which elucidates on this:

In episode 004 we talk to Vlad Kreimer, head of Romantic Engineering at SOMA laboratory. We have a deep dive conversation on what is esoteric engineering, we then go on to talk about the his creative processes in building instruments. We talk Lyra 8,...

Well, yes ) While I’m thinking Vlad’s Lyra and Pulsar synths are great and am proud that we have such a visionaires here in Moscow I must confess that I see no use for this new thingie )) At least in my works. 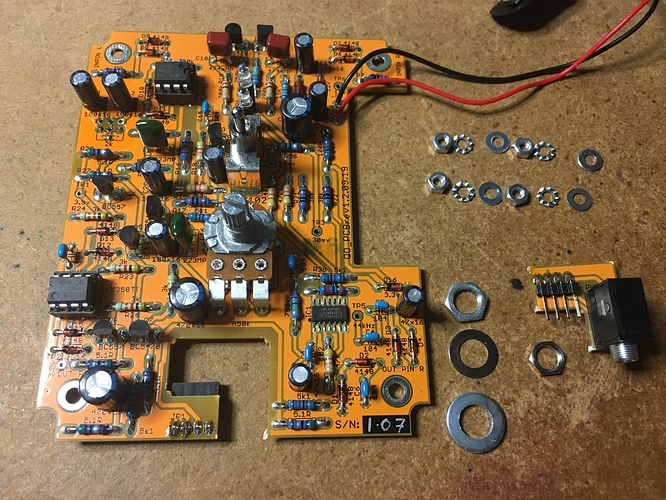 observations:
Not just white noise, but not so different either. It’s got an oceanesque quality, sans distinct surf, as if you were hearing the beach from far away but are inside the sound. I found it quite pleasant at all volume settings. When listening for a few minutes with my fingers on the contacts and exercising calmness, I did perceive subtle irregular non-noise sounds within the surf. This warrants further analysis. I will attempt the rituals but I may not have much to say about them.

Can appreciate if you want to keep your personal practice private, but I’d be interested in how it works out for you–or anyone else with a QO. Thanks and stay safe!

Just to clarify, I may not have much to say not because I want to be private about it, but because I doubt I will have anything interesting to share.

My personal experience of spirituality isn’t usually religious or mystical or esoteric as it is for some. While I find those subjects fascinating they rarely manifest in my consciousness. Dreams, a near death episode, and countless inadvisable doses of curious substances have all got me there, but I don’t have high expectations for any sort of meditation just because I bought a mystery box.

My mind is open. It is not free of cynicism and skepticism. I am curious and lazy. I have vandalized the doors of perception and been satisfied. I am already mostly happy and that’s good enough for me. I adore weird sound art gizmos and trying new things. I don’t want my circumstances or attitude to detract from anyone else’s experiences. Those more dedicated to the internal arts will no doubt be entranced by the tiny voices emanating from their fingertips.