yeah…its nice but it probably isn’t that good

Vlad is very good with his marketing BS, and in a second language at that. He’d make a great Don Draper, skill set-wise.

You know, my wife is Russian and has consistently better word play and cuts deeper in humor than most folks I know, even in her second language.

The first batch will be ready next week, and the second will follow about a month later.

Yeah, I’m getting kind of bored of how the instruments are pre-promoted these days. I’m sure the manufacturers have their reasons and I try to symphatize but at the end of the day all this hype, little hints here and there and all the speculations fill me with emptiness. Sorry to be a wet blanket, back to the studio…

It’s not just the manufacturers, it’s music industry, and people attention in general in the era of social networks

I don’t understand what you think Vlad and SOMA have done wrong. He released a new product on the SOMA website, and released three youtube videos with an overall demo, a performance, and a generative music piece. At the same time, SOMA released the full manual with technical specs and numerous patch examples. The product will ship within a couple weeks of the announcement.

Maybe the language in the demo video is too flowery and emotional? Isn’t this the same place that loves modules that were sold for years with accompanying poem scrolls instead of technical manuals?

There are threads dedicated for “commentary” on the state of hyping instruments, promotion, etc. Personally I think that a better way to combat it is to contribute to conversations that we’d rather see instead.

(Not saying that there isn’t a place for the meta conversation around practices we find unsavory. I would say though that I think this sort of meta conversation slips very easily into being a symptom of the problem instead of a solution to it.)

Anyway! I am very excited about ORNAMENT-8 as a piece of hardware. I have a Pyramid which is great, but I admit I use it primarily as an ARP-machine with a small amount of randomness sprinkled in, and I love Loom & Blue Set as software sequencers, but neither are particularly playable, in my opinion.

Too soon for me to say if ORNAMENT-8 will feel playable—sometimes, for me, things do simply by virtue of being hardware, for better or worse—but I’m excited to try it.

I’ve thought a bit this week about integrating into other, non-Soma instruments / systems… but I think for now the ability to send some triggers out to trigger transitions elsewhere will be a sufficient start.

SOMA contacted me this morning to let me know my Ornament-8 is ready, and sent the invoice. Should have this beast in a week or two. I have a hard time squeezing out the time to make demo videos, but I’m going to make an exception here.

agreed, certainly nothing wrong from SOMA who stay true to their school

Should be pretty easy to make with Vactrols!

Just me, or is this not dissimilar to the Ciat Lombard Rollz circuits?

Do you mean in function, or circuit design? It looks like the Rollz circuits are patched to create different triggering patterns for other sound elements–so in that sense there’s some similarity. Do you know how the Rollz triggers other elements?

The cells in the Ornament-8 have a set of outputs–rising/falling voltage, voltage pulse, and trigger to ground that can all be inverted when the cell is active. Plus the cv and second capacitor input and triggering inputs/outputs, and a shunt output. And performance controls-- the trigger/reset buttons and an offset for time.

I don’t know that much about Rollz, but it looks like a simpler system with a different circuit design. Would be fun to try both, though. 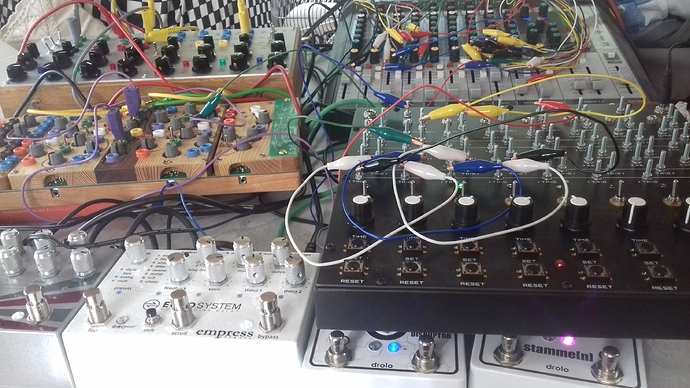 Picked up an Ornament from customs today.
Me too I thought it is kind of a Rolzer from and for Soma. And in a sense it is.
But now I find it has similarities with a fully patchable Korg SQ-1.
Before I had problems to make irregular patterns with the Plumbutter2 or to sync the PB2 to the Benjolin but with the Ornament it is a breeze now.
It is not cheap and not small and I only use half the pins and I would have liked a different color than black but it is very fascinating and useful as a bridge, as a controller and very easy to make many different grooves and fine-tuning these grooves. I believe more so than a rolzer could because of the knobs which btw turn very nicely.

This thing is a complete trip with the Lyra-8. The attachment for the Lyra is super nice. It’s a little playground of voltages—you can set it up and let it go—but the fun is in building patches, repatching, and playing the controls. 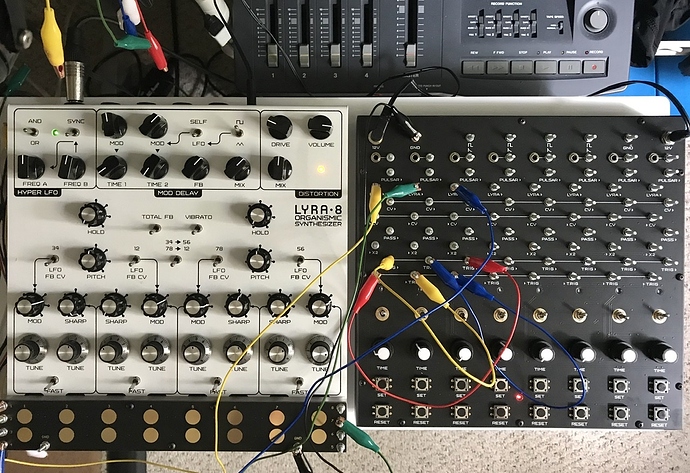 I think it would get wonderfully paired with Serge. Just wandering, how easy is to replace the onboard pins with banana connectors? I really find alligator clips insufficient to use (and try to avoid an extra format jumbler).

The Serge does not like negativ voltages right?
Anyhow no need for a format jumbler. Just get some Bananacables that have 4mm on one end and 2mm on the other end and clip the alligator clips on the 2mm side.

thanks for the suggestion, however I’m still wandering on the possibility of converting the pins to banana jacks…

I second that gator clips affix perfectly to nanas. That is all.

ok. I’ll try the gator-nana solution when I’ll have access to an ornament-8 (and have also the oportunity to open it)