Didn’t find a discussion about this one. Has anyone got their hands on one? Seems like an interesting machine with wide variety of synthesis options, and being able to run on batteries. Looking at pictures and videos I’m not impressed with the design or UI, but hard to tell without getting hands-on with the unit. Main thing I’m interested in is how it would compare to Organelle (or the new M) for someone who wants versatile, compact battery powered synth to supplement modular+Octatrack setup? As open platform Organelle would be more versatile and powerful I guess, but I’m not particulary interested in developing stuff myself or getting that deep into the whole architecture and such.

I guess I have to necrobump this, because I would really love to know about this one as well.

@Philternaut looks like you have one (I’ve seen it in the //// pictures of our sound-making machines //// thread) How do you like it?
I read in a review that the memory on board is really small, not sure what one uses it for, but did you run into any problems with that?

I would also like to know how playable the keys are. I mean, of course I’m not expecting too much from these, they are small and not velocity sensitive. But this said, how do they feel for playing out melodies or chords?

I played it just once or twice, so I will reply to the best of my knowledge.

Echoing @Cloud on the keys: They’re nothing special but that depends on what you’re coming from. They’re still small, you get used to the spacing. Quite serviceable. (Edit to add: They bottom out softly, not with a mechanical-switch click; I kinda like it and it’s surprisngly easy to perform a gliss.)

I still don’t have a good feel for the acceleration on the encoders, sometimes I’ll spin them just fast enough and they’ll engage warp-speed. Probably just me being too enthusiastic. It’s good to have acceleration versus not having it at all!

The onboard memory is TINY. 8MB reported. You can save and load backups on the unit itself which is nice, and it reports as USB mass storage for management. There are only 3 sample slots, which are max 5 seconds/each, mono .wav at 16bit/28KHz. Honestly I use the audio in for sync rather than sampling — the two sample engines are interesting but I haven’t dug into them as much as I should (note to self…).

For presets: 127 memory slots, 50 custom 8bit waveform banks, 20 FM waveform banks. There’s a lot of button tapping to get around presets sometimes, unless you prepare ahead / send program changes.

The sequencer is simplistic but has a few cute tricks, so over the course of a song I’ll usually punch in and out of recording into it, letting it build and loop, and then clear it & start anew for another section or drop it back into arp mode. (Edit to add: Quirky but not intentionally obtuse.)

The interface reminds me of some of the more esoteric Nintendo DS games released for the Japanese domestic market only — I had an absolute ball with those when I lived there years ago so the interface, while quirky, feels weirdly nostalgic. It’s very much the end-product of a passion project. I’m probably not explaining it well, but it has a very distinct personality in its approach, like you get a direct insight into Dr. Yu Endo’s creative personality.

This is getting far too long and absolute unfocused so: I have come to quite like it as an adjacent instrument that brings what it wants to be to the music. Anything else specific you’d like to ask, go right ahead and I’ll try to stay on topic

Thanks a lot both of you! Very interesting! @Philternaut don’t worry about going on a tangent, It’s all really interesting to me. I’ve been looking at this for some time, because I am looking for something polyphonic, small but with a keyboard, and this has even 3 octaves, lots of intersting synthesis modes and seems overally really cool.
Don’t know if I would use samples much on this and 127 presets is probably enough for me.
I’m still a bit unsure about not having velocity. Of course one can always attach an external keyboard, but then, why have an onboard one to start with?

I’m probably not explaining it well, but it has a very distinct personality in its approach, like you get a direct insight into Dr. Yu Endo’s creative personality.

This is one thing I always look for in instruments. So that’s definitely a big plus. Now I would only have to see if Dr. Yu Endo’s personality gets a long well with mine

Now the other thing I am a bit unsure of is programming presets. How well does that work considering it’s only got a handful of encoders?

Velocity: Yeah, no velocity except from external MIDI; that works just fine but as far as I can tell it’s velocity = volume only right now… In the current firmware, two things you should know:

Programming with the encoders is simply tapping through 4-parameter pages. The lower UI shows some dots showing how many param pages there are for that section and which page you’re on; the last one is (usually) for basic modulation options. The fewest is 1 page (basic ADSR), the most by a mile is 9 pages (4-operator FM synth). I don’t seem to get lost and it’s easy to skip around since you don’t have to exit and re-enter layers of menus to go somewhere else for the sound engine. I’d say it’s fairly immediate for the layout, of course not the fastest or most refined. It’s not the deepest sound engine ever and it’s (cheerily) not trying to be.

I’ll say this in its favor: It’s sort of like but immensely less obtuse than the freaking OP-Z with its system of parameter layers and 4 encoders! The ELZ_1 screen is snappy, you don’t feel like you’re waiting on it for anything.

The encoder knobs are ridiculously tiny but they are metal split-shafts and well-mounted. Not plastic D-shafts – which means I only had a handful of spare knobs to change out the Type knob to something else; I do wish that was designed with a different shape! It’s like the data/preset knob on the new Electribes: Too easy to change to something you didn’t mean to if you’re not careful.

UPDATE May 19, 2021: Just noticed there’s a new firmware update for the ELZ_1 that finally implements MIDI Out and (also finally) saves MIDI host/device mode settings on power off. Really nice to see! I had no issues updating. I picked up a used one of these before Christmas.

I’ll be honest, it was “Mo-chan” that sold me on it. As @Philternaut mentions, it has a je ne sais quoi about it. 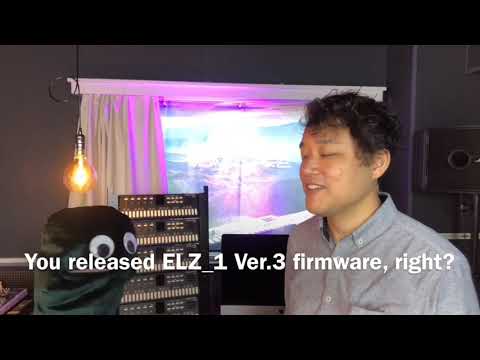