About a month ago, I had the pleasure + honor of sitting down to lunch with @tehn, @kelli_cain, and David Borden at Ithaca Beer Co to discuss David’s contributions to the shape of American minimalism and live electronic performance. Though the conversation was recorded, the background noise of early-00’s Top 40 radio and a full bar made sharing the audio impractical – so, I figured it might be fun to release written reflections over the next few weeks in this thread!

Between bites of pizza, David Borden’s timing remains impeccable . This should be unsurprising given that his metronomic virtuosity is the hallmark of his most well-known body of work, The Continuing Story of Counterpoint (hereafter: TSCOC ). But damn, you just don’t assume you’re gonna get so expertly ribbed by an 80 year old.

If this is the first you’ve heard of David, you’re not alone — his contributions to the history of minimal music are oddly underrepresented in discussions of the mid-60’s New York scene. Thankfully, the 2015 re-release of Music for Amplified Keyboards on Spectrum Spools has helped introduce his legacy to a new generation of listeners. The album features Part Nine of TCSOC , which is perhaps the most compelling display of David’s unique approach to contrapuntal movement. It is a remarkably emotional quarter-hour of dizzyingly interwoven rhythms and melody:

The timbral core of Part Nine is unmistakably the sound of Moog synthesizers. In fact, the central problem that much of David’s work addresses is how to perform counterpoint with monophonic instruments. So, as our laughter dies down, I rephrase my original question: “The work that you were doing was on synthesizers…but does the compositional intent remains the same regardless of what instrument you’re using?”

David is referring to the years he spent “idiot-proofing” (his words) Bob Moog’s first commercial synthesizer. As the story goes, the two met in 1967 when David had heard about someone building a voltage-controlled synth twenty minutes outside of Ithaca, where David lived and worked (and still does). His curiosity far outweighed his technical knowledge, making him the perfect test subject for an instrument that Bob hoped would be easy for musicians to use without an engineering background. Over the course of a few months and countless destroyed modules, David provided Bob the insight he needed to confidently bring the Moog Synthesizer to market. For years after, David would continue to spend his nights experimenting at the Moog Company.

“It took me a while to get used to being in a studio composing with 4-track tape recorders, and sometimes an 8-track. And all monophonic. And I thought, ‘well, that’s perfect for developing counterpoint technique.’ It took me a while to get there, but I did that. And I developed a way of recording one thing, mixing it down, recording another thing. It became a methodical process, which took a couple of years to really get down. So, that changed my way of composing. I really changed a lot.”

In 1969, David established Mother Mallard’s Portable Masterpiece Company with Linda Fisher and Steve Drew, which would become known as the first (and for a long time, only) touring Moog ensemble. Forming a group allowed the counterpoint techniques that David explored with tape — layering steady-metered takes — to become fully realized as complex, interlocking arpeggios played by six hands. Live electronic performance was central to David’s interests, so though he had overcome his early learning curve with the Moog Synthesizer, there was still one tool that failed to engage him — the sequencer.

“I was surprised when I got reviews that said, ‘Now, this might not be what you’re used to because everything is played by hand .’ The guy thought everything [would be] sequenced! He said, ‘But you can hear these little imperfections.’ Well, they’re musical phrasing, they’re not imperfections, you know? I have one piece out that’s sequenced [1970’s ‘Easter’] and that was after years of using the sequencer! It took hours and hours, many patch points, and running through filtered pink noise and white noise to control how the sequencer changed.”

Though he very much valued his time working with Bob, David is not a purist. His current electronic works are all performed with MIDI keyboards and laptops running Reason. “It’s easy to carry around, I don’t have to worry about the instruments being in a certain place or [turned on] at a certain time, blah blah blah. You can program a whole keyboard with different sounds, push a button and in a second or less, you’ll have an entirely new thing.” Though this is practical for his newer works, the 50th anniversary of The Continuing Story of Counterpoint will be celebrated in Barnes Hall on Cornell’s campus with an arsenal of analog synths.

“I have to teach the [new] players to program them, though — that’s the problem. That was the great thing about the early band — everyone knew the Moogs.”

He is definitely underrated

I have two of his albums but legit forgot about him until this (very well written) post. Thanks Dan!

One of his newer releases

I only met him briefly, as an awestruck teenager, but got to hear Mother Mallard’s Portable Masterpiece Company many times while I was growing up in Ithaca. Their (original) period of existence coincided well with my high school years, which was also when my first interests in synthesizers was born. I had heard from my dad about these new instruments, who had gotten some first hand experience with Roger McGuinn’s moog modular. And I was fascinated by the idea of them, and got my first glimpse of them via the Monkees tv show. When I found out they were being made in Trumansburg, about 15 minutes away, I was amazed! I soon found that MMPMC gave fairly frequent local concerts, and they were a good way to experience these things first hand.

They gave a fair number of concerts that I was able to attend - maybe 5 or 6. I particularly remember a concert on a beautiful Sunday afternoon on top of the Johnson Art Museum at Cornell University, a fantastic building designed by I. M. Pei. This picture is from that concert. 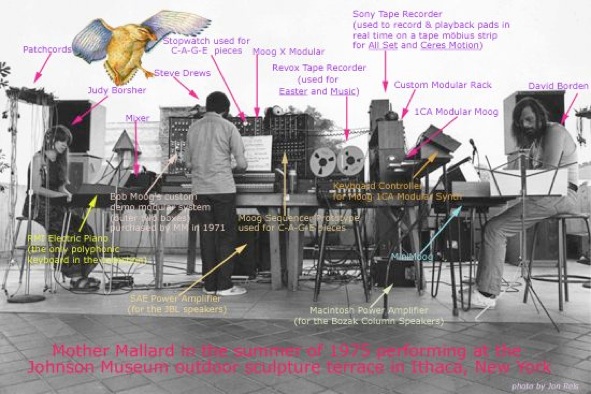 the Music for Amplified Keyboard Instruments reissue came out at exactly the time i needed to hear it - i had recently started playing around with an ms-20 and tape loops in north philly at the time and had never previously heard of him. i still spin it frequently and expect i still will in 20 years.

@glia love that frkwys album as well! prob the most star-studded lineup of the series.

He was a composition professor of mine when I was an undergrad. He taught intro to composition with computers or something like that. This was all MIDI, pre-DAW. Interesting guy.

This is interesting. Completely new name to me. Although it’s music that completely changed who I am, I’m afraid to admit I never made it past the usual handful of names that get labelled as minimalists.

I don’t have the best vocabulary for this, but it’s like there’s a lot more harmonic movement and more use of full scales compared to, say, Music in 12 Parts? It has a much more emotional quality, anyway.

Looking forwards to reading more - thanks very much for the link. 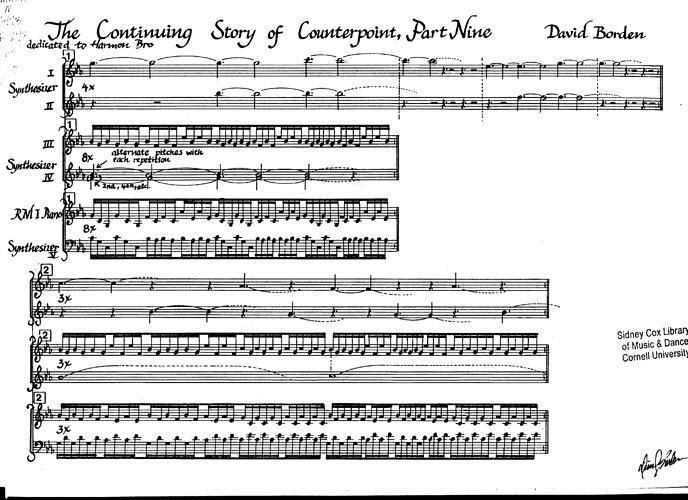 Great interview - can’t wait to read the rest! I have a number of scores of his and they are an endless source of interest. Definitely ranks alongside Wendy Carlos with pioneering the performance of polyphonic music on monophonic electronic instruments.

Huge inspiration! but I’m always shocked that I meet plenty of vaguely minimalist composers (some with synth interests) who have never heard of him! At least it seems like there’s being a bit of a revival for those of that generation but outside of the 4 or 5 big names of american minimalism, a few nice independents rereleasing Mother Mallard, Julius Eastman, Laurie Spiegel, etc.