Soundtrack for The Lost World

Silent movies were never silent and I wanted to raise awareness of a gem from 1925, so I’ve made music for it.

Hear A Soundtrack for The Lost World

This remarkable feature was the first to use stop-motion animation and also the first screened on a plane, at a time when nitrate prints presented a serious risk in wooden aircraft.

The story was written by Arthur Conan Doyle, who “frequently mentioned that Professor Challenger, not Sherlock Holmes, was his favorite character among his creations.”

Willis O’Brien’s visual effects are a large part of the film’s charm and he went on to animate King Kong in 1933, as well as earning credit for the story in the first on-screen encounter the giant ape had with Godzilla in 1962.

Another bit of trivia from Wikipedia:

In 1922, Conan Doyle showed O’Brien’s test reel to a meeting of the Society of American Magicians, which included Harry Houdini. The astounded audience watched footage of a Triceratops family, an attack by an Allosaurus and some Stegosaurus footage. Doyle refused to discuss the film’s origins. On the next day, The New York Times ran a front-page article about it, saying “(Conan Doyle’s) monsters of the ancient world, or of the new world which he has discovered in the ether, were extraordinarily lifelike. If fakes, they were masterpieces”

The Lost World remains entertaining, from the opening slapstick comedy through to the intergenerational romantic rivalry and, of course, the handmade dinosaurs.

You can see the film and hear my soundtrack by downloading the album. 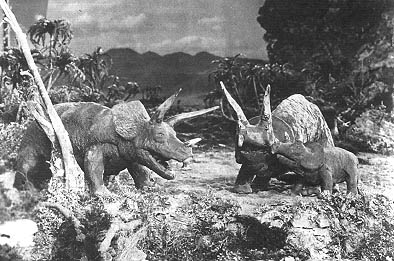 This is a super-cool concept! I clicked the link and there isn’t a way to download/purchase the album… Hopefully that gets sorted and I can check out the visuals along with the music.

Thanks for letting me know, clearly it’s been a while since I published anything on Bandcamp.