I am controlling and clocking a small ER-301 centered eurorack case and an Analog Rytm with my standalone Squarp Pyramid (usb-midi > Endorphines Shuttle Control, regular midi > AR). Although, usually I prefer to just play one instrument at the time simply because I seem to want to avoid using the Pyramid. I am not against outboard control, but don’t like the buttons and the menus on the Pyramid, just not my idea of playing an instrument. It always feels like work somehow, not fun. I keep wanting to replace it with something but nothing comes close in terms of functionality, even though I barely scratch the surface of what it actually can do. I am very fond of the aesthetics of the monome instruments but don’t know much about them. It seems pretty computer-based? and I can’t find technical specs on ins and outs that make sense to me. Is it somehow viable to look into the Grid and Ansible as a possible replacement for my Pyramid? Is this a usb-midi master only? Can I clock my Rytm from it, or can I hack a clock from the Grid in some way to make it work? Would it be worth it?

As a side note, I am a part-time developer and do enjoy an occasional nerd session, but really keen on keeping a balance between playing and programming. I have the feeling Monome is right for me but didn’t get to trying these instruments out yet.

Looking forward to hear subjective opinions and experiences from this community! 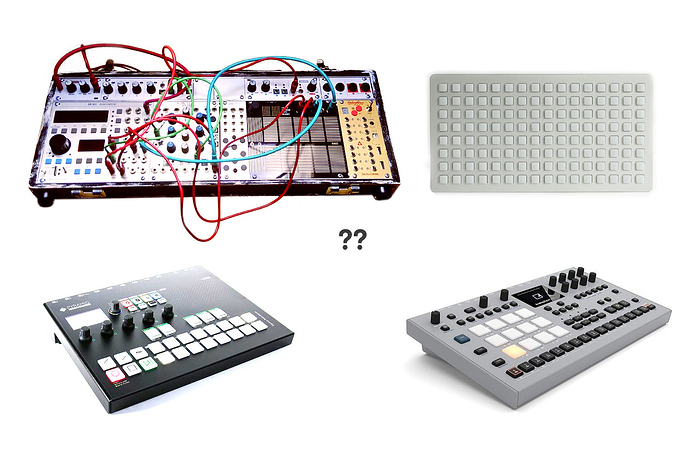 so I’ve no experience of the squarp but I would say that “playability” is absolutely key for me - which is why I’m so into the grid.

The monome apps are very immediate - the grid is very hands on and although there is a computer behind it it’s not very “computer-y” if that makes sense. Ansible has three apps now which are very very playable - I bought it because I was looking at the Tempi (but had reservations about all the button pressing stuff) - Meadowphysics does all that and much more. Kira and Earthsea are both superb too and very playable.

(my biggest issue is that I want to write new things for it rather than having to. ;-))

oh on the clocking - I have a digitakt and a digitone - I love both. I tend to clock my modular via Ableton - I have a simple midi clip with notes in and just use the gate via my FH-1 - but there are a ton of other options.

I had the Pyramid for a while, and loved it. That said, I eventually sold it on. I currently have 3 Ansibles in my main case, and can’t see them going anywhere.

Regarding clocking: I use a teletype, or a pams new workout to clock my ansibles, but looking at your case… you could easily clock shuttle control from your rytm, and patch a clock to your ansible.

I currently have 3 Ansibles in my main case, and can’t see them going anywhere.

yeah - I can see buying more grids and ansibles (& an arc

Oh I see, that’s very useful information! Indeed I could use Shuttle Control as a slave of the Rytm. Wouldn’t have thought of that. One capability I like on the Pyramid is the BPM modulation option though. Going back and forth between different tempi (I suppose that’s the actual plural for tempo

) is a cool performance trick. The Rytm would’n be so versatile, but hey restrictions are where it’s at. I’ll have to take a closer look into ansible in any case.

you can search clock division multiplier in row 2 in the ansible docs to see how it looks: https://monome.org/docs/modular/ansible/

Keep in mind with the Monome Grid that it is not a midi device. It requires either a Monome module, norns, or a computer, and you have to have apps the support it (or make your own). The grid has no built in functionality other than sending and receiving OSC messages over usb.

Thanks for the heads up. This is basic information that is not immediately apparent for “outsiders” like me, although I figured as much. So I can’t directly use a Grid with the Shuttle Control for example… Would have been sweet though.