A simple step sequencer for norns 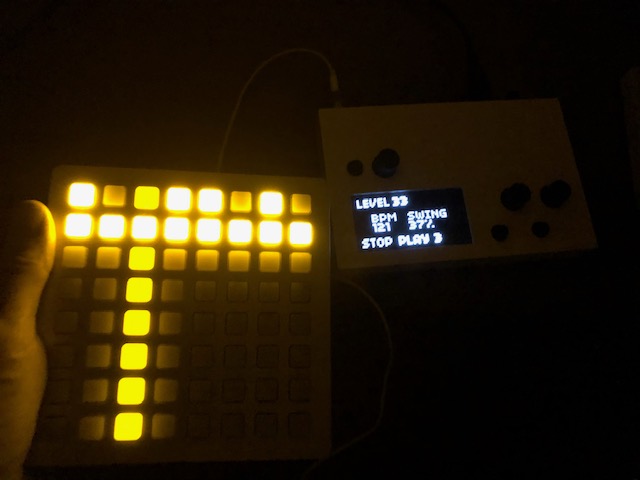 Now updated for norns 2.0 and with a new UI. 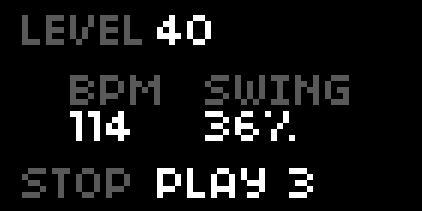 Ack engine has been moved from we repo to: https://github.com/antonhornquist/ack

A small question/suggestion: “stop” pauses when pressed once, when pressing again it stops/resets.
Would it make sense to make “play” pause (and continue playing when pressing “play” again) and “stop” would stop/reset?
Although that doesn’t leave room for a “start from the beginning” action which would also be nice.

Hm. I’m rather opinionated when it comes to UI and prefer buttons/gestures that do one thing (stop does two things, probably one thing too much :)). That said, it would be easy to introduce an option and make your suggestion possible.

OK, no problem, opinionated is good, I like the UI a lot

I guess this is MPC like behavior? I’m totally not used to that, so maybe the question makes no sense.
Potentially you could switch the “stop” label to “reset” or something like that when it’s stopped?

Have you looked further into the slowing down of the tempo when swing is set?

I guess this is MPC like behavior? I’m totally not used to that, so maybe the question makes no sense.

It’s a bit like MPC behavior. Stop after stopping the sequencer on an MPC (at least on the ones I have), however, will also mute all running sounds. Now that I think of it, this might actually be something I’d like to introduce on reset for Step (https://github.com/antonhornquist/step/issues/4 created)

Potentially you could switch the “stop” label to “reset” or something like that when it’s stopped?

FYI: I’m also planning to implement pattern queuing via grid / arc / encoders and for that I likely will use play as a shift key of sorts.

I’m actively trying to avoid having too many modes as much as possible in my scripts, and trying to be consistent. This is of course a challenge given that there aren’t a lot of buttons and encoders on the norns.

Note yet, sorry. I will try to look into this more soon - strangely, I am not sure I experience this on my device, or the samples I’m currently using are so messed up I’m not hearing it.

BTW. Didn’t you mention that this also occured when not using swing?

@simonvanderveldt have you experienced tempo / BPM slowing down in Step after a few measures?

No, not so far, but I’ve had swing off till now. Can try it later.

@carvingcode found a bug causing Step tempo to be lower than presented. This is now fixed in v1.1.2, which also persists grid width changes.

This is definitely more of an Ack question than a Step question,

apologies. Is there a way/command to unload samples?

Hi @Justmat. There’s no such command, no. Is there any particular use case where you find this useful?

It would be pretty easy to implement.

Not really a use case, but… in foulplay, I would like ack to unload the sample if the track is changed to a midi track.

I created a github issue for this: https://github.com/antonhornquist/ack/issues/5

My norns time is currently limited, though, since I’ve been snowed under at work recently, so don’t expect it to happen any time soon (PRs are welcome!

I just see the letters screen but how is this connected to samples? Cant see a way to use any, sorry if utterly noobish

samples can be loaded in the parameters screen (at main menu turn enc1 right).

It took me a little while to get my head into this too. I now find it frustrating that to ‘audition’ the samples, it appears you have to repeat the entire process. Full disclosure: I am very very new to all things Monome.

I am having trouble getting Step to just play at 90bpm .This is also the speed i have my internal clock set at. The value on screen jumps to wierd decimal point values either side… and i suspect its playing even slower than that.

I love the simple interface of this script and its absolute playability- no tricks to remember, just the right number of parameters.

I wonder if one of the recent updates has affected something.

Hm. I need to update and check do some testing.

Now I got my norns updated after a long hiatus. Can you please elaborate on how to recreate your issue? How are you changin the tempo parameter? Thanks