I was looking for a thread about structure in composition and I didn’t find one (sorry if I missed it, please merge this !).

Maybe I’ll start with an intent to define what I mean by the word structure :
Something like a defined order for different musical parts ?

Do you think about the structure of your compositions ?
Do you sometime think of structure before doing any sound ?
Do you have a few set of particular forms or structures that you find yourself going back to often, consciously or not ?
How important is structure to you when composing / listening ?

Have a good day !

I’m into structures, most of my track follow a general path of intro, theme, improvisation, theme, outro, with variations. Theme mostly consists of two or three parts, I’m still into good old AABA.

The track I’m working on is different though, it’s supposed to be just one part with a bit of variations and a steady grow from small pinks to a huge roar.

For notated music structure is what I think about most. I usually hear a few sound fragments in my mind and then search for a structure to connect them, working from large to small with actual notes being one of the last things I do. I make structure by sketching shapes with coloured pencils (what the shapes represent changes from piece to piece) and I think I would find it hard to compose without those pencils.
This is a sketch for a string quartet I wrote a few years ago and is one of my more detailed/artistic sketches. More recently I’m trying to move towards spending more time working with actual sound during the composition process. I’m also trying to get more comfortable with improvising. 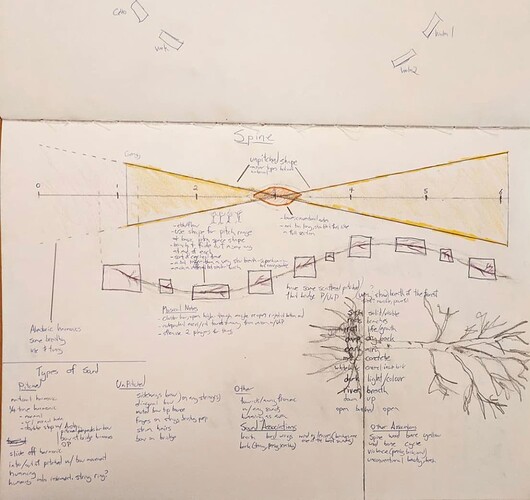 I draw sometimes too ! Really not as well done as what you did there, but I like to imagine a timeline for density of sounds, and global height of pitches and movements, before trying to stick any sound to it.

Something I have been doing a few times lately and really liked was thinking of the piece like if it was a movie : I present a situation with a few characters, then something happens to them, then the situation comes back changed somehow, and the characters too. I know it is a really basic plot for a movie, but globally thinking of those sounds in terms of a dramatic journey helps me see how they could evolve, interact with each other etc.

When I don’t start thinking about the structure, I often find myself stuck somewhere, and it is only after I understand what it is I was trying to do, what the story is, that I can go back, find the structure and finish the piece.

That’s interesting. Thank you for asking.

For sure structures have a great value in music, like in Architecture.

We can define a structure, pattern, divide your music into segments and play with them.

They could be small or large, even improvisations could be settled into structures.

I guess playing with creativity into micro and macro structures, can increase the quality of our compositions.

I love the notion of the empty / full ratio that is so important in architecture, and how it translates in music ! At some point it made me really conscious about density and how that is something to be aware of when composing, and also something that is interesting to vary consciously.
And how micro and macro are linked also, I like the back and forth between the two scales until it feels coherent…

Structure is definitely my number one thing I think about in terms of what makes me feel like a composition is “complete”. When I think about a piece of music as a standalone thing, I want it to be satisfying on its own, so in order to do that, I construct an arc for it. I can have a really great section of music for a long time but not feel satisfied with it until I’ve crafted a structure to fully support it.
For me, the structure usually has narrative or cinematic qualities. I think about things in terms of tension and resolution, and creating something that at a base level has narrative elements (introduction, rising action, “calm before the storm”, climax, etc.) really helps in crafting the ebb and flow of my works. Of course, this doesn’t apply to all kinds of music, but I’ve found it especially helpful in songwriting and more dramatic classical works I’ve written.

I improvise, and structure seems like an emergent property most of the time rather than explicitly designed. I might do a little bit of advance planning of the arc of the thing before I record, but mostly it’s “I feel like repeating that bit… now I need to back off and return to the previous, lower intensity state… now I’ll repeat the phrase but an octave higher or with more FM…” Sometimes a sort of intro, verse, chorus, bridge thing happens; sometimes it’s just a journey from point A to point Z (or back to point A) with different scenery along the way.

It sounds like you’re talking about something I would call form, which is a kind of musical structure. Computer music and electronic music allow for the exploration of novel musical and sonic structures beyond those in classical form.

These are good questions for both though! So, I’ll answer for both.

My go-to for structure is either “recontextualization” or “the same but different.”

Your questions are thought-provoking! I think, for me, the overall structure generally emerges during a final editing process. I’m generally listening to the piece over and over, trying to hear when things need to change or when things change to quickly (of course, repeated listen changes your perception of how “new” things are, cuz they feel less new on your 15th careful listen…)

Structure is pretty important to me when listening. Hearing something familiar but this time it’s different is immensely satisfying. I wouldn’t say I don’t enjoy music that lacks this, but I do miss it.

I am interested in this difference you noted between form and structure, what is it ? I am sorry I don’t get it, I tried to think about it for a while, I am not getting anywhere…

Not classically trained at all, my only approach ever has been to record some thing that I like. Could be a rhythm, could be a melody, or a drone.

Next to listen to it a few times, and then consider a few spots where it may feel like something is hiding.

I do the same thing when I talk to people. Usually they will say one word or idea amongst all the other things that they say, and that one word will be hiding a paragraph or two of information. Things that they want to say, but they don’t know if they have permission to say them.

When people talk about musical Form, they talk about a very specific kind of musical structure, which breaks down a piece of music into sections. Certain arrangements of sections have special names like Sonata, Rondo, AABA, Blues, Rhythm Changes, etc.

But this kind of “form” isn’t the only way people can structure music. To name a few classics: Terry Riley’s “in C” is a composition made by combining different phrases together. Brian Eno explores a lot of musical structures that include repeating loops of different sizes (Music for Airports), as well as compositions that have interactive components with emergent behaviors (Bloom). Many people on this forum use eurorack synthesizers, which often involve creating an initial patch (the structure), and then slowly changing it and making it evolve as as sound object.

While it’s true you could perhaps try and to call these other techniques of musical structure “form”, I think it starts to get a little fuzzy.

Ok, so form is a specific kind of structure, one that is a bit more rigid in that its parts are more isolated, don’t spill in each other ?

I often found myself using parts that slowly change form a state to an other, trying to almost invisibly take you from one place to an other, but then the next change is maybe a bit more blunt.

Anyway I am interested in all kinds of organization of evolution of organized sound in time.

Sorry for the slow reply and thanks for making this thread!

imagine a timeline for density of sounds, and global height of pitches and movements, before trying to stick any sound to it.

I love thinking in densities too! I’m generally not that worried about exact pitch/sound placement since I’m more focused on changes in pitch/density in a more stochastic way.

When I don’t start thinking about the structure, I often find myself stuck somewhere, and it is only after I understand what it is I was trying to do, what the story is, that I can go back, find the structure and finish the piece.

Same here. Even though I don’t think of stories personally, if I don’t plan a structure I find choosing each note/event too difficult because I have to imagine how it might fit into the whole piece without knowing what the shape of that piece is. I’ve been improvising more recently, and that has been nice because it let’s me surprise myself with structure (in general I always want to be at least a little surprised by the music I make).

Fascinating thread - it feels like creating music parts is relatively easy (bars/loops etc) but creating coherent form and structure that is perceived by the listener is less so. Most of the music I have ‘finished’ in recent years has been via film scores, so the form of each music cue in a film is directly based on the narrative of the film - individual scenes and moments, as well as globally.
So maybe that is just one example of an external force shaping music.

I’ve been reading Notes on the Synthesis of Form to see how it can be applied to musical form and love this quote “an irregular world tries to compensate for its own irregularities by fitting itself to them, and thereby takes on form” 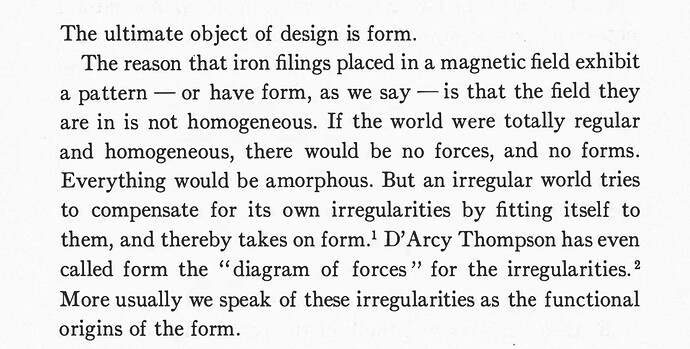 I wonder how much the structure and form of music we listen to, influences our appreciation of it? Consciously and subconsciouslly…

The more generic electronic music has effectively commoditized some elements of musical form eg EDM build up/risers and the inevitable drop. But building tension and releasing it appears in many forms of music, film scores being an obvious example. But are these considered a part of musical form? Similarly, is ‘call and response’ a musical form?

I think my interest in graphic scores directly reflects a desire to understand (and create) structure, especially when considering music outside the limits of traditional music notation.

curiously, i read on growth and form a lot when thinking about improvisatory structure back when i thought about those things full time (music school.)

i think the analogy holds. thompson was interested in how the mechanical environment informs morphology - why a jellyfish resembles a drop of wax in the ocean. live improvisation feels shaped this way - by acoustic and psychic forces / boundary conditions, and by the “elasticity” of the material (or lack thereof)