Sumu is finally nearing completion. For those interested in a preview, I put up some detailed info: Madrona Labs Forums - News - Sumu preview

I’ll be doing a public beta, which I plan to start sometime in December.

Alongside Sumu I’ll be making an open-source sound analyzer app built on Loris. If anyone is interested in helping with this work while I’m finishing up Sumu over the next couple months I have some budget for it. Skills needed are basically C++/critical listening ability/cmake. If interested shoot me an email to randy at madronalabs and please include a link to your bio/github. 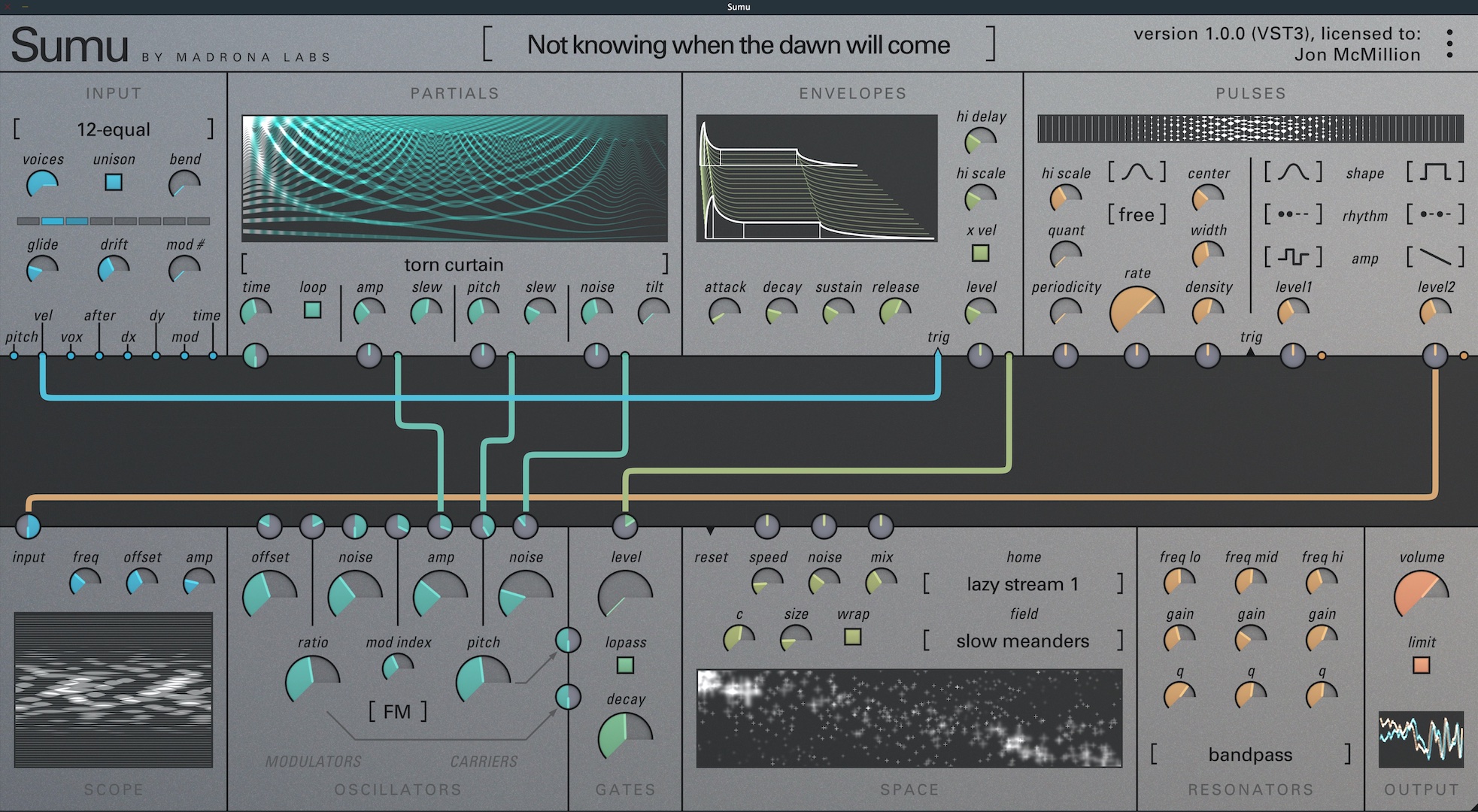 dont know what it is and i want it soooo bad lol love all your stuff !!

This looks like it’s going to be incredibly cool. Can’t wait to hear it and try it!

this is wildly exciting!

It’s public! There’s all the room in the world.

I’m actually beta testing an Aaltoverb update that is built on my new layer, first. That will be next week or so and at that time I’ll send out the info on how to sign up to the Discord and participate.

i’ll look out for more info

Wow. Really amazing. I can’t wait to try it out.

Excited for this! Congratulations on being close.

BTW is there a back story that I’ve missed that sheds light on the Finnish language naming convention of your products?

Very interesting. I have for the most part lost interest in plugin soft synths, but this sounds great. And the analyzer tool for making partial maps also sound great. Looking forward to it.

I’m also in a not-plugin phase, but I love Aalto and Kaivo. Truly original instruments. This looks very exciting.

Kind of a crazy idea but have you considered a resynthesis algo of any sorts, basically what harmor does?

It seems like a really difficult proposition and probably outside the scope of this instrument but just an idea I thought I would throw out there.

Really excited to try this!

Edit: @Starthief cleared the air on this, my bad!!

Kind of a crazy idea but have you considered a resynthesis algo of any sorts, basically what harmor does?

In the description it sounds like that’s what Loris does, analyzing sounds and creating partial maps for the additive section.

When I type this in to my search engine, I get some very impressive and frightening research papers about the process. Here’s hoping there are tools and shortcuts to do all this fascinating math for us!!!

In the description it sounds like that’s what Loris does, analyzing sounds and creating partial maps for the additive section.

Yes exactly, offline will be analysis, to build your bank of samples, then in the plugin itself the data is used for resynthesis.

Additive is great at morphing one sound into another… but I’ve never been too interested in the way that sounds or the concept of it. So there could be a version of the external program (I should name it) that does that.

People mentioned it looks Kyma-ish, and indeed this is inspired by some of the things that people use Kyma for. But of course Kyma is a modular environment with “infinite possibilities.” As with my other instruments I’m trying to identify one small set of modules that can be recombined together in many ways.

Thank you for the enthusiasm!!! It’s helping me marshal my focus, which has been difficult over the past year.

Especially the interest from “not too into computers right now” folks is nice to see. My dream setup is still Soundplane+grid+Arc+some computer, hopefully in the future an iPad or similar.

Also, the new UI kit I’ve built Sumu on is designed to be equally usable on touch tablets. I’m continuing to move in that direction, gradually but with a lot of momentum.

My dream setup is still Soundplane+grid+Arc+some computer, hopefully in the future an iPad or similar.

Ditto—this would be ideal, especially if able to run all the madrona software and monome gear on an iPad. Could be just dreaming though.

+1 for M1 iPad compatibility. That would be amazing.

Now we just need some iPad scripts that work natively with grid and arc!!!