Hello everyone, first post here and I thought it would be great to talk a little bit about the latest superbooth: Gear, Manufacturers and the general experiance.

If you attended and saw any of the following I would love your impressions:

Don’t really have many interesting gear impressions, but if anybody caught the sound installation in the hallway connecting the main hall to the gym hall (where the Elektron booth was), that was me and a friend 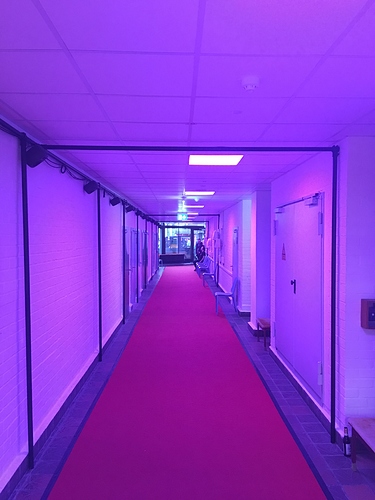 The ALM sampler looks sweet. Also curious about the Megaslope vs MI’s Stages.

The Pan from Synton looks killer and probably my favorite non euro piece of the show.

Not sure what to think about Behringer’s offerings yet. 808/Odyssey/Pro-One/SH-101 clones all look decent…

I rather enjoyed that

I’m especially interested in peoples’ impressions of this. The Sonic State video doesn’t really show it in use, and it’s not really clear if the envelopes are one-shot only or if you can achieve traditional ADSR or envelopes with looping sections. That’ll be the make-or-break point for me in replacing other envelope modules.

So for me this year it was really interesting to see the gear diversify even more than normal, last year seemed to be the year of big sequencers and desktop synths, in a lot of ways this hasn’t changed much but at least (apart from Behringer IMO) most desktop systems shown were really interesting, the new Dreadbox Erebus V3 has some nice additions, the Moffenzeef Stargazer sounds awesome and is really well built (except for those corners, they scare me a bit) I recommend watching this great presentation of it, and the SOMA Lyra 8 was super fun to play with even if it wasn’t released this year.

The first booth I visited was the Livestock Electronics stand, I met Daniel last year and purchased some of his generously designed modules (Felix, a total blast to use and Mir) I checked out the latest prototype of Maze a 4x4 matrix router with 16 presets (can be saved into 5 or 6 banks). The presets can be sequenced, both with a step sequencer (it can do a bunch of operations like Euclidean steps or randomization) or CV and you can also slew the transition between one preset and the next. The matrix itself looks intimidating but is actually really easy to use, you can select different types of selection methods for the “nodes” via the menu. Looking at it online I thought it might be clunky to use, but I was pleasantly surprised at how easy it is to setup. For me the perfect use for it is to make big tonal changes with slow moving LFOs that blend into one another chaotically.

I also checked out the Wrong Electronics Vector Space it’s like a malekko JAG but on steroids, you can control CV range of the inputs and crossmodulate easily with the sources to get chaotic results, it’s a big module but it looks gorgeous and the size is necessary for the impressive analog work behind the scenes.

I already talked about the Lyra 8 in the introduction but I have to say it is really really awesome, amazing build quality and the price is just ridiculous. It is so expressive to work with and surprisingly easy to use, to help you out they provided preset sheets next to the units to make sonic exploration a bit easier without an explanation.

I also checked out the AJH Synth booth, their waveshaper sounded ace and is very HP friendly, and the Swarm makes anything sound super thick, and in stereo too if you want it to be, the only thing it lacks for me is a simple CV control for each channel that controls all the parameters (as in controlling each animation sequentially, first the first animation from 0 to 100, the the next et cetera) but the guy at the booth told me that would be an issue for phase cancellation reasons, bummer

By far the best thing about Superbooth is meeting people, weather they are manufacturers, musicians or random people.

The guys I clicked with the most (apart from Daniel who I already knew) were:

Ross from Moffenzeef, who is super down to earth and fun to talk to, he has a very clear vision about his products, you can really see that the stuff he makes is first and foremost for himself, I recommend watching This presentation he did at Control. Also he was making banging beats the whole show

The guys at SOMA Synths are super fun to hang out with, their engineer (I think) famously didn’t wear shoes for the whole show as documented by many on IG.

I got to meet @whitenoises at the show! who I knew from his great YT channel, he was incredible to hang out with, we talked a bunch about experimental music and the scene from our respective countries, he is super nice in person and an all around wholesome lad. You can check out his channel here

I also met Under the Big Tree at the 1010Music stand (he makes a great series about modular for live performance) he was also really fun to talk to and got a bunch of interviews from the show that he’ll release on his website so look out for that, IRL the guy beams light and positivity from every cell of his body.

I also saw @andrewhuang, Mylarmelodies and LOOK MUM NO COMPUTER at the show but didn’t get the chanche to interact with them a lot.

PS
Edits for links and grammar.

Did anyone try out the Casper Electronics Dark Matter?

I checked out the Falistri and it looks super fun to use, it really improves on the DUSG design considerably, especially since you can have LFO time locked and indipendant from A/D ratio, so you don’t have to constantly adjust the frequency of the lfo when changing parameters like you do on maths. The build quality is as always on point, id reccomend it as an alternative to maths but I imagine it will be considerably more expensive given the commitment to quality that Frap Tools modules show.

I didn’t get to check out the XAOC booth in detail but if you are looking for a well-designed quad envelope id check out the Klavis Quad ADSR, it has all the features you would want, super fast or super slow envelopes or lfos, great control with the sliders and a very complex additional features list that can be hidden away with a click of a button so you don’t mess up your complex envelopes in the middle of a live set, also it saves everything you do in memeory, so when you turn it on it will still be exactly as you left it. there are no videos on it or a page on his website about it so you’ll have to take my word ^^

To be more precise - compared with last big Berlin music/gear event I attended - Loop 2016 - it felt like there were significantly fewer non-male attendees, and very few non-male-owned companies exhibiting. I went to a guitar show on Saturday morning across town, which had maybe 5% female luthiers displaying. SB was (I think) a bit lower than that.

I’m also interested in any first-hand impression on the Casper/Bastl modules, mostly the feedback module (Dark Matter) and the mixer…

Compared to last year there were more non-male attendees, but definitely not enough, there is a significant lack of diversity in eurorack sadly, I was surprised to see more people with disabilities even though the venue isn’t exactly ideal from an accessibility standpoint.

We definitely need to increase the diversity of the brands and get the word out there, there is a good mix in the experimental music scene, so why hasn’t this trickled down to the modular field yet?

this isn’t strictly related (I unfortunately didn’t go), but goddamn it’s refreshing to see these sorts of conversations happen. I’m so used to bracing for the comment backlash that seeing folks react positively is almost disorienting, haha

it’s not really clear if the envelopes are one-shot only or if you can achieve traditional ADSR or envelopes with looping sections. That’ll be the make-or-break point for me in replacing other envelope modules.

Someone from Xaoc confirmed on MW that they are strictly trigger inputs, with no sustain/looping, with “this is against the main concept.” It seems like a waste to me not to at least have predefined loop points. Now I’ve lost interest in this module.

There does appear to be the ability to establish loops on one of the menus, and the expander promises to provide CV control over more aspects of the module. I’m also curious if, having tweaked one of their stock envelopes into something you really like whether you can save it. Otherwise every trip is the first time.

This and other other new XAOC module won’t be about until early 2019 IMO so plenty of time for them to get feedback and fiddle with it.

Thank you for this response! And bonus points for the lovely formatting.

After watching you haul that large box around for an entire evening a week or so back in London, I’m hoping your display was successful.

It was great! Thanks again for the guided tour.