I saw your code for a filter ping in the Map Core topic, but I don’t know SC at all.

I’d enjoy learning how to make filter pings or a resonator as a sound.

With samples I’m definitely curious about degrading/disintegrating loops (I want to make a script around this, which is why I signed up for the class to learn SC). Not sure if that’s simple enough to go over in the time allotted.

Really looking forward to these classes and starting to learn something new!

sorry for slight ot, but i’ve been learning a ton from @yota’s youtube/github. will keep me busy until the workshops! 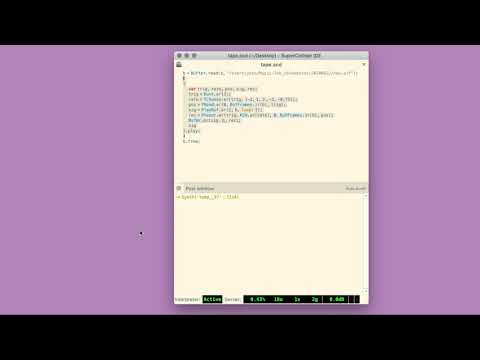 Super cool! Thanks for sharing this!

Re: specific synth sounds; I am very interested but have a hard time tracking down/wrapping my head around methods of phase distortion (Casio CZ style). If there is any way to cover this topic in the workshop I’d be overjoyed. Thanks again! Looking forward to both workshops.

yeah! I’m super excited about all these topics.

I’d enjoy learning how to make filter pings or a resonator as a sound.

I’m pretty sure I can incorporate both of these things

filter pings are surprisngly easy. degrading loops should be very fun too, there are lots of possibilities on how to do that…

sorry for slight ot, but i’ve been learning a ton from @yota’s youtube/github. will keep me busy until the workshops!

def not off-topic! very much on-topic in fact. I’m going to assume no SuperCollider experience, but if you do want to get a little head start, I totally agree @yota’s Youtube channel is full of great stuff. of course there is also Professor Eli Fieldsteel’s Youtube tutorials and Michelle McKenzie’s Youtube tutorials. but again, don’t fret if you don’t know anything prior to the workshop.

actually, full disclosure, aside from one or two of Eli’s youtube videos and a few of Michelle’s I’ve not done many SuperCollider tutorials or formal training…so this workshop will (likely) be different than other tutorials. its sort of a compilation of things-I-wish-I’d-known when I started tinkering with SuperCollider. and while its an exploration of SuperCollider I’m super intent on focusing in on a few objectives (drones / sample player) and pulling out what we need to get there.

I am very interested but have a hard time tracking down/wrapping my head around methods of phase distortion (Casio CZ style).

ooh this is cool! I afraid I don’t know about phase distortion…but I found this article in Wikipedia and it was pretty easy to take that example from the USPTO CZ-series patent application and port it into SuperCollider. check it out: 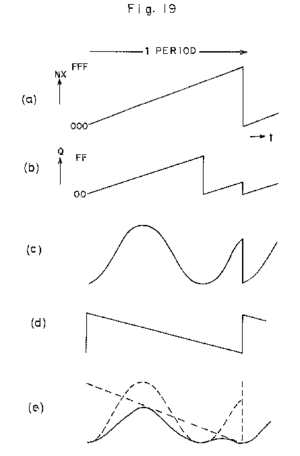 SuperCollider port (based on how it is described):

the above is just a little demostration too that if you have a detailed schematic of the synthesis you want to do, it can usually be done very easily (never thought about digging through old patents for synth designs, but hmm…). but of course, a lot of fun is to be had by randomly plugging things into things in SuperCollider and hearing what comes out!

those are so cool! reed instruments are a bit of a tricky one for me. there is physical modeling you can do in SuperCollider but I won’t be going over that. however, I think we can get close to this using some tricks that make it sound similar. a good place to start might be looking at other scripts that emulate reed instruments. I’ll have to look this over some more and try to think of some tricks

I’m all signed up for both! Can’t wait. Pretty psyched for learning how to integrate gens into Norns. There’s so much cool stuff out there that could be brought into Nornsland.

I’ve been sniffing at Supercollider for ages like an intrigued but nervous puppy … these sessions look like exactly the introduction I need, and with luck I should be freshly Shielded by then. (This also seems like a suitable occasion to finally post here after months of increasingly intense lurking. Hello.)

Hello and welcome! I hope you love it here.

welcome @samuel_wade! yeah this course is especially for you

its like my personal greatest hits of things I wish I’d known when I first got norns and started digging into SuperCollider.

@corpusjonsey, is there anything specific you’d like to learn about or just general integration into norns? if anyone still has suggestions, I"ll happily take them up until the day before the lesson lol.

as I’ve been preparing for the lesson I keep getting sidetracked and just now realized I could hook up one of the fancy hand gesturing things to SuperCollider and now I’ve got hand gestures working with my drones:

maybe this can be a bonus lesson at the end (its super easy to do!)

Hi @infinitedigits, thanks for asking: after those two workshops, it would be really great to have one focused on creating a sequencer!

I can’t think of anything specific. I’m sure just seeing the stuff you already have planned will be plenty to take in and give me ideas. Thanks so much for offering requests though!

A question to you guys and @infinitedigits …

Do you think it makes sense to register myself for the ws without having a norns? I am interested in norns but honestly I still don’t know if my coding skills justifies buying one
… maybe your ws could help me in this regard

maybe wait, register for the on demand archive of the class and buy a norns shield

Yes, @mheton. You definitely don’t need any programming skills to enjoy Norns - with the scripts that the community already created you will be good for years to come

And about the idea of doing an workshop without having the machine, well, I did an Arduino 5-day workshop some years ago without having one (and I still don’t have!) and I was super happy just to learn a little about electronics, computers and basic programming. Knowledge is always good, specially - in my opinion - when we study new languages.

it would be really great to have one focused on creating a sequencer!

yeah!! sequencers are a lot of fun. I am thinking actually to have us make a very simple sequencer in workshop 2 - basically using lattice to make a simple randomized quantized sequencer. I’ll make sure to budget some time for it! a more in-depth use-case might need to wait until later on. but a quick overview of lattice might show how easy it can be!

Do you think it makes sense to register myself for the ws without having a norns?

I’ll second @glia and @aeoner’s comment! basically: this class can still be fruitful for you if you don’t have a norns and want to learn SuperCollider. the first 90 minutes are totally “norns-free”, and you will learn stuff that you can do in SuperCollider on any computer. in the last 30 minutes I will demo how to bring stuff into norns, because norns is a always-on SuperCollider synth (one of many cool things about it).

I can’t think of anything specific. I’m sure just seeing the stuff you already have planned will be plenty to take in and give me ideas. Thanks so much for offering requests though!

don’t hesitate to let me know if you have other ideas!

Thank you guys for your encouraging input. I will register and I am very curious.

Regarding the second one, the one more sample focused, I would be interested in granular synthesis, if it’s possible and it fits into the level of the workshop.

Are still spaces? I won’t be able to do the payment until a few days…