the 4ms Row Power has a daisy chain jack and takes a similar range voltage to the monome switch. a simple jumper reduces your power brick count.

note that this still completely isolates your 5V system. it’s a great solution as the 4ms power brick is overpowered and will happily drive everything. 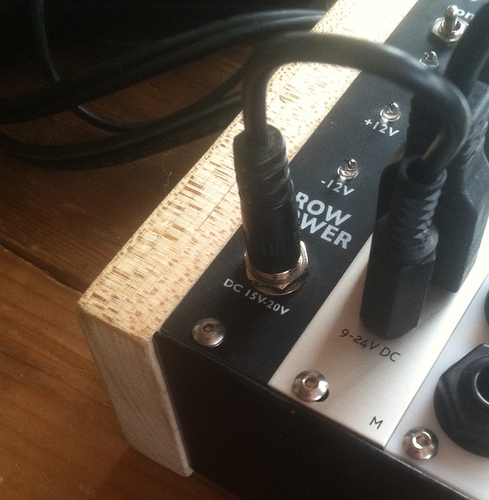 only downside is the 4ms power switch doesn’t deactivate power to SWITCH, so you need to pull the plug.

Neat! Been thinking about replacing my uZeus with a Row Power.

Can the PS supplied with Switch be used with a Row Power? Would be nice to save money on not having to purchase another power brick, assuming the Switch PS provides enough juice.

doesn’t the row power always come with the power brick?

i haven’t checked the current ratings between the two, but certainly the one that ships with the row power can provide more current. i’ll check.

depending on what the uZeus needs, you might be able to hack a cable together to share the DC input.

AH lists them separately, and CV says "Power Brick 90W are sold separately as well. "
Maybe Switch could be sold without the PS? Especially if the row power PS does have higher specs.

Actually thinking about it some more maybe I don’t even need Switch as row40 provides 1.5A for +5V, could be enough without using external power - edit: should probably specifically mention this will only be the case for the black version, row40, as the white row30 only provides 0.5a @ 5V

yes, it does provide enough power, but having highly variable 5v demand using the same ground-return paths as the 12V system isn’t ideal. in some situations it can make ADC/DACs fluctuate, though you probably won’t notice this much.

but, for my single row case, the row power works very well.

yeah, I’m thinking for a smaller setup specifically, like this one: https://www.modulargrid.net/e/racks/view/125863

can’t blame you! the man is a crazy genius.
took me 2 years to find dep2b, one of my favorite modules.
my modulargrid plan is out of date too, there are also 2 gieskes vu-percs now.

Its a neat idea to use the Row power jumper for the Switch. Is it possible to connect power into Switch from the rear? I’m thinking a case with all the power cables coming in from the back would be nice.

you could hard solder an external jack and route it internally. i’ve considered doing this with my other case.

so stoked. tonight all my monome modules and power supplies arrived plus a mangrove and inteli unity mixer. awaiting ginko sampleslicer and already racked was phonogene optomix and function. not so strong in standalone category but depending on how much control i can render from ww+es+switch and my trusty 128…

i want to hear it too but no time yet.

Probably a silly question, but what do you mean by “jumper reduces your power brick count”? How do I do this? I’m new to modular. Thanks

i made a barrel-barrel connector so that only one capably-powered brick plugs into both the euro 40ms power and the switch power-- shown in the photo at the top!

Ah okay, thanks. I thought maybe you did something to the power supply itself.

Anyone try this with the Row Power 30 instead/as well? I’m guessing both the row power 30 and 40 use the same power brick - so if I’m not mistaken, shouldn’t this work with that as well despite the lower 5v ability of the row power module itself?