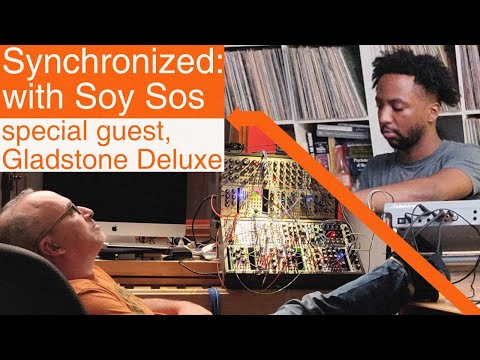 For over a year, I’ve been getting together with Richard from Pittsburgh Modular
in the midst of the great pandemic and doing a thing loosely constructed as Modular Clock Experiments.
Tonight was the first run of a new series called - Synchronized: with Soy Sos
Please have a look and let me know what you think. There were of course, a few technical difficulties,
but we overcame. We started off with a great guest, Gladstone Deluxe and I have an amazing group of friends that have already said yes, plus we have plans to do this live with a great presenting partner.
Of course Richard Nicol will always be a most beloved guest.

Join Soy Sos and musical guests for an intimate, immersive sound experience with modular synths, electronics, and a mix of traditional instruments! Using synchronization-based stratagies, Soy Sos collaborates with contemporary sound artists to create live, improvised sound-scapes. Performances are bookended with informal discussions focusing on the guest’s origins in music, chosen performance setup, current/upcoming projects and the approach for the episode’s jam. Tune in live, join the chat or catch up later on the archive. Gladstone Deluxe is a classically trained percussionist who has performed as a soloist at the Kennedy Center, a Producer/DJ with multiple works charted in the Beatport Top 10, a technical audio engineer at Facebook Reality Labs, and a sound artist creating interactive installations that combine spatial audio, motion and reactive electronic soundscapes. Gladstone was born and raised in DC, and is currently based in Pittsburgh.⁠ (Although he’s about to move) Gladstone Deluxe Links: Spotifyy: https://open.spotify.com/artist/3bUaT… Soundcloud: https://soundcloud.com/gladstonedeluxe Facebook: https://www.facebook.com/gladstonedel… Herman “Soy Sos” Pearl - http://www.tuffsoundrecording.com/ Pittsburgh Modular Synthesizers - https://pittsburghmodular.com/

For some reason the image in the link keeps coming up wrong, it should be Gladstone Deluxe and I. Please have a look and share your thoughts. I’d love to know what the lines community thinks about this. We have plans of expanding on this within our organization.

Hey Herman! Very cool stuff. Watched some bits of it, although I don’t have enough time to watch the whole thing. Maybe adding a few markers would help those who want to skim through.

Something to put out there, I think there is a lot of interest in Michael Johnsen’s circuits and the small boxes he networks together during performances. It’d be great to see him use and discuss a few.

I managed to catch this towards the end. I’ll probably check the rest out later, but I really enjoyed the part that I did catch. I appreciate how he was able to change drums sounds and patterns on the fly and still manage to always sound good. I imagine having the classical percussion background certainly helps in that case. Also thanks for setting up all the cameras so we could see the performance from multiple angles!

Thanks, we were actually sharing drum duties. Sometimes I was doing a kick and noise/hat while Gladstone was doing a snare and synth thing. My set up is mostly geared towards percussion.

Thanks Jonny, it’s an interesting idea altho the focus of this show format is artists sharing sync and improvising and I don’t think Michael ever has done anything like that. It’s funny, I’ve known him for maybe 25 years and might have introduced him to Richard with the idea of him designing some super crazy modules for Pitt Mod. What I didn’t know was how good of a circuit designer he is, really one of the best anywhere.