I thought it’d be cool to open a discussion about different things people do to get different sounds and timbres out of their guitar, especially in a tabletop setting a la Keith Rowe.

I’ve found that having some sort of thin object between the strings in the bridge (in my case, usually a butter knife) to be really cool. Since it’s weighted, you can get some great sounds from having it bounce up and down.

I have the Passarelle bridge from Atelier Rosenkrantz/Kaki King. It’s great fun, but I haven’t had enough time to play with it yet. Maybe not in the spirit of Keith Rowe, but it transforms a standard guitar into a twelve note instrument with new timbral possibilites.
Kaki King - Bowen Island (Using Passerelle) - YouTube

Not tabletop but as a big Gong fan, I often use a long screwdriver shaft to do the “glissando” guitar that Daevid Allen and Steve Hillage were masters of…

But the butter knife is always good fun!

And slides, metal and glass, and an ebow…

Takes a bit of fiddling but pieces of folded paper around the strings can get some really lovely sitar-like buzz.

I’ve heard about this! It’s a great idea.

You mean like using the shaft as a slide? Also, I loved that Gong piece you shared a few days ago, great stuff!

Takes a bit of fiddling but pieces of folded paper around the strings can get some really lovely sitar-like buzz.

You mean like using the shaft as a slide? Also, I loved that Gong piece you shared a few days ago, great stuff!

Thanks! Great band! I use the screwdriver shaft as a combination slide and bow…

Wherever works! It’s a balance of buzzing vs sustain so it takes some experimentation in placement and type/weight of paper.

A few years ago I commissioned a solo guitar piece from a former student of mine; he called for a sawari type of sound (after Takemitsu’s description of that characteristic of many traditional Japanese instruments). What we ended up using was light thermal paper (like the one used for receipts), a strip about 1" wide with a cut running almost all the way down the middle, and then weaving each of the “legs” alternating around each string. It sounded best placed very close to the bridge, and some care had to be taken so that the high strings wouldn’t be muted completely. He also added a “buzzing” resonator using a chain of paper clips held together with a small binder clip and a rubber-band. 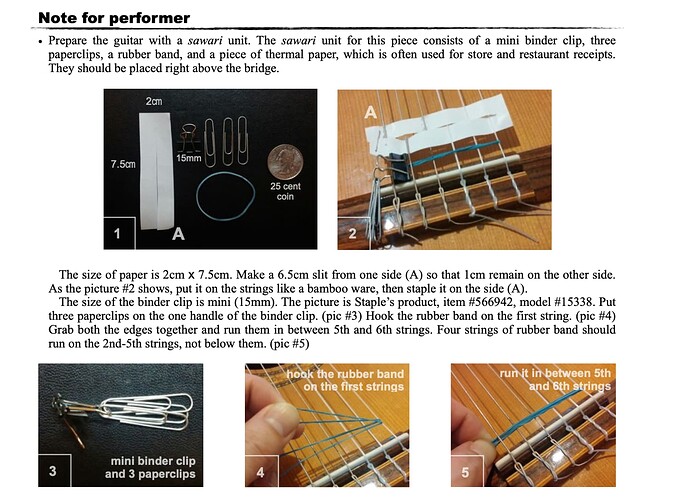 It’s a lovely, buzzy sound, still maintaining the pitched identity of open and fretted strings (so not inharmonic like most prepared guitar results). You can hear it here if interested:

For me I love using a resonator as a prepared instrument. It’s got strings behind the bridge like a fender offset, the body is metal so I don’t have to worry about scratches and the whole body is one big amplifier. 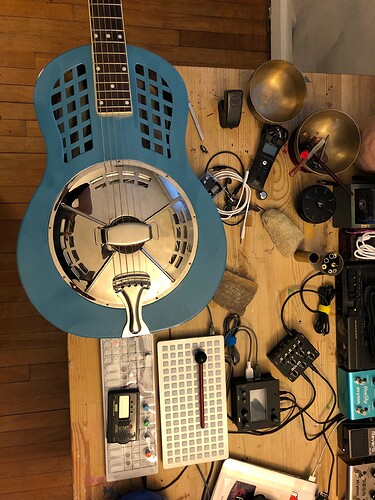 That piece is gorgeous! And thanks for including instructions, too!

Not table top but… 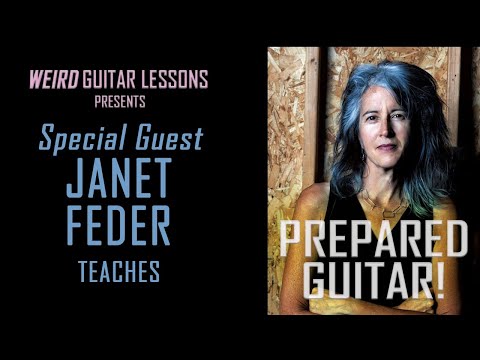 Before getting into modular synths, when I actually played guitar a lot more, lol, I spent a bunch of time with prepared guitar. Some of my favorite sounds were a little mini screwdriver near the pickups, intertwined in the strings, creates a nice naturee a l ring mod sound. Also, that little metal chain that hangs from a light fixture is great for dragging across pickups. Also, metal scouring pads are nice for static white noise textures on the pickups. I also like using a piece of foam right in front of the bride for thumb piano type tones. Lastly, that little metal tool for hammering in small nail heads in nice because it has a grated sides for bowing type sounds.

Can’t wait to try these!

Nice Noise: Preparations and Modifications for GuitarBook by Bart Hopkin and...

This is a book of book modifications, preparations and extensions you can use with acoustic and electric guitars. The focus is not on electronic effects; it’s on things you can do physically to alter the ways the strings vibrate or the soundboard...

This looks fantastic, thanks so much for sharing!

No matter how old or played out the technique is, I’m still a fan of small alligator clips on strings. Especially if you find nice clip positions where a plucked string takes on some frequency modulation kinds of effects.

This is my ‘toolkit’ of prepared stuff, some of which I’ve carried around with me to every show for I’ve played for maybe the last 20 years, even if it’s a rock show I’d sometimes pull it out just to make people annoyed with some dissonance during a solo. Lol.

Thanks for the tip! I’ve also seen you rubbing something on the upper strings of your guitar? Is that just a small bow or something?