What does it do? What’s the little USB drive looking part for? So many questions that will be answered soon!

This is what Teenage Engineering drops (or maybe it’s a hoax):

A little more info at the bottom of the page here – https://www.teenageengineering.com/products/op-z

this is why i stopped tracking namm

i’m such a shallow person…
how can i want something like this just because its gorgeous? 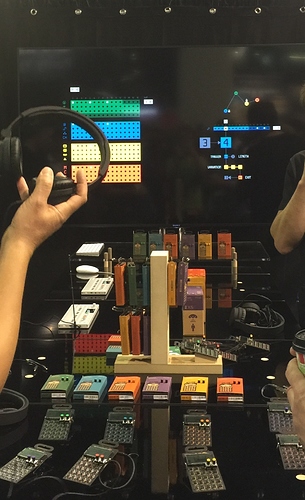 Interface looks cool. They didn’t have it out when i stopped by but i was able to get a few details:

Is that new pocket operators in the picture?

thank you so much

that’s exactly what i needed to see

Been thinking about this. The visual stuff seems interesting, as does the sequencer. I wonder if track 4 “sampler” is limited to recording internal sounds or if there will be a line-in jack?

over on https://www.teenageengineering.com/products/op-z there seems to be a microphone at least, if not a dedicated line-in jack. but there are a few other ports on it which might serve a dual purpose? plus there’s a few connections on the back which i think they never officially announced?

Yes, they’re launching a couple new ones jan 27th at a local event here in SE, from what I’ve heard.

This is the “app synth” with a Blackfin, right?

wait, “a couple new ones”… you’re talking about pocket operators, right? not the op-z?

Just curious, what sorts of impressions do folks have of the OP-Z concept? My instinctive reaction to the “bring your own screen” idea is that I don’t personally like it, and it is somewhat concerning with regard to future obsolescence.

I’ve quietly wished for a physically expanded OP-1 (maybe a full size 37 key with expanded I/O, sort of as a quirky hub/sequencer/main device) whereas it seems TE is going the other way…though I guess it is cheaper.

fully agree. would love to see them go all in with a flagship kinda thing. real audio jacks and tons of power/options.
all there stuff is amazing… would just love TE’s take on the MPC live… haha
it’d be like $11,000 but thats ok…

I’m actually most excited about the Unity integration.

I’ve been doing a bunch of weirdo VR projects controlling Unity with OSC from Max, so to see some sort of consumer product meant to control Unity, etc via the interface of step sequencer seems like, super niche but incredibly cool + useful for new mediums & methodologies (i hope!)

last year i spoke with a fellow from TE and he said that the design of the op-z is intended to be fully intuitive and functional without a display. the wireless screen/app/unity connectivity was referred to as a “bonus” and “nice way to learn how it works” but not essential to making music.

seems like a clever way to build something that is a step up from the pocket operators, but not as pricey as the op-1.