Yes, we want the barn jamz.

these field recordings are nothing short of miraculous. eerily familiar & buzzing with energy, satisfyingly unprocessed. the perfect imprints of your world / existence ! 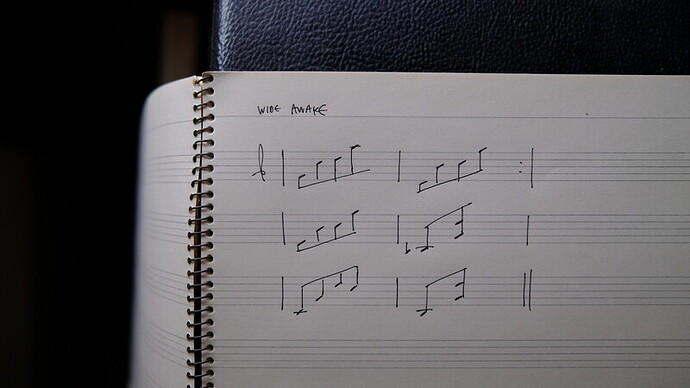 (when you don’t write notation for a long time, this is how the treble clef looks i guess… maybe we should have a “sloppy scores” thread)

Sloppy scores thread is finally a “clever western white people music” thread I could participate in! This is clean and precise compared to what I have in my notebooks. I think I’m at peak messy score when I write the lines by myself because I can’t find the book with scoring lines fast enough.

i recorded a variation of wide awake for this piece by kyle driggs and sean blue (who i met originally through @instantjuggler on an epic iceland tour).

most of my music starts off as improvisation— this one was first played at expo74 at mass moca, where the timing was much more loose and featured quite a bit more feedback and mlr splatter.

to accompany the film i had to work out a lot of timing and loose synchronization with gestures— something i hadn’t done so much in the past. there’s a balance between landing/matching an audio cue with a visual moment and just letting it be a layer itself.

i cut the second half for the album.

loved the variation for the open space stream too !! took us a couple listens to realize - we’ve got a few short clips of it though

wide awake sounds like the fresh start we probably all need. Love that track!
It’s funny how sometimes the kind of feel/imagry that a certain music creates in one’s mind is so strong and defined that when you then see it in a video it feels like somebody put it on the wrong pictures. Simply because any picture but the ones in your head would be the wrong ones.

i know that feeling, absolutely.

the sounds of wide awake almost never actually make me think of this video— the combination of the two is a separate entity of its own.

Fun fact- the rings in that video are cut from a single sheet of plastic and then hand polished for 40 hours each in Japan! For some reason this came to mind while watching the film… maybe it’s that the music feels equally hand crafted and yet high quality. Hard to describe but I really appreciated the “soundtrackness” of the music, a very appropriate balance between following exactly but also taking its own space.