i know the topic has already been mentioned more than once in this community, but i thought i would try and give it some more space to be discussed.

i’m on the verge of buying a TT and i’m envisioning all the possibilities that could be unfolded by having a beatstep pro sequencing its trigger inputs (not to mention the possibility to share clock duties between modular and midi controlled gear).
i read somewhere that beatstep pro sends a +10v signal through its drum gates, which seems like a lot to me, even though i’ve seen people using it with eurorack smoothly.

could the 10v signal be an issue for TT script triggering? is it possible to somehow adjust the incoming voltage from the TT itself?
and most importantly: does anyone here own both beatstep and TT and has ever tried to patch 'em together?

i’d really much appreciate any help. thanks!

I asked the same question in the Workflow thread, but didn’t get a very definitive answer. My concern was that the BSP triggers were initially making a very audible click through my Just Friends, but that seems to have stopped for some mysterious reason. I also tried emailing Monome directly and Brian’s reply was:

“In short, I’m not sure. The circuit is protected so I’m confident TT wouldn’t suffer. I’ve used a Keystep clock output to clock an Ansible (it worked fine, no audible effect). I’m sorry I can’t offer more.”

I have a TT on the way, but as I’m inexperienced with code and short on time, it might be a bit before I can address our mutual concern. Hopefully someone else here has an answer, but if not, I’ll try to remember to come back.

awesome!
sounds great.
i actually think it would work, from a purely theorical point of view.
i hope the experiment works out fine!
keep us updated!

you could use an attenuator cable to reduce the signal level?

but attenuator cables are quite costly, i’d rather not use them if not strictly necessary

still think it’s pretty weird that a hardware sequencer with cv compatibility has such a high gate voltage. i can’t see why arturia would have made such a choice.

Other Eurorack modules also uses 10v, for example the gate outputs on Make Noise Maths or Function are also 10v. I think Arturia probably used 10v rather than 5v to be compatible with the greatest amount of gear (since 5v isn’t enough to trigger some things).

You could also use a VCA if you have one of those in your modular system to reduce the level of the Beatstep Pro triggers.

Attenuators are really useful utility modules though and well worth having

You can DIY passive ones very cheaply: 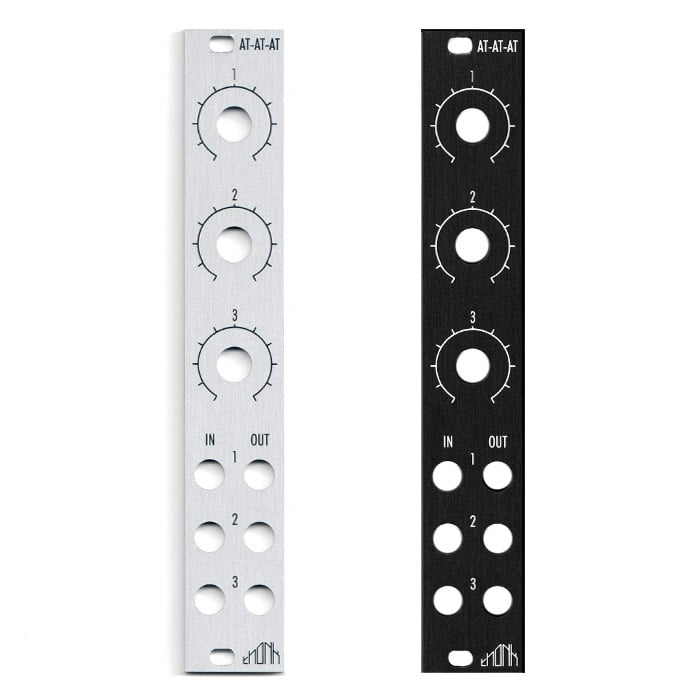 Price does not include EU VAT

or there are ready built options, for example:

this could be slightly off topic, but i was also wondering: could a gate from BSpro trigger one of the outputs of a PNW via cv-input instead?
PNW has a internal attenuator, so that should work, theoretically.
the case scenario i’m envisioning could be BSpro sending a pitch CV to an oscillator while triggering PNW to fire an envelope to a VCA on the same step.
crazy stuff?

does anyone here own both beatstep and TT and has ever tried to patch 'em together?

So, I have both a BSP and recently acquired a TT, so thought I’d try this. My initial experiment was very simple. Two drum triggers out of the BSP connected to trigger 1 and 2 inputs on the TT.

I simply replicated the incoming trigger from the BSP to the corresponding trigger outs on the TT. I used one of the TT physical outs to trigger a sound on an Intellijel shapeshifter in perc mode. For both of the scripts, I also sent an i2c signal to the ER-301 sound computer to trigger a drum sample.

From this basic experiment, so far I can say that the BSP’s 10V output didn’t seem to cause an issue. It seemed to trigger TT reliably, and I didn’t notice any extra click or anything (granted these triggers were all going to digital modules).

Not sure if you are still interested in this or have already made the purchase. Any other experiments you’d like to have done?

For what it’s worth, my Beatstep Pro hasn’t caused any problems with any of my modules, despite its high voltage. I haven’t gotten clicks when running it into Just Friends. The only issues for me have been occasional weirdness (skipped triggers) when using Stackcables on the gates, and struggles getting an MS-20 mini to recognize its S-trigs (which is irrelevant for Eurorack).

I would say, same here. My euro system is not huge - maybe ~20 modules, but so far I really haven’t found anything (Euro or other MIDI gear) that I can’t make the Beatstep Pro work with. Arturia seems to have thought it through pretty well, and continue to support it with firmware updates.

With the newer BSP firmware (>2.0+) each of the 8 drum gates can have it’s own sequence length, so you can get some really interesting polyrhythms/polymeters out of it, and can change them in a very easy/tactile way. I think the BSP is going to go very well with the TT.

I meant to get back to this thread a while ago, but life, etc. Anyway, seconded on all this information except I’m using mostly analogue modules, as well Just Typing some stuff, and it still works fine for me too.