Copy and paste would be cool, but when learning code I find that typing it out really helps to understand it. I often skim a piece of example code, trying to understand the thought process and flow. Then I try to recreate taking my understanding of what was written, and trying to recreate the process. If I get stumped on syntax, I see how far I can get without referring back to the code.
Once I get it working, I go back and start exploring.mapping out my own tangents and trying to follow those trajectories. Often they fail, but sometimes you find magic in meandering.

I agree %100 that having to type the code is the best way to learn. Even if it means just re-typing something from an example. With Teletype code re-typing is super easy, since the lines are so short and each script is no more than 6 lines!

So, does anyone have any tidbits to share?
Something that you coded in Teletype that was especially satisfying?

Great thread, but i am still waiting for my teletype !

although that doesn’t really address the posting of a full scene.

I agree that typing code in is useful, also fun. It also matches the memorylessness of modular generally.

Here’s a question: if two scripts each set P.N to different values and call P.NEXT, what happens if the scripts are triggered at the same time? Does P.NEXT reliably increment and read the right P? (I see that the Reich scene @laborcamp posted does this, or might do this.)

Good question about declaring two different patterns and possible confusion.
I have not noticed any problems with this. I think if you call P.N right before the P.NEXT in the same script, it should not get confused with other patterns called in different scripts. I would be curious to hear from @tehn about the order in which commands/scripts are executed. But if the scripts are executed “as a whole” then there should not be issues…

I think the reality is that nothing truly happens ‘at the same time’ in the processor. Everything is processed sequentially (though there could be some strange race conditions). A whole script will be performed before another script is run, so if this happens inside a single script then it should be quite reliable.

If you’re triggering multiple scripts, it will likely depend on the source that is sending the triggers.

i might’ve asked this before but can’t remember - what if there are delays in a script? would it delay everything else until all of the delayed commands have been executed?

say you have this: 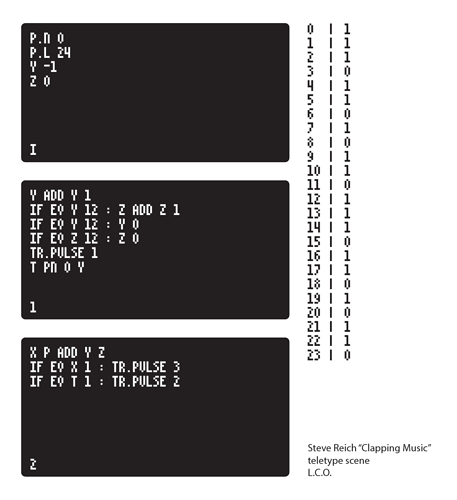 This is my second take on the Steve Reich “Clapping Music” rendition as a scene in Teletype.
I thought that I could post it as a form of “tutorial” explaining each component of the scene, which consists of only 3 scripts, and one pattern.

PATTERN:
I set up the pattern as 24 steps, which is an equivalent of two identical bars from the “Clapping Music” (see here: http://www.music.mcgill.ca/~gary/306/week10/clapping.pdf ) You will see that steps 0-11 are the same as steps 12-23. I set this up this way so that I can use the same pattern for the two sequences that constitute the composition. (Short explanation of the structure of the piece is that one sequence repeats the same bar consistently, while the other shifts forward by one step until it reaches the full cycle of 12 shifts and begins to play the same sequence as sequence 1, and the cycle begins again. Here is a visual representation of the two cycling patterns as two rotating discs: https://upload.wikimedia.org/wikipedia/commons/0/07/Steve_Reich_-_Clapping_Music_visualization_disks.png )

SCRIPT I:
This is the “Initializing” script that is automatically executed when the scene is loaded. essentially set up as a “starting point” or a kind of reset for the piece. This can be manually executed by pressing the “widows” + I on the keyboard at any time to restart the piece.

SCRIPT 1:
Most of what happens in this script is two counters (Y and Z) that are advancing the steps in the two sequences.

Y ADD Y 1 — using the ADD arithmetic operator it simply adds 1 to whatever the current Y count is, each time this script is executed, which is every time it receives the external clock trigger on INPUT 1.
IF EQ Y 12 : Z ADD Z 1 — an IF modifier checks whether the Y count had reached number 12, and IF it did, it advances the count of variable Z by adding 1 to it’s current count. So, each time a complete sequence of 12 steps is counted on Y, it advances Z by 1.
IF EQ Y 12 : Y 0 — and, when the count of Y reaches 12, it also resets Y back to 0.
IF EQ Z 12 : Z 0 — and the same for variable Z: if it reaches 12, it is reset back to 0.
TR.PULSE 1 — sends a pulse out of trigger OUTPUT 1 which is connected (self-patched) to INPUT 2 on teletype. (This is basically my way of extending this script beyond the 6 lines limit. The content of SCRPT 2 could have easily been sitting in SCRIPT 1.)
T PN 0 Y — sets up variable T which is set to either a 1 or a 0. Using the PN command, it looks at pattern 0, and checks the index position Y (which is a continuous count from 0 to 11).

Hopefully this will be helpful to someone here.
If you have any questions, please don’t hesitate to ask.

Awesome ! Thank you so much. Commented lines of code is perfect to learn.

a DEL command puts the line into a queue immediately and then continues on. it does not hold up the processor/etc.

Very nice initiative, could also be cool to see short utility scripts with description and commentary on each lines ( see laborcamp post above )

thanks tehn, i was hoping this was the case. should make for more interesting cross script pollination…

I was wondering if anyone got any idea how i could combine DEL and PROB functions ( i tried combining PRE functions but it doesn’t seen to be possible ). Let’s say i would like to set a Probability of Delaying a trigger ( and, bonus, also add the probability of playing this trigger … ). Any thoughts ???

Not a perfect solution, but use the DEL to TR.PULSE and patch this into another input on TT where you plać the PROB command.
In other words chain two scripts, and self-patch TT.

Yep, thit is my actual solution, i just wonder if such thing is manageable in one only script.

Awesome! Something to work with…

i have a few questions. (i don’t want to make a lot of new topics, so, sorry if this is not the appropriate place)

answers to the first three questions:

– yes: single Metro
– Metro executes the script that you put in the M screen
– I screen is for setting I-nitializing values, and anything else you want to execute as you load your scene. You can also execute that manually, by pressing the CTRL+I keys