yea copying a script seems like it would be sufficient

I think it’s 30 characters per line, but will check on my device this evening

hello, i have some super newbie Questions.
How does one access the M screen?
I have an M icon on the Teletype, and M.ACt 1 will illuminate it but scrolling through the pages does not seem to land me on an M screen.

I am starting my teletype study this weekend, and i am just trying to get comfy with the constraints of this

the bracket keys will rotate you through scripts 1-8 and i and m (init and metro) in a round cycle. just keep hitting the bracket keys (be sure you’re in script mode, hit tab)

Back to watching the Teletype studies

This is really great, did this format catch on?
LOVE IT! 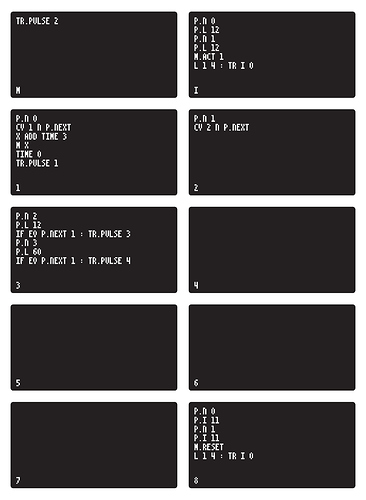 So I had been trying to keep myself from getting a Batumi by programming my own - and I pretty much figured it out. The key was realizing I don’t have to reset TIME every time I reset an LFO, so that I can have 4 (with ansible… 8?!) LFOs going at once, at different rates. All triangle waves right now - I’m hoping to switch PARAM to change the wave shape - any ideas?

Also I’m thinking of not averaging the last two triggers to save on variables (so I can add 4 more for Ansible) since that will also free up a line to make more complicated shapes.

What would you guys add? How should I make use of IN or the Ansible inputs?

But… Batumi frees up Teletype for other duties…

Haha, resistance is futile…
I’ve been trying to develop several simple utility scenes for Teletype to use when I’m improvising with my band (and don’t have the keyboard plugged in).
Right now it’s just a quad LFO scene and a sample-and-hold / random gate length scene. I should post the code for the latter sometime this week

Ooh could you indeed post? I was messing with your LFO script from a different thread last night. No innovations on my end, I was just trying (unsuccessfully) to program an envelope and stumbled on your lfo. Would be cool to take a peek at your scripts.

Where are we at in terms of finding ways to quantize TT’s cv in to a major/minor scale? I saw people mentioning that in different threads around the forum, but it doesn’t seem like anyone has cracked it yet. Or have they?

my quantize technique consists of entering scales into tracker patterns while setting cv outs to read from said patterns. modulations (either internal or external via PARAM or IN) then move the tracker playhead around.

learned this approach from teletype studies #7, in the section titled tuning patterns

for fellow earthsea folks, launch a random pattern via param knob. could easily be modified to accept incoming trigs. but:

this isn’t quite working, as i can’t make the knob factor into it. ideally, at any time if you twist the knob all the way left, playback stops. twist it all the way right, or over a certain non-zero threshold, and a random pattern (1 of 4) plays.

. . . any ideas you have on getting the knob to work would be most welcome! right now the script works in live mode, minus the if/else bits. this is my first script; i’ve only had earthsea for a day.

doesn’t make any difference. the param knob seems to be entirely ignored.

but you are triggering the script?

no, it doesn’t get triggered. at least, earthsea doesn’t do anything. this is the only bit that works, and only in live mode (as it requires typing and executing each line rather than waiting for an event):

that will launch the pattern number determined by RRAND; re-run to get another random value for Y. is the problem with waiting for knob changes, or with getting earthsea to run?

I mean does script 1 get triggered? anything in tt just happens when a script gets triggered. being it 1-8 from trigger input or manually, M periodically or I on startup.

maybe try putting SCRIPT 1 in the M script and adjust M to something very small?

i didn’t realize that’s how the script numbering works, corresponding to the inputs. i tried putting it in I, and that allows me to manually launch it at any time with Win-I–with the expected stop/start results if PARAM is zero or not. but the script doesn’t run on its own.

setting M to a small value (5) and moving the script to it results in earthsea freaking out as it attempts to launch random scripts but is immediately stopped by TT, because param is zero. that doesn’t keep earthsea’s playhead from lighting and dimming, though. turning param past 0 results in crazy earthsea pattern launch speed, LEDs flickering wildly. TT doesn’t seem care about ES recorded playback time. it’s sending an unending stream of start messages.

what you’re trying to do will require a bit more plumbing. here it is in psuedo-code:

so your script needs to know what happened on the last read. right now it’s probably just flooding ES with random pattern calls or doing nothing, as you describe.

ahh, a couple of the linking bits that hadn’t occurred to me–using metro, and what may turn out to be reading/manipulating the stack. it’s further ahead than where i’m at in the TT lessons, but you’ve got me thinking about some ideas already. i’ll check back in with my progress. thanks!