I only very recently got a TT and JF. Really intrigued by GA but alas, I don’t have a second JF or a W/.

Would it be possible to modify it for 1 JF by allocating 3 or 4 JF voices to the Chord side and the remaining voices to the harmony side?

Edit: Sorry, that’s not a request but more of a general pondering as I try to get my head around the TT/JF relationship and possibilities.

Hi, I procrastinated this release for quite a long time, you know life etc. but here is Gentle Antagonism v1.1!
it now “only” require 1x Just friends + 1x W/Synth to work efficiently. I realised that very few people own two JFs so the script was quite prohibitive.
Also: I removed the random multiplier on the metro because I felt that was disturbing when playing live and added a nice visual feedback for the loopers activity. the interface remains unaltered.

(note that the Antagonist has to be on for the looper to work)
The antagonist works as before, playing 4 notes on the keyboard every now and then. 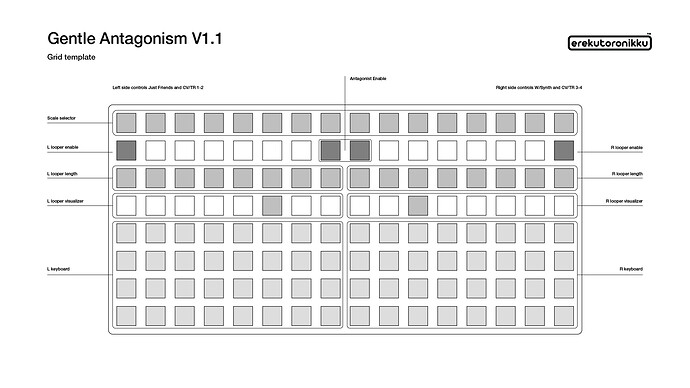 Inspired by your trigger sequencer to adapt it into an alternative version that drops p-locking in favor of some randomization control and euclidean rhythm generation. FYI this version does not have controls for the model, you’ll need to set that directly on the EX.

PARAM controls tempo, and Script 4 is a reset. I’ve also added a clock pulse on TR 1.
Grid Setup as Follows:

Upper 4 rows are just a visualizer for the trigger patterns on voices 1-4.
Bottom row is a series of 16 buttons in groups of 4, for 4 “control pages” for each voice. Holding a button down will show 3 faders. Each page has the following controls (below description is buttons left to right, faders top to bottom)
1: Euclidean length, euclidean fill, pattern rotation (1-16). Setting length to 1 will mute the voice entirely.
2: Timbre, Color, randomization (all 0-1023). Randomization is bipolar around the “center” set by the other two controls and works on both simultaneously.
2: AR Rise, AR Fall, randomization (0-15). Randomization is bipolar and works only on AR Fall. Note the Init script automatically enables AR VCA.
3: Octave, note (in semitones), AR envelope FM (0-15). A good place to start when setting up.

All values are kept in the pattern page in case you want to save a preset.

very nice - and great to see the concepts modded or serving as inspiration, that was exactly the goal!

@scanner_darkly Hey! I was wondering if the tilt osc messages sent by one of the older grid models has ever been implemented in teletype grid ops or code? Is there a way i can DIY getting tilt x/y messages from an old grid into teletype?

should be doable in theory but not currently supported. not sure it would be super useful with teletype since you’d need to do something like polling for values from a super fast metro in order to get higher precision.