Let’s give teletype its own voice with this totally ridiculous teletype drone haiku! I was hoping to be able to play with this at the teletype live coding event but sadly can’t make it, so here it is for your own fun.

Just mix the four trigger outs as if they were audio. I strongly recommend putting them into a filter first and then oodles of reverb for dronetastic enjoyment.

Now you can get rid of all those oscillators in your rack that are taking up valuable HP :-).

This is with teletype as the only “voice” through blades into mimeophon and FX AID:

EDIT: you may find you get different tones out of teletype depending on which screen is showing. It’s part of its charm, I feel. You can also do this with CV outs instead of triggers in order to control the volume of each part of the drone voice, but then it isn’t a haiku. Have fun trying to make it track volts per octave

is it meant to be L 1 4? unless you use ansible as a teletype expander in which case you can address 8 CV outputs with CV x.

I’d say L 1 5 is an optimal starting point as it leaves one “cycle” of the loop out, and allows for the voltage values to dim a bit before the “cycle back” to the beginning. I hope it makes sense, it’s easier to see the effect in practice. Changing it to L 1 4 makes it a shorter cycle and the movement isn’t as gentle, but it still works. Funnily enough an L 1 6 makes the pattern stop, not sure why, the whole thing works in the same optical illusion way that car wheels can seem to go backwards while you’re on the road, some values make the pattern move backwards, so maybe L 1 6 makes it stop.

Good point! Will try it out, seems like a fun thing to try.

that’s because there are 6 possible values for O with your O settings, so a loop with 6 iterations will result in O having the same value at the end of the loop as it did before the loop.

Lil simple Haiku Jam that centers on a nice chord (arp) progession being switched a d with a bit of logic for octave jumps.

A single jf voice incrementally switches between 4 patterns of arps-- C, Eb G & Dm7. random seeded logic of the same incremental number determins whether the sequence will be transposed up by up to 3 octaves. 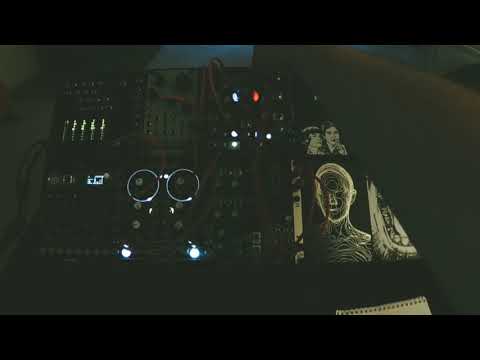 I’ve recently crafted a little Teletype poem I call the “Brain Age Theme Arpeggioid Generator” to learn how to use the Stack properly.

What this does is simple: quietly generate 16 stack commands to drive a voice, drop them all like a payload, rinse and repeat. Kinda like the speed-dial sounding arpeggio in the Brain Age theme, you know the one.

The second I tried the Studies out I instantly fell in love with Teletype and I’ve been slowly working my way to unlock its maximum potential. It really does have no limits as far as I’ve been able to toy with it.

I’ve designed a small 4-verse haiku that’ll turn one of TT’s CV outs into a “Skewable Envelope Generator” (a la 4ms PEG) with some super-fast slewing.

The working of this little script is as follows: First, set PARAM's max value to an envelope length given by Z and make two inversely-related values from PARAM to be used as attack/decay times on X and Y (if one goes up, the other goes down). After this is done, set slew times to the attack/decay rates and switch voltages on/off on time.

This can be a really handy “oh s*** I need an envelope” kinda thing if you have the CV out to spare. You can delete the first line, set Z to a number and X to another number between 0 and the former if you don’t really want to use PARAM. Or h***, go crazy and use IN! The sky’s the limit on this script if you understand it.

I don’t have a hardware version yet but I’m about to fix that next week by DIY-ing a Terminal.
I would never have fallen in love with this thing if it weren’t for the VCV rack plugin and all the awesome youtube videos and threads on Lines! Can’t wait to
try it with my hardware setup.

This script is kinda inspired by the sounds of standing in a grocery store and hearing all of the barcode scanners beeping in random-ish order but I decided to make it a bit more melodic with a Major 7th chord.
Nothing fancy, just really basic random notes quantized and random triggering of gates.

And here’s the code:

There’s this thing I like to do on Teletype that is clocking scripts with M set on a tempo (like a multiple of 120 BPM, for example), then multiplying that speed via probability and stuff.

This, while it creates some cool ratcheting and funky grooves, you can’t output anything steady off it due to master tempo manipulation. This problem would arise when using up a trigger output for clocking other things like delays and stuff (which is the driving force behind this haiku).

So, while we’re on the topic of clocking delays, some time ago I was doing something similar to this and tried to clock a Chronoblob 2. Needless to say, it was all over the place, so it called for an unsteady groove from a steady one.

In the grand scheme of things, this is dastardly simple: every X times, change X and do stuff, not much else to it. But, my mind exploded. I could keep the groovy clocking within Teletype and have a typical clock keeping other things in steady check within a patch. I managed to have my cake and eat it too in terms of generative scripting and delay clocking. It was a revelation to me.

I bring this silly simple little stupid verse here to appreciate how simple things in programming can be so effective, and at times, even mind-expanding.

you will need to use vcvrack teletype to run it (as the vcvrack version can process inputs and outputs at audio rates). trigger script 2 using a square wave from an oscillator running at 8k and make sure to remove the DC offset with a high pass filter:

Plaits into Scan & Pan into Beads, with Mob of Emus adding modulation and Branches controlling the Seed; CV 2 is used to adjust Level.

(fingers crossed on the formatting)

The pattern should be filled with scale degrees, which control the chord sequence (here on the dorian mode in C). For this video, I used: 1, 5, 6, 3, 4, 1, 4, 5 (which I think is the Pachelbel Canon sequence. Maybe.). I’m feeding the two CVs to the wing pinger. The bass voice is self oscillating with maximum resonance, the higher arpeggio is also being pinged with the short trigger pulse into its audio input. This should work with any pair of low pass filters, but the wing pinger is beautifully easy to control hands on (and here I’m transposing octaves on the fly using the touch keyboard).

EDIT: whoops… I didn’t realise the scale degrees counted from zero, which explains why this chord sequence sounds so random. Doh! I put it down to a hangover from the night before

this gives you four 1-knob, 16-step rhythm generators. it steps through the bits of a number (txi knob) and triggers if the bit is 1. really interesting sound… it tends to have breaks and clusters, like the opposite of a euclidean rhythm
you can replace TI.PRM I with any number.

A double first time. My first Three Module Challenge, and also my first Teletype Haiku. Thanks to @scanner_darkly and @CiDE for helping me condensing my idea to 6 lines.

(I’ve just realized while typing this, that I forgot to change the TR.TIME 1, since I’m using TR 3 instead. Whoops) 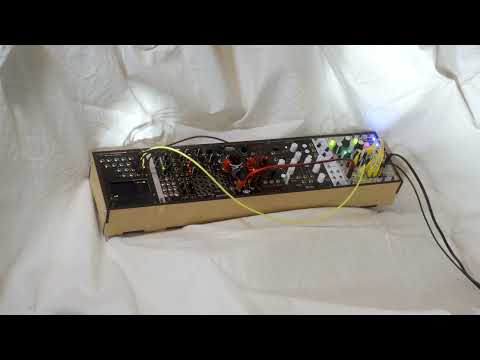 An adjustable AD linear envelope/ LFO with EOC trig out

X control the length of envelope; PARAM knob control the ratio of attack and decay
CV 1 - CV out
TR 1 - End of cycle trigger out

For those interested in how this works, there’s a brief explanation below after the video.

Happy to answer any questions. 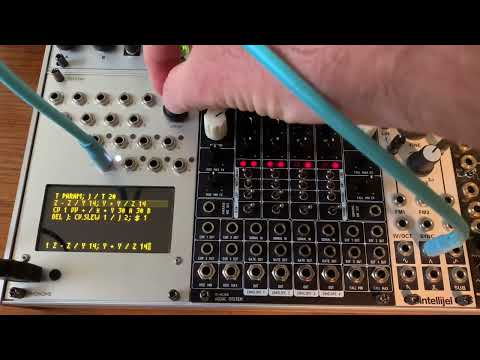 This equations mean that if we take a small time step Δt we can approximate the rate of change y’(t) as:

and we can also write the value of the voltage y(t) as:

We can express these updates in Teletype code like so:

That’s really the core of the script. The above integration can generate a sine (well, technically a cosine) with an amplitude of 1 at a fixed frequency. The rest of the script is for allowing the amplitude to be scaled up and for the frequency to be changed.

The frequency scaling is handled by a temporal recursion using DEL and a variable delay to implement different sized Δt. The rest of the complication is from having to handle lots of small updates when only fixed precision math is available.

The use of 30 here instead of one is one of several “magic numbers” that I had to tune by hand to work within the constraints of signed 16-bit integers and a CV output range of 0 to 16,384.

The value 30 is small enough to allow for a reasonably small amplitude LFO of 0.3V but large enough so that we can numerically integrate using only integers.

Read the knob value and use it as the period of the LFO in milliseconds. Compute a delay size J by diving the overall time per cycle by 20. This is another “magic number” that was chosen by calibration.

This is the main integration loop as described in the pervious section. The 14 is yet another “magic number”. It relates to the earlier choice of 30 for the amplitude of the “base” sine wave. It is chosen to ensure that updates are not too large or small.

Finally, we pause for J milliseconds before updating the CV slew and then recursively calling Script 1. The slew here is chosen to be half the update time so that the “stepping” from the fact we are approximating the differential equation with integer updates is smoothed over.

Runs the metronome at the same speed and phase as a clock input. Starts and stops with the external clock.

Breaking it down:
IF ! M.ACT: M.ACT 1; $ 9
if the metronome is off, turn it on and fire it right away
M LAST $
the classic method of syncing the period of your metro to the incoming clock (how long since this script was last triggered?) [n.b. - this is where you can put multipliers or dividers!]
K 20; J - M K
defining a +/-20ms window of time around the metro ticks where we expect a stable clock to continue landing
IF >< K LAST 9 J: M.RESET
if our clock and metronome are misaligned, re-sync the phase
J / * 3 M 2
how long shall we wait to see if the clock has stopped? (1.5 ticks)
DEL J: M.ACT < LAST $ - J K
if there hasn’t been a clock trigger lately, stop the metronome