what about a variation of SCRIPT op where you could execute a specific line in a script, something like SCLINE script line ?

That sounds great!
It seems like something that would fit very nicely within the general TT logic/ethos.

As far as UI for the grid triggered commands. In my head it just looked like a vertical scroll of numbered lines (or they could be numbered as coordinates of column/row: 1.2, 1.3, etc.). As you scroll up and down to enter the command lines, the given number lights up the corresponding button.

that feels like a pretty special use case tbh, i’d rather have some more generic way of doing this, which to me is just scripting a UI using the existing grid ops. you could implement a sequencer or an earthsea style keyboard with just init and metro scripts, which leaves you with 48 possible lines.

Counter: if you added or deleted a line to a script you had targeted elsewhere with SCLINE it would break the references throughout the rest of your scene.

I don’t know if it’s possible to have arbitrary (can’t remember what they’re really called but the) : operators, to ‘name’ a line. Almost like function/method names.

and then call EX FOO or something to execute.

I am assuming there are very good reasons why Teletype doesn’t support named functions. But, referencing a specific number line in a script seems to be asking for things to break.

We can make rocket ships!

good point, i would argue though that in a limited script space it’s easy enough to find all instances / edit appropriately (could also be done automatically but that would likely cause more issues than solve). also, for some use cases you would simply use scripts as collections of lines, so you would just edit specific lines without moving them. also this fits nicely within the existing system as it doesn’t require any major changes (although the execution context will need to be carefully considered).

regardless, having functions would be very useful. relevant thread:

That makes sense. It just has code smell, to me

but you’re right, this is a small world of 60 lines, and we already make assumptions by calling SCRIPT 2 and such. Updating isn’t a huge burden.

I am also coming to this without much knowledge of the thought & discussion that’s gone into TT development so context like the discussion you linked is awesome.

Also, thanks for what you do! It’s a huge effort. 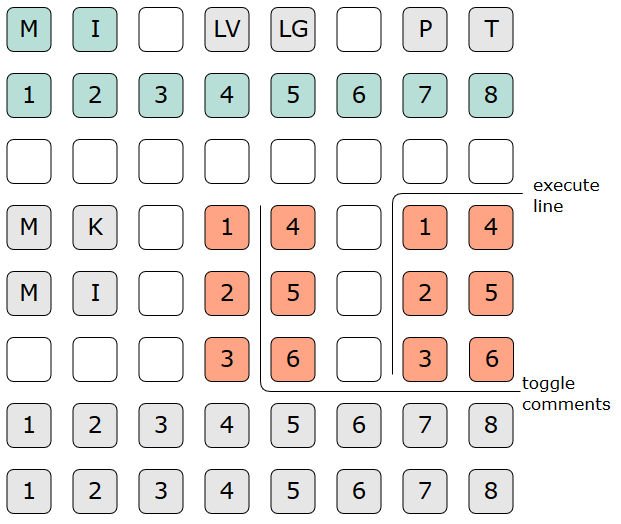 Here’s a usb stick that can be used to emit keyboard codes. It’s sold as a hacker injection tool but it could potentially work for this use case: https://hakshop.com/products/usb-rubber-ducky-deluxe

That’s an interesting prospect, but it looks like it just triggers when you plug it in, where I think the group is looking for a selection of such macros, and some sort of interface to choose between them.

EDIT:
Just found the docs. Let’s see if I can confirm that.
…looks like there’s one button. Might be enough for a round-robin sort of arrangement, or a “execute random script”…

now that you mentioned it: the grid… so like a list of 128 lines of code where each can be played by grid pads…

this would be a much bigger change (imagine the UI you’d need to support the editing mode), but it gives me an idea. what about a variation of SCRIPT op where you could execute a specific line in a script, something like SCLINE script line ? then you could code a scene with earthsea like grid UI triggering specific lines, or even create a sequencer where you sequence which lines to execute.

So, I can imagine the UI for the first idea. Use the second idea in a 128 line script. Just add scrolling to the code editor.

This is totally GOTO, by the way. And I love it. Totally understand if there are technical reasons why it is a terrible idea, but GOTO was my intro to making stuff do things in interesting ways. I was 9. It was the most fun I had ever had up to that point.

So wait, is it part of grid mode already?! Man, I need to catch up!

So wait, is it part of grid mode already?!

you mean executing specific lines from the grid control mode? that hasn’t been done yet, on my todo list.

Well, I hate to mention it, but I recently got a Vortex Race 3 Keyboard and I finally tested out sending the Teletype preprogrammed macros or programmed commands and it doesn’t seem to work.

I’ve updated to the latest firmware, “3.0 KBD Fix”. And when I type, It doesn’t drop any keys. But when I attempt to use the feature of sending key commands via the programming layers the text appears to drop a ton of letters.

For example I programmed the keyboard to write “charlie” when I press the Q key. It works every time on the laptop.

On the Teletype, the first time it writes…

So, it appears to be dropping a lot of letters for some reason. I did test out a time delay function on the keyboard. Where it will type the macros out much slower, with a half second between the letters. But it still drops the keys. So I dont think it must be a refresh rate or scanning rate that is the issue.

Would anyone here have any ideas what might be happening?

I think I remember seeing Scanner Darkly mentioning somewhere about how keyboard protocol is a bit different and odd, so I think this could be one of those oddities.

But any help is much appreciated! I would love to be able to get this working.

I just wanted to report that I picked up a Genovation CP48 for sending keyboard macros to the Teletype and, after a bit of trial and error, I was able to get it to work with 100% consistency!

At first, it acted exactly like the Vortex Race keyboard in that when I sent a macro to the Teletype it only received a small percentage of the keystrokes, even with extremely long delays. But, because the Genovation comes with a pretty comprehensive software for programming it (windows-only) I was able to find the right balance of settings to get it to work consistently with the Teletype.

Luckily, the programming software offered three types of playback modes for the macros. I had to select the third one called Literal mode, where you have to manually program key-down and key-ups for each character. Even still it wasn’t working 100%. Finally, once I added 40ms delays between each key command it all worked completely consistently.

Just thought I’d let ya’ll know! Have a good one!

Here’s a link to the CP48 https://store.genovation.com/programmables/cp48-usbhid.html

thank you for following up and posting detailed info! sorry - meant to reply to your 1st message and forgot. glad you got it working - i don’t think much more could be done on teletype side.

Did you ever managed to get this to work? Curious as I’m thinking of a vortex keyboard to do the same thing too.

I never did get the vortex to work with keyboard macros. I did decide to keep it because it was such a sweet little keyboard for using with the teletype but never got the macros to work. If there was some software side to programming it than maybe there’s a way for it to work but there didnt seem to be much support for that aspect on the site for the keyboard.

I see, what a pity… That said, I’m still interested

Curious how do the additional layers work, do they work where I’d have to hold down a key to get to some keys such as F1-F10? Or does it work in a way where I just push a button and it puts me in that layer (like Cap-Lock)?

I thought I might share this. I am doing a live performance this weekend with the modular. I have been using Teletype to sequence movie clips as well as synth stuff. So, here is my genovation programmable keyboard setup for the show. It’s an all Lebowski set. I’m using it to send macros to the Teletype. 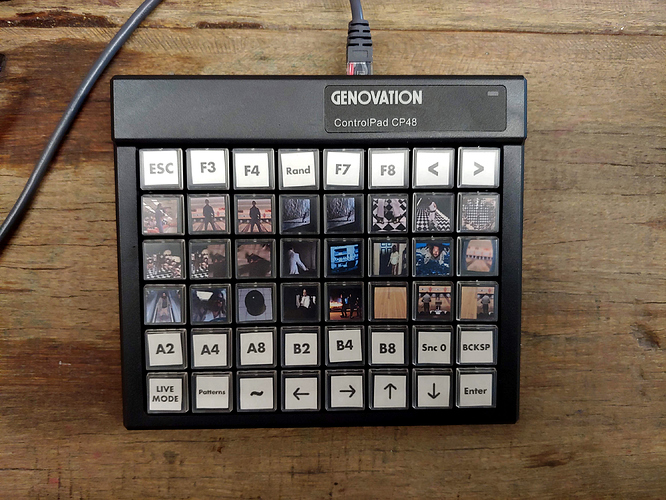 Each of the clip buttons in the center of the controller define variables C and D which basically defines video clip ranges, or which scenes to be triggered and randomized. A2, A4, A8 and B2, B4, B8 define the clock division of two sequencers, the one sequencing the video clips and one sequencing an accompanying synth line. F7 and F8 allow me to basically switch between sequences using patterns 3 and 4 as defining start and end points for patterns 1 and 2. F3 Executes the jump to different sequences and also re-triggers the current sequence. RAND randomizes the pattern between the defined start and end based on the clip ranges dictated by the movie scene buttons. F4 stops the metro and plays a random single video clip based on a clip range which I’ve defined to be only dialogue clips. That way I can stop all the music at once and have a funny dialogue bit then hop over to F3 to restart the music.

best of luck and cheers for such an innovative use of Teletype!!