Hey!
Managed to reverse the power cable for Teletype and one of the pf fuses looked burnt out so replaced it and it still flashes the LEDs weirdly on start up and doesnt boot, but if I remove the fuse it powers up fine? But obviously I dont have the other half of the power supply distributing around the board
Should I also replace the 10u cap and the tiny 100nf cap that comes after the fuse on that side?

If the fuse burnt up, it likely indicates the protection diode shorted. You can remove it (but it will compromise the reverse protection), or replace. They can be blown without any visual indication.

What resistances do you measure from the power rails to ground? What voltages do you see when you turn it on?

Is the fuse the protection? Cant see any diodes for the power section or at all to be honest?
Its PF1 I’ve removed and it powers up and boots as normal but I’m not getting any -12v across the board (as PF1 is removed) I’ve ordered another
If I jumper the fuse I still get the power problem (that wont boot the module and just strobes the LEDs) so will adding the fresh fuse solve this?
Heres a pic 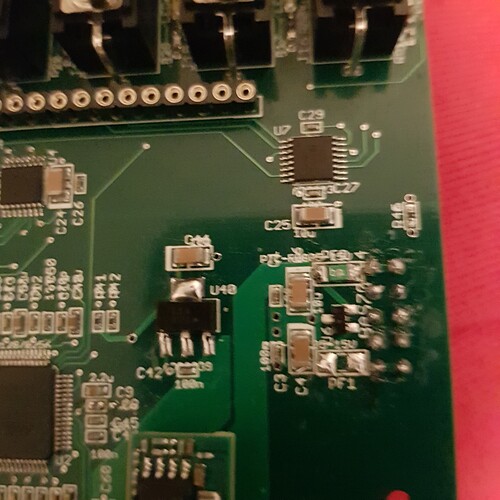 The diode is the SOT23 package between the fuses. BAS70-04 is the part number.

Hard to debug further without some voltage readings though.

Ahhh right sorry I thought that was a power shunt

Changed diode and fuse and we’re back on!!
Thanks for the help!! Ace!!!