I’ve learned to appreciate the vast possibilities contained within the constraints of the teletype. The code haikus lead one down strange paths of graceful gestures and mutated movements. But a twist of fate has lead to my cup running over with a set of teletypes.
A single teletype is a world unto itself. So how do you approach the wealth which this set opens? Does anyone else have two? Do you have interesting tales of cross pollination? One world of melody, one of rhythm? Pools of rules in tidal conflict? I have a few days before my new friend arrives so I’d love to hear your ideas of scripts that bloom too large for one teletype.

wow. i haven’t had a minute to think about what i’d do with two-- there’s so much with just one. please keep us posted what you come up with.

Indeed, there is SO MUCH to do with only one.
But I would love to be able to extend i/o so maybe this is what @michael_matos also wanted to mean.

I also have a related question: is there a memory/size limit for a script ?

limited to 6 lines and a line’s worth of characters.

in the v2 proposal is an open-length number-line based script. we’ll see how that goes.

It arrives tomorrow. I have two white whales so I may attach one to the second teletype. Thinking of how best to start. In a way it is an extension of the first. If I share clock then I essentially have additional cv and triggers out and a grip of additional scripts. Or I could set one up as a trigger and transpose super sequencer and the other as a melody generator and a trilogy manipulator.
I always wanted more outs, but never imagined I’d have two. But a deal too good to pass up came my way, so here I am. I’m curious what some of the limitations others have run into that having another might alleviate.

i’ve got 2 (thanks @tehn!) and hoping to start working on an alternative firmware after finally getting some studio troubles out of the way, but that’s still likely a few months away, and i want to get to some smaller hacks done before embarking on something bigger.

i’ve been simply using them so far separately in 2 different cases, so haven’t really thought of a way to harness the combined power for something more interesting than just doubling the number of inputs/outputs/scripts. a couple of things this brings to mind though:

I actually have a 4 vox that I often pair with my teletype. They do work wonderfully together. As does just friends. I have a reflex liveloop and I’m thinking of what scripts would highlight its features. It’s interesting thinking of it as a smart extension to a specific setup. Using it to cement new relationships between modules and facilitate new ways of interesting with them. It can be the glue that helps a system achieve instrument like qualities.

i’m very curious about the liveloop but still trying to wrap my head around it, but i imagine it’d be useful to set up certain scripts that would serve as macros for some actions, like having one script clean the buffer and arm it for recording, another one serving as a clock to start/stop recording, and another one that would slice it etc etc.

too bad phonogene doesn’t allow clearing the buffer with a gate signal, only a button push…

thank you x1000 for making me look up the liveloop. i’ve been looking for something exactly like it. are you into yours? sorry to hijack the thread!

Ha! No worries. It’s a conversation! I absolutely love it. It is so deep and flexible. So much thought has gone into it. Read the manual. It’s mind blowing. I just ordered another. It’s become my go to sound source. Sandy has hidden magic inside of it.

I love my Teletype. I’ve been having fun using it with single modules, precisely modulating multiple CV parameters simultaneously to create the illusion of several sound sources. And I enjoy the “restrictions” of the syntax – it’s a source of creativity for me.

I’m very curious about what it would be like to add another one to my setup, and writing scripts designed to interact with each other. It feels extravagant, but the TT’s so flexible that it could be programmed to imitate several other module needs I have at the moment (e.g. I’m considering an Intellijel Plog).

Is anyone using two Teletypes, or has tried it out? If so I’m keen to hear about your experiences.

I use two. Got a great deal on a second used so I jumped in. I tend to use one for rhythms and triggers, while the other I use for melodic content and warped cv generation. I started a thread asking the same question but it must be a rare phenomenon. Curious to see what you do with them.

Thanks Michael – I should’ve searched! It’s comforting to know I’m not the only one who thinks it’s a good idea. I’ll post back with my progress if I go for it.

For anyone else who’s interested, Michael’s original thread is here.

I had two momentarily…
it was glorious while it lasted 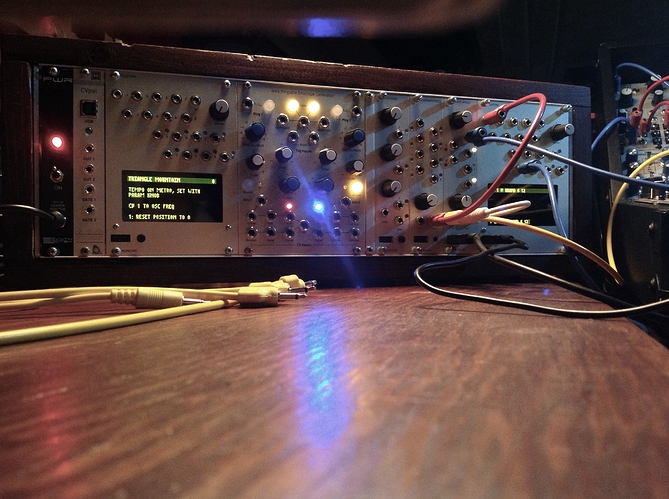 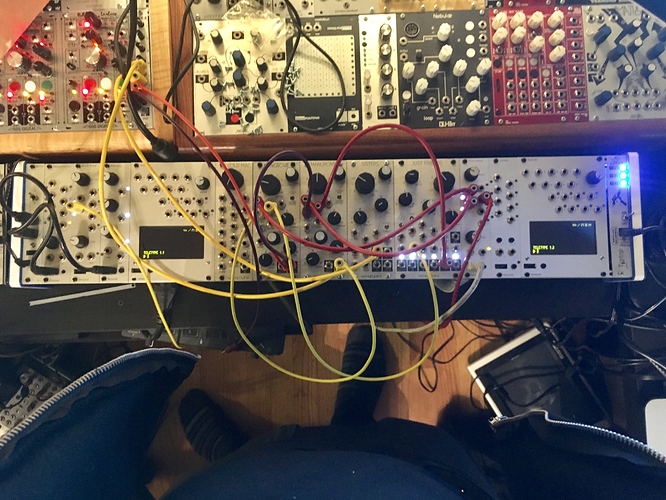 My tele-rig. Have another switch in an accompanying skiff that I can hot swap grids between.

i can barely wrap my head around one TT…

Ha! I didn’t want to lose my scripts! I upgraded to 1.4 this week. Fresh start for the new year. Updated my ansible, my addac 501, and my liveloops. I’m a whole new man!

i can barely wrap my head around one TT…

I still don’t have one, and this is my concern.

And I enjoy the “restrictions” of the syntax – it’s a source of creativity for me.

I’ve always been a wholehearted endorser of the idea of creative constraints, but I’m having this growing fear that I’m going to find this a bit too taxing, at least in terms of being able to quickly and easily generate various outputs, especially given my reticence to code, use command lines, etc.

Cold feet I guess you could call it.

I almost feel like I’m being unfaithful to the most essential spirit of Monome; a traitor even! I’ve come so far! I love my Grid, Arc, Ansible, Earthsea, and Walk, and I utterly accept that Teletype is brilliant…but I’m succumbing to this growing sense of foreboding. I’m not sure I want to invest in something that I won’t properly exploit.

Talk me down from my possible surrender? Push me?

[quote=“Larrea, post:19, topic:3416”]
I utterly accept that Teletype is brilliant…but I’m succumbing to this growing sense of foreboding. I’m not sure I want to invest in something that I won’t properly exploit.
[/quote]you might not need it right now
frankly you might never need it to make the kind of music you want