The Teletype Studies are amazing, but I like to keep a web browser away from my gear. I tried printing them out, but the diagrams, video, etc. waste a lot of ink and paper.

First, I edited the HTML files to remove headers, footers, videos, and links to other studies. I then took the screen diagrams and inverted them to use less ink. I used Acrobat to quickly import these HTML files and generated a slightly messy PDF: TeletypeStudiesPDF 1.0.pdf (2.3 MB)

That PDF is fine, but there are a few formatting issues (notably, some of the tables and images are split at page breaks). I used Pandoc to convert the HTML files to LaTeX: ttStudies.tex (80.1 KB)

Here’s the immediate output of that (which I somewhat prefer over the other PDF): ttStudies.pdf (1.5 MB)

The LaTeX file could be improved (page breaks between Parts, a header for the current part, better formatting of inline code blocks, author listing, etc.), but I spent three hours on this last night which triggered my “Why am I doing this instead of making music?” callback

Also, I know LYX much better than pure LaTeX, and LYX didn’t want anything to do with that file. If there are any LaTeX wizards who want to improve that file and post their output here, it’d be much appreciated!

EDIT: Here’s the awesome, recommended version of the PDF with help from @zebra below

these pngs seem a lot bigger than they need to be, and it takes an annoying amount of time to render them. but i’m not going to bust out imagemagick right now, cause my callback is about to fire too

So, a while back we created this repo to host docs. Obviously not easily discovered!

monome.org/docs. Contribute to monome/docs development by creating an account on GitHub.

Anyway, you’ll notice there are markdown files for the studies there which ought to be closer to what you want… Maybe?

Rats, that would have saved some time stripping stuff out of the HTML files. Still, inverting the images is better for printing, along with the page numbers provided by LaTeX.

well, i’m not an expert but i have done a lot of latex in my life. (mostly from working for my mom, who is a mathematician and uses latex for everything.) id be happy to take a stab at this but i would need the .pngs as well.

\newpage will immediately start a new page. \pagebreak is somewhat counterintuitive, it starts a new page but also spreads the content on the old page out so there’s no space on the bottom.

both seem to to be working as expected on this document, for me. i’m tempted to strip out some of the extra stuff added i guess by pandoc, but it doesn’t seem to be interfering with basic layout commands.

Thanks! I knew I forgot something…

That archive has the updated LaTeX file with .pngs. The updated file has page separation for new sections, paths for same-folder .pngs, and a minor fix for the naming of internal locations.

well, here’s something. i added an author field (though not sure what it should actually say) and used the fancyhdr package to put section name in the left header.

not sure what specific improvement you’re after in the code formatting.

these pngs seem a lot bigger than they need to be, and it takes an annoying amount of time to render them. but i’m not going to bust out imagemagick right now, cause my callback is about to fire too

TBH, i had never heard of LyX before, and now that i’m looking it really strikes me as… i dunno how to put it… one of these front-end tools that obfuscates the thing one is working on, which is also the thing that one actually needs to learn/understand. seems like it could save time if you already have a good working knowledge of tex, but otherwise… hm. i can imagine wasting a lot of time that way.

for an IDE-like experience i’ve found TeXlive to be quite satisfactory (but i’ll admit it’s been a looong time since i used it.)

wow, if an organization has such strict standards for submissions, they really should provide a tex author file / style package / something. all the math journals do this (or say e.g. “use the AMS styles.”)

Given that has gone slightly off topic… I’ve had success with XeTex (& XeLaTex) for modern font support (with fontspec).

It’s included in TexLive and MacTex.

interesting! i did not even know about all these different compilers (xelatex, lualatex.) i am so behind.

in the ttStudes.tex above, there are checks for xetex and lualatex, and a fallback on pdflatex and the fontenc, inputenc packages for unicode. also fontspec and mathspec. and &c. guessing pandoc or lyx adds this, seems crufty? if you want compatibility just use the old ways, otherwise use the new ways?

i actually appear to have all of these compilers installed, though emacs is set to just use pdflatex.

sorry to hijack… this is actually quite helpful for me to figure out.

sam, do i recall correctly that you dislike Computer Modern? (ed: ah right… the word was “detest”

in the ttStudes.tex above, there are checks for xetex and lualatex, and a fallback on pdflatex and the fontenc, inputenc packages for unicode. also fontspec and mathspec. and &c. guessing pandoc or lyx adds this, seems crufty? if you want compatibility just use the old ways, otherwise use the new ways?

Looks like it. Though it’s hard to read the Latex past the other markup that Pandoc is using.

i actually appear to have all of these compilers installed, though emacs is set to just use pdflatex.

I helped format my wife’s thesis at least 5 years back and that was done in XeLaTeX and it was very maths heavy. Back then the maths stuff (AMS) was the hardest to get working properly, I think you ended up being quite limited in what fonts you could use. Everything else just worked. LuaTeX was very new though.

sam, do i recall correctly that you dislike Computer Modern? (ed: ah right… the word was “detest”

Yep, detest sounds about right. Now whether that’s due to stylistic reasons or too many stress dreams about maths problem sheets at uni…

Yeah, all the noise at the top was auto-generated by pandoc.

@zebra, the school had a LaTeX template posted on the Graduate Division website (fairly tucked away, but it’s there). I found out about this, of course, after I submitted the first draft of my paper. The student dissertations posted on my department’s website are not uniform, so I figured I’d be in the clear with my clean document. It definitely now seems like those dissertations are first submissions.

I sat down with a printed copy last night to do a deep dive with the TT and expanders, but now I’m running into all of the i2c issues (lots and lots of freezes). Thankfully, my powered TT backpack PCB is in the mail. Always something!

Don’t know if this would be useful in any way, bug I have the original image files for the TTStudies, if anyone wants them. 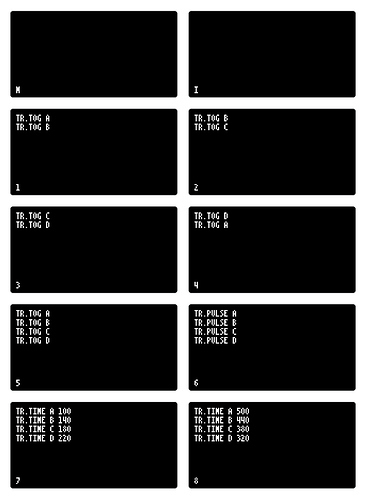 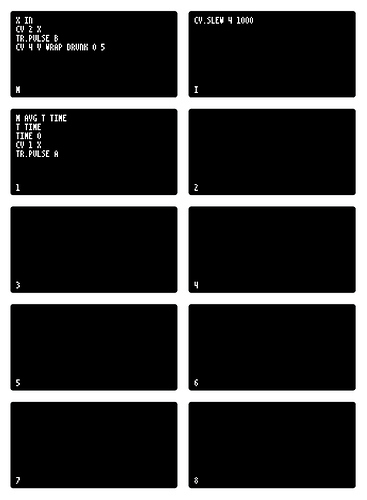 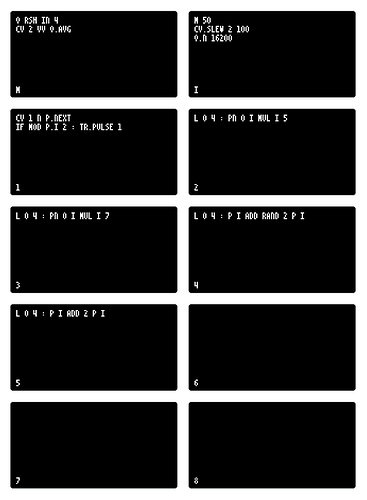 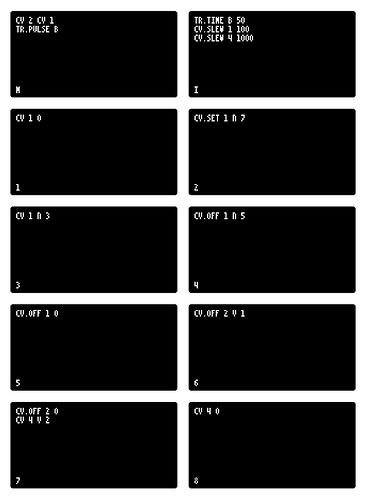 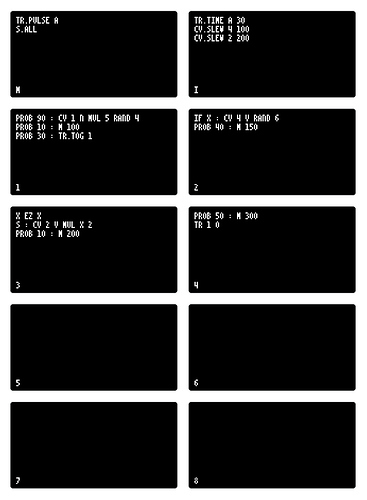 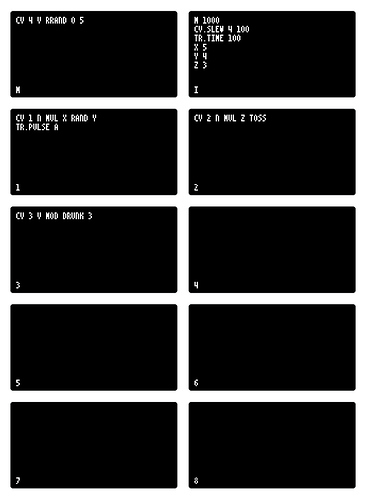 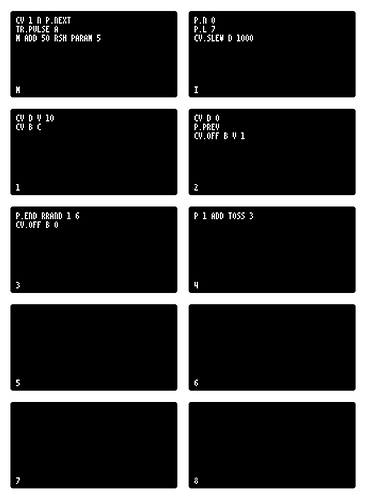 Also, if you need Illustrator files, I can send you that as well.

i love the pdf version of the TT studies so i can print it out! is this also possible with the docs on ansible, earthsea and meadowphysics?
edit: nevermind just saved the whole webpage as an pdf and it works… not that pretty but good enough for me

Has this had important changes in the last year? I guess I’ll just use this untill I run into something which might be different, thank you!

Has this had important changes in the last year? I guess I’ll just use this untill I run into something which might be different, thank you!

You should be fine. The TT Studies are written for firmware 1.0, but I’m pretty sure that nothing was broken.

Thanks to everyone who put their time in on this project. I am new to the Monome universe and having a physical copy of the Teleype Studies will be a very helpful study aid for me.