I recently (well, yesterday) learned about tenor guitars. Has anyone ever tried one? I am thinking about picking one up because they seem ideal for the ambient style of guitar playing I like. Having a 5ths tuning really makes chords sound more open, and if I got used to playing one I wouldn’t be as confused when I switch between my guitar and mandolin

There’s also a tenor baritone which is very tempting. I’ll also admit that I’m a big Warren Ellis fan, so that may be a bit of a factor…

Been curious about them for a while but I’ve never played one. All-fifths tuning sounds intriguing. Are you aware of any specific recordings one might want to check out?

I’m gathering that the tenor guitar is in a similar pitch range as a standard guitar?

I’m really liking the pitch range of the baritone tenor. Somewhere between bass guitar and standard guitar, if the one video I just watched was any indication.

I own one of these: http://www.acousticmagazine.com/reviews/gear-reviews/vintage-viaten/

Which I bloody love! I play double bass in a folk band, but we often get random tiny gigs (aboard old ships, in tiny folk clubs, in dylan thomas’ old living room)… And for that it’s perfect. I also play bass for some singer-songwriters, and this adds a nice extra dimension to songs that don’t need the low end.

I tune mine GDAD, which is an octave lower than a mandolin (Which I also play a bit of in the folk band), but with a D on the highest pitched string. It gives a great open sound, very mellow, very full, but quite different to a parlour guitar or folk shaped guitar. I definitely recommend open tuning for the instrument as it just sings.

The viaten is amazing bang for buck - I played a few different makes before choosing a “cheap” brand, and this just sings. I’d love a 1930’s Martin tenor, or custom archtop, but for less than the price I charge for a day of studio work, I got an amazing instrument.

Semi-related: I have a baritone Telecaster that is one of my favorite instruments. I have it tuned B-to-B, and it sounds fantastic running through effects. There’s a nice contrast between the lowered tuning and the jangly Telecaster pickups.

The viaten is amazing bang for buck

It really is very affordable!

I don’t use my bass and my guitar enough to justify getting another stringed instrument (and I lack space too), but the two things that I’d really like to get at some point are the Eastwood Warren Ellis Tenor Baritone and/or a Bass VI… Both seem to have the good points of both bass and guitar for me. But yeah, maybe when we have a big house or something (not likely to happen while living in Tokyo

I already tuned my guitar in fourths and I like it more than the usual tuning, so a tenor tuned in fifths would probably be a good match for me…

i have an eastwood warren ellis with the dual pickups. it’s completely great, by far the best instrument purchase i’ve ever made. (though, i haven’t found personally much use for the humbucker; the blade pickup sounds really good by itself. but i’m not going for twang or jangle.)

tempted to get a second one (or astrojet) to have CGDA and low GDAE on hand. maybe someday.

it seems to be able to take a pretty wide range of gauge / tensions. it shipped in CGDA with 0.09" on the a-string, which was both a little thin sounding and prone to breakage. i took it all up a notch, something like 0.36, 0.26, 0.14, 0.11. i think it could go thicker but a little wary of warping something.

not pre-realise or hype but Eastwood made a new electric tenor guitar to celebrate their 10y collab with Warren. Love these simple and straightforward instruments, they are probably the easies way to tap into the world of electric guitars even if you are not a guitar hero yourself. This however is not the model I would suggest for everybody. As they volume pot is removed you will always go directly into the amp hot and I think you need a rather specific personality to do that convincingly. 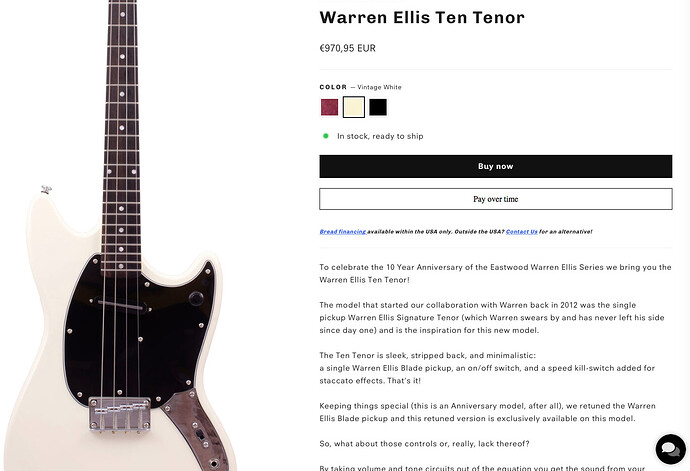 I don’t think I ever heard an electric tenor guitar. My only experience with tenor guitars was when Jason Molina used them - and he did so very convincingly

is that not a bass guitar? i’ve never seen a 4 string guitar, looks cool tho

is that not a bass guitar?

they do have a bass guitar also but this is a tenor guitar that is in a way the opposite of the bass guitar. If you take the four lower strings of standard guitar tuning you’ll get a bass guitar. However if you take the four higher strings you will get what is called tenor baritone guitar. If you then shorten the scale by about 5 frets you will get this tenor guitar (yes it’s shorter than it looks). Tenors guitars were more popular during the big bands era and mostly forgotten after that until Warren Ellis started his collaboration with Eastwood. Fender also did a limited run of electric tenors few yers ago but they somewhat messed it up so Eastwood is the best option for this type of instrument as of now. This celebration model is even more specialised as it has removed volume and tone pots and replaced these with two on-off switches for straight to amp experience.

If you want to see the life size comparison of this instrument check the lunch scene from the “10 000 days on earth” film where Warren holds it when talking about Nina Simone concert with Nick.

I saw Neko Case playing a beautiful vintage tenor Gibson SG years ago and from then on I’ve toyed with the idea of getting hold of one. I slept on the original Eastwood tenor so this is pretty tempting!

If you take the four lower strings of standard guitar tuning you’ll get a bass guitar. However if you take the four higher strings you will get what is called tenor baritone guitar. If you then shorten the scale by about 5 frets you will get this tenor guitar (yes it’s shorter than it looks). Tenors guitars were more popular during the big bands era and mostly forgotten after that until Warren Ellis started his collaboration with Eastwood.

I have been wanting a Warren Ellis baritone tenor for a while now. I managed to score one of the Fender Tenor Telecasters and I really like it. Had to add a string tree to fix the break angle on the higher strings but it sounds great now. Eastwood seems to be the best source for a decent electric tenor these days but I recently came across Ludo Guitars out of Moncton, NB and he seems to be making some nice tele style tenors.

Share your videos with friends, family, and the world

I managed to grab an Ellis Tenor Baritone a few months back. I had a Reverb alert set up for like a year and half and finally managed to find one a little under retail price. I’d definitely recommend it! It’s fun and easy to play.

I think it’s also worth mentioning that it is supposed to be tuned in 5ths (at least it says so on the Eastwood home page).

Curious as to what advantages a tenor guitar might offer over a standard guitar or if it’s mostly about feel. I’m guessing (tuned the same) a standard guitar with a capo and the top 2 (fatter) strings removed would theoretically sound the same right? Wikipedia gave me a clue that mentioned Ellis preferring it when playing finger picking style. Just wondering if I’m missing something. They do look like a joy to play.

Smaller size and lower weight sounds like the ´objective’ advantages over using a capo. But there’s also something to be said for the creative constraint of fewer strings — it’s the kind of thing that makes you think differently.

i’ve had a tenor baritone for a while now and got a goldtone acoustic tenor a bit ago. both tuned in fifths (C-G-D-A). i’m a cellist so these are a rosetta stone for me playing guitar. i could see why Ellis prefers it for fingerpicking, the strings are spaced further apart than a standard guitar, so a bit less precision is needed.

worth mentioning - tenor guitars were created by bolting a tenor banjo neck to a guitar body. when tuned in fifths, the chord voicings of a tenor naturally complement a standard guitar voicing without much extra thought. slots into a band real easy.