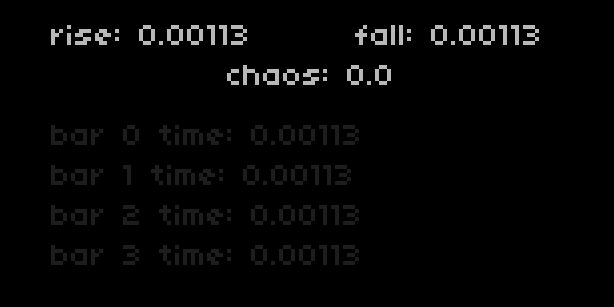 note: requires the shnth library for norns, which can be found here

In the tradition of @Justmat’s wonderful otis, this is a very loose adaptation of Peter Blasser’s Ciat-Lonbarde Tetrax Organ. The principle is the same: 4 wooden bars each elicit a triangle wave with variable slope when touched. The rise and fall times can be changed independently of one another (for those more familiar with the world of Eurorack, you might think of this as something like a Maths or other voltage-controlled envelope generator running at audio rate), to shift between saw, triangle, and ramp shapes but also to determine overall pitch. Each bar also has its own independent pitch control, whose value is added to the master rise and master fall time values to determine the pitch of the oscillator expressed by that particular bar. Bars are numbered 0-3 (not 1-4).

Additionally, there is chaos. When chaos is increased (in either a positive or negative direction), modulation is gradually increased from one oscillator to the next in a circular pattern (read: FM). It gets noisy. You can control all of these parameters either from the parameters menu, with midi-mapping (for example, if you wanted to recreate the experience of pitch sliders on the Tetrax Organ, you could map bar pitches to sliders on a 16n faderbank or similar device), or with norns’s knobs and encoders. K1 increases the resolution of all 3 norns encoders 10x, for fine tuning of their associated parameters (for example: to fine-tune the pitch of bar 0, hold K1, hold K2, and turn E2).

With thanks to @alanza, who provided invaluable help and guidance throughout every stage of this script’s development, especially with regard to the SuperCollider engine

note: you will need to restart norns after installing this script, in order for the synth engine to install

shnth minors halve the time of their corresponding bars

shnth majors double the time of their corresponding bars

chaos, master rise, master fall, and each bar’s time can be modulated with LFOs in the params menu

thanks for letting me be part of making this! it’s been awesome to see it grow

this is awesome! gonna load it up tomorrow

Can’t wait to check this out!

I’m in the process of cooking up something bigger pertaining to this script (spoiler: it’s a fork), but along the way, I pushed a minor fix and updated the version number in case it causes any unforeseen bugs. But it really shouldn’t: I just moved “fall” a little over to the right. The asymmetry was bugging me. So if it was bugging you too, I’m happy to report that it looks a little nicer now