That one, little module

yes to Maths - in theory there are so much more compact ways I could achieve the same thing more or less, but I dunno - something about the whole design and layout I just can’t let go of, I love it.

I really want to try one of those or the Doepfer equivalent, especially since I’d love to also start combining modular with guitar/bass where my hands won’t be free all the time. I was imagining it being handy for moving between patterns in Kria or triggering scripts on TT.

I was imagining it being handy for moving between patterns in Kria or triggering scripts on TT.

Walk was developed as an ideal companion to Teletype, though also pairs well with White Whale for manually stepping through sequences, becoming a 16-stage memory bank.

Not little either, but Voltage Block is super versatile and fast / easy to use. Is typically in the middle of every patch breathing life into everything.

Marbles for me. Tweaking scale and bias on the CV side and bias on the trigger side (with the “grids-like” mode on) can really transform what your system is doing whilst somehow magically make it sound musically related.

Mind you, I’d also find it hard to do without the disting mk4. I ended up getting two, even in my limited space…

Marbles for me. Tweaking scale and bias on the CV side and bias on the trigger side (with the “grids-like” mode on) can really transform what your system is doing whilst somehow magically make it sound musically related.

Mind you, I’d also find it hard to do without the disting mk4. I ended up getting two, even in my limited space…

it’s definitely become Marbles for me too (see remarks I’ve made on this module uh everywhere else), as Marbles takes the place of a lot of ideas I had in Reaktor and Max/MSP, and generally does in better.

I think Shades definitely deserves mention here (as it already has been), probably never leaving my rack.

a year ago I might have said Telephone Game, which I’m still trying to get back in my rack.

Pulses, Turing machine’s qenius little expander, is one of my favorite modules and drives most things in my setup.

Did you see this video at around 32mins?
https://youtu.be/XB5c3D-rWtY

You should check out the max msp version too.
https://docs.cycling74.com/max7/maxobject/tanh~

I use it mostly for interesting tonal shaping and feedback from which some patches then evolve.

A bit of divergence from the utilities being posted in here; beyond the Batumi my SSF/WMD Multimode Filter is a centerpiece of most patches.

I use Maths, Batumi and Cold Mac (and cross patch between them) in virtually every patch these days.

I recently acquired an MMF on recommendation, and it seems… fine? Would you mind sharing a little about why you are particularly fond of it?

Maybe my heavy use falls in line with the timbral spectrum of my system. I’ve just been able to flush out scraping metallic FM sounds along with drones using a single oscillator. It fills out sonic space if you dial it in right and use the cv parameters right, not to mention how well it filters grimy acid basslines with the benefit being pinged. I suppose the same could be said for similar filters but I’ve grown fond of mine.

the noise reap lfo is amazing - I didn’t see the point in having mirrored outputs until I figured out I could do stuff like have the resonance of a filter increase while the cutoff freq decreased, etc.

it’s hard to pick one module specifically…but I think because delay is a core foundation of what I do, I’d have to say my echophon. it’s like a regular digital delay / pitch shifting pedal, but completely deconstructed.

Frames for sure. I struggled with whether to get the full sized version or a Plancks for quite a while until I decided that this module would likely become an important centerpiece and was worth dedicating the space and getting better control of it. I’m glad I did; it’s well worth the hp and it’s one of those modules that seems limited only by your imagination. I really love using it along with Compare2 as a drum sequencer, sending Frames’ offsets to the shift and size inputs to create several different rhythms and scanning through them.

For me it’s the Verbos Scan & Pan. It’s the module I’ve owned the longest, and the one that is always used—of course, it’s my main mixer, so that might be part of it! But beyond that, it’s helped me dedicate my standalone VCAs to modulation use since each channel has one built in, it has great gain saturation for coloring which helps me get more out of simple waveforms, and the scan/pan/width controls let me use the mixer in so many different ways. I can use it as simple stereo, but also sending to different effects and wiping between them, or as wet/dry instead of L/R, or as a kind of rough cadavre exquis. It constantly inspires me to patch differently.

I’m out of the eurorack game now, but when I had a full system Blinds was the game changer for me (partnered with Quadra+Expander and Batumi, lots of cross-patching between all three). Being able to modulate modulation intensity with other modulation sources became a key part of how I thought about patching my system.

Idk what it is about Batumi… I keep trying to find a replacement, thinking I can go without it… It just keeps coming back. I cant do anything without it. It keeps me hostage with its slidery goodness. 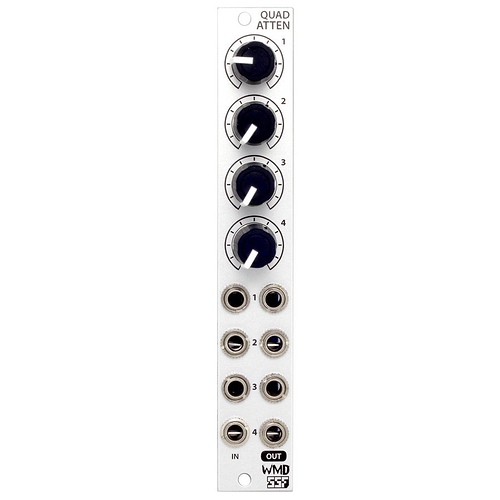